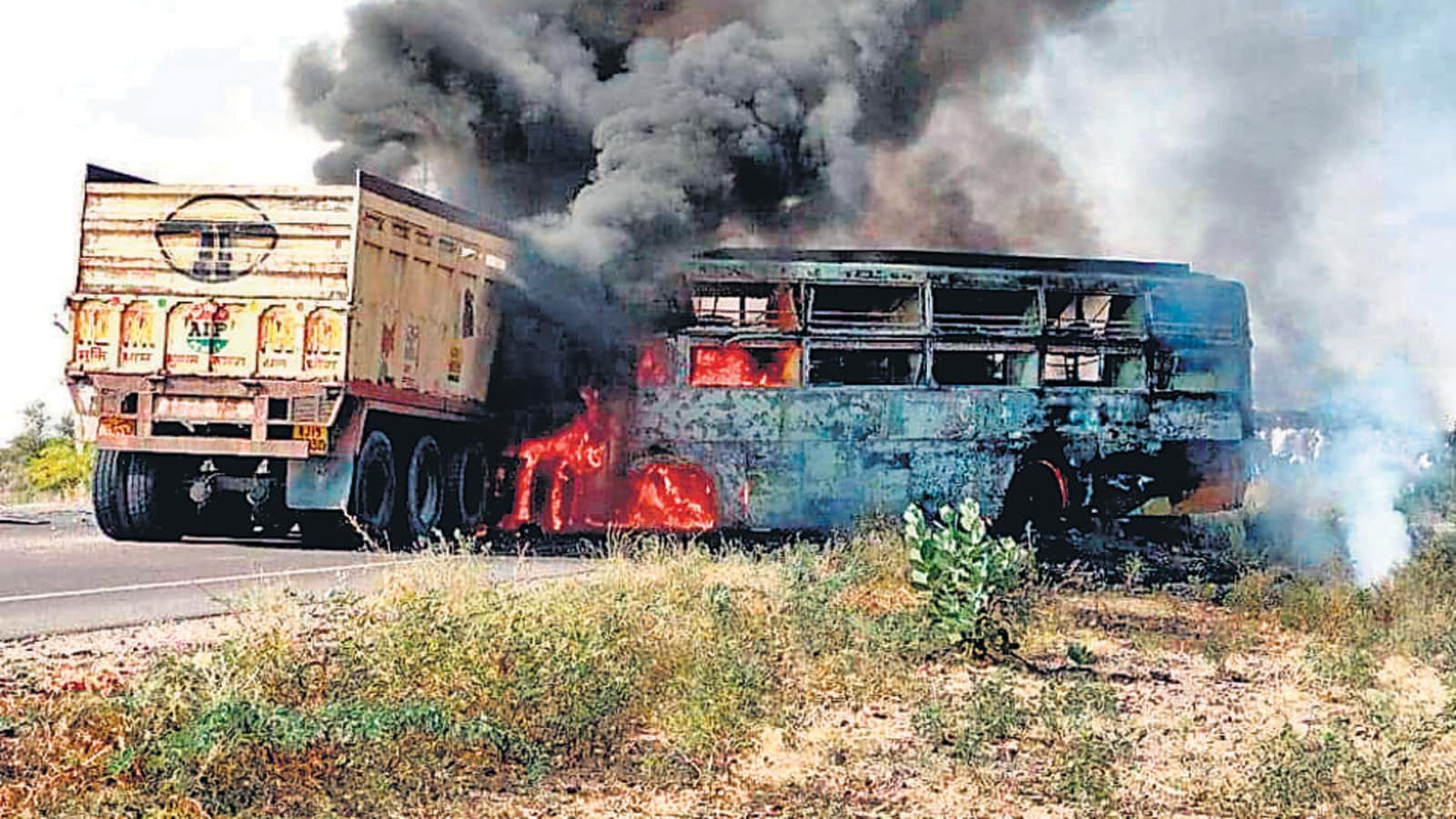 At least 12 people, including an infant, were burnt to death and 38 others injured in a fire tragedy triggered by the collision between a passenger bus and a truck in Balotra, Barmer district on Wednesday, Rajasthan Police said.

The accident took place near Bhandiyawas village on the Barmer-Jodhpur National Highway under Pachpadra police station of Barmer district around 11 am when a truck trolley crashed into an oncoming bus from the opposite direction with at least 50 passengers from Jodhpur. Both vehicles caught fire immediately after the collision, killing 11 people, including the truck driver, on the spot. One more person succumbed to injuries at a government hospital in Balotra, said Deepak Bhargav, Barmer superintendent of police (SP). Five fire tenders were rushed to engulf the fire, he said.

Of the 38 injured people, 20 are being treated in Barmer, and 18 others are admitted to government and private hospitals in Jodhpur. Two of them in Jodhpur are in critical condition, the SP said.

The SP said it appeared that the truck was overtaking a vehicle and didn’t see the bus coming and rammed into the latter at a very high speed. ”The fire probably happened because of the impact. The confirmation can happen only once the forensic report comes,” he said.

The SP further said the police could not identify the deceased people as the bodies were charred beyond recognition. “We have sent the bodies to Jodhpur for DNA sampling, which will be sent to a forensic lab in Jaipur for profiling and matching,” said Bhargav.

“The bus was full of passengers,” Shahrukh, one of the passengers on the bus, told reporters in Jodhpur. Another survivor told reporters that he was sitting in the rear side and jumped out of the window. He said that those sitting at the back managed to jump through windows and save their lives. Those in towards the front got trapped.

Soon as the news went viral, family members of the passengers were rushed to hospital. “I have never seen such a heart-wrenching scene,” said one of the eye-witnesses.

Expressing condolence, Prime Minister Narendra Modi announced ₹2 lakh ex-gratia to kin of deceased and ₹50,000 to the injured. The Prime Minister tweeted, “It is saddening that people have lost their lives due to a bus-tanker collision at the Barmer-Jodhpur Highway in Rajasthan. In this hour of grief, my condolences to the bereaved families. I pray that the injured have a quick recovery.”

“An ex-gratia of ₹2 lakh each from PMNRF would be given to the next of kin of those who lost their lives due to the accident at the Barmer-Jodhpur Highway in Rajasthan. The injured would be given ₹50,000 each,” he tweeted.

In Odisha, over 10,000 villages are now free from child-marriage