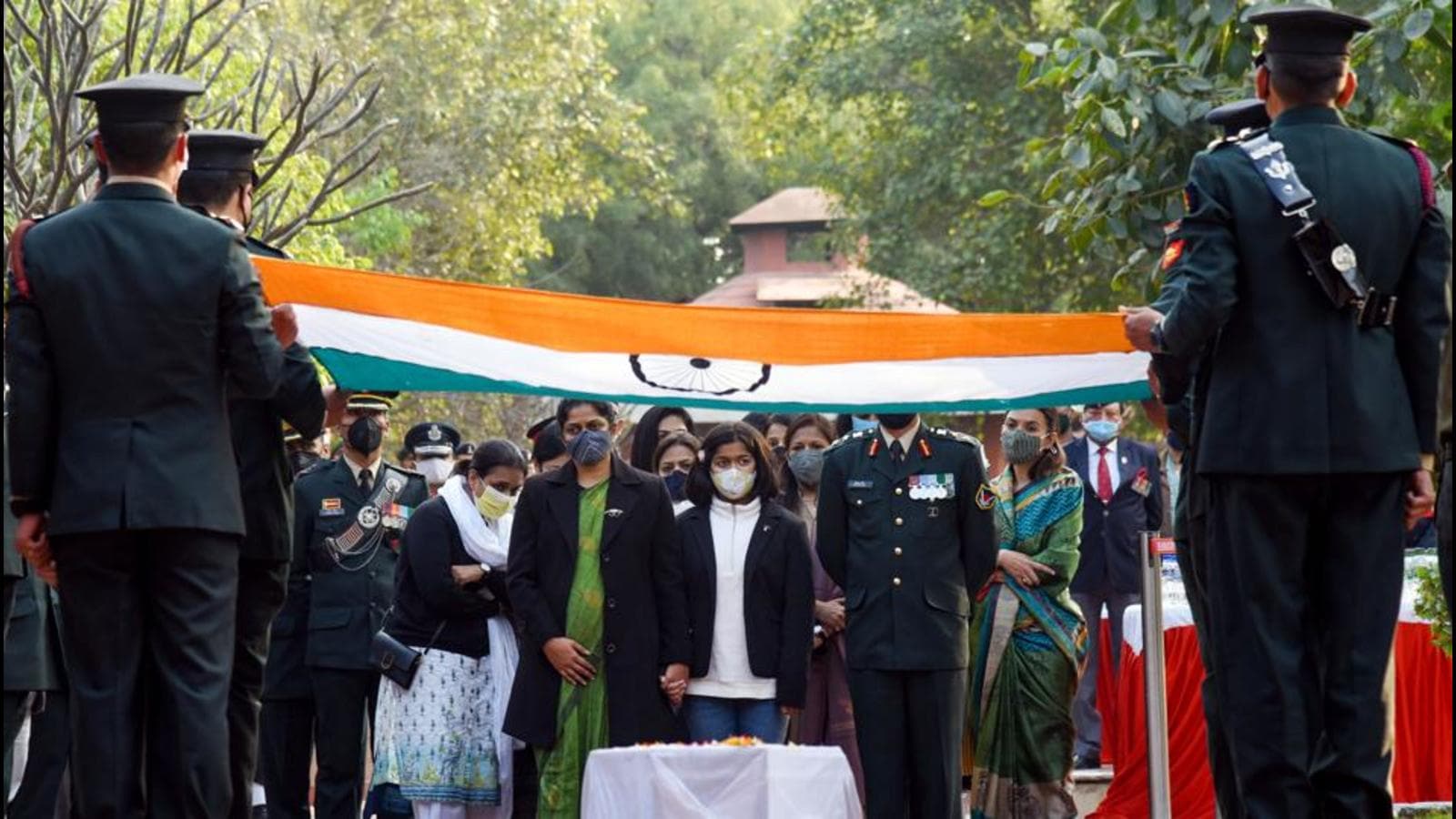 Twelve-year-old Preet Kaur on Sunday performed the last rites of her father Lieutenant Colonel Harjinder Singh, who was chief of defence staff (CDS) General Bipin Rawat’s staff officer and killed along with him and 11 others in a helicopter crash near Coonoor on December 8, at Brar Square in Delhi Cantt in a sombre ceremony attended by defence minister Rajnath Singh, the three service chiefs and several military officials.

The 43-year-old officer, called Harry by his friends, was commissioned in the army in September 2001, and had served along India’s borders with China and Pakistan as well as the country’s North-east in his 20-year army career.

The defence minister offered condolences to the lieutenant colonel’s family including his wife Major Agnes P Menezes (retd) who had attended the funerals of General Rawat, his wife Madhulika and the CDS’s defence assistant Brigadier LS Lidder at Brar Square two days ago when her own husband’s body was yet to be identified.

The bodies of 10 soldiers killed in the Mi-17V5 crash, including that of Lieutenant Colonel Singh, were identified only on Saturday after genetic testing.

Rawat was on a visit to the Defence Services Staff College (DSSC) at Wellington to address the faculty and student officers there when the chopper crashed.

Earlier in the day, General Rawat’s daughters Kritika and Tarini set their own grief aside and visited Lieutenant Colonel Singh’s residence in Delhi Cantt to comfort Agnes and her daughter Preet, in a remarkable display of strong bonding within the armed forces fraternity. Kritika’s husband Ankit Singh accompanied the Rawat sisters, who had immersed the ashes of their parents in Ganga in Haridwar a day earlier, to Lieutenant Colonel Singh’s home.

“Paid tributes to Lt Colonel Harjinder Singh, who died in the tragic helicopter crash in Tamil Nadu. His untimely demise is extremely saddening. My deepest condolences to his family and friends. May God give them strength to bear this massive loss,” the defence minister wrote on Twitter.

The last rites of General Rawat and his wife, Brigadier Lidder and Lieutenant Colonel Singh were performed by their daughters, who have shown uncommon courage in the darkest hour of their lives.

Thirteen people were killed in the Coonoor crash. The only survivor, Group Captain Varun Singh, is battling for his life at the Air Force Command Hospital at Bengaluru.

Prime Minister Narendra Modi on Thursday paid his last respects to the crash victims at the Palam air base after their mortal remains arrived from Sulur in a C-130J special operations aircraft of the IAF.

The Mi-17V5 helicopter took off from the Sulur air base at 11.48 am on December 8, and it was scheduled to land at the helipad at the Wellington golf club at 12.15 pm. The air traffic control at Sulur, however, lost contact with the helicopter at 12.08 pm, 20 minutes after it took off. The chopper was seven minutes away from its destination.

Air Marshal Manavendra Singh, who is the Air Officer Commanding-in-Chief of the IAF’s Bengaluru-based Training Command and the senior-most helicopter pilot in the air force, is heading the inquiry into the crash.

‘Our life revolves around a few hundred metres. It can’t get...