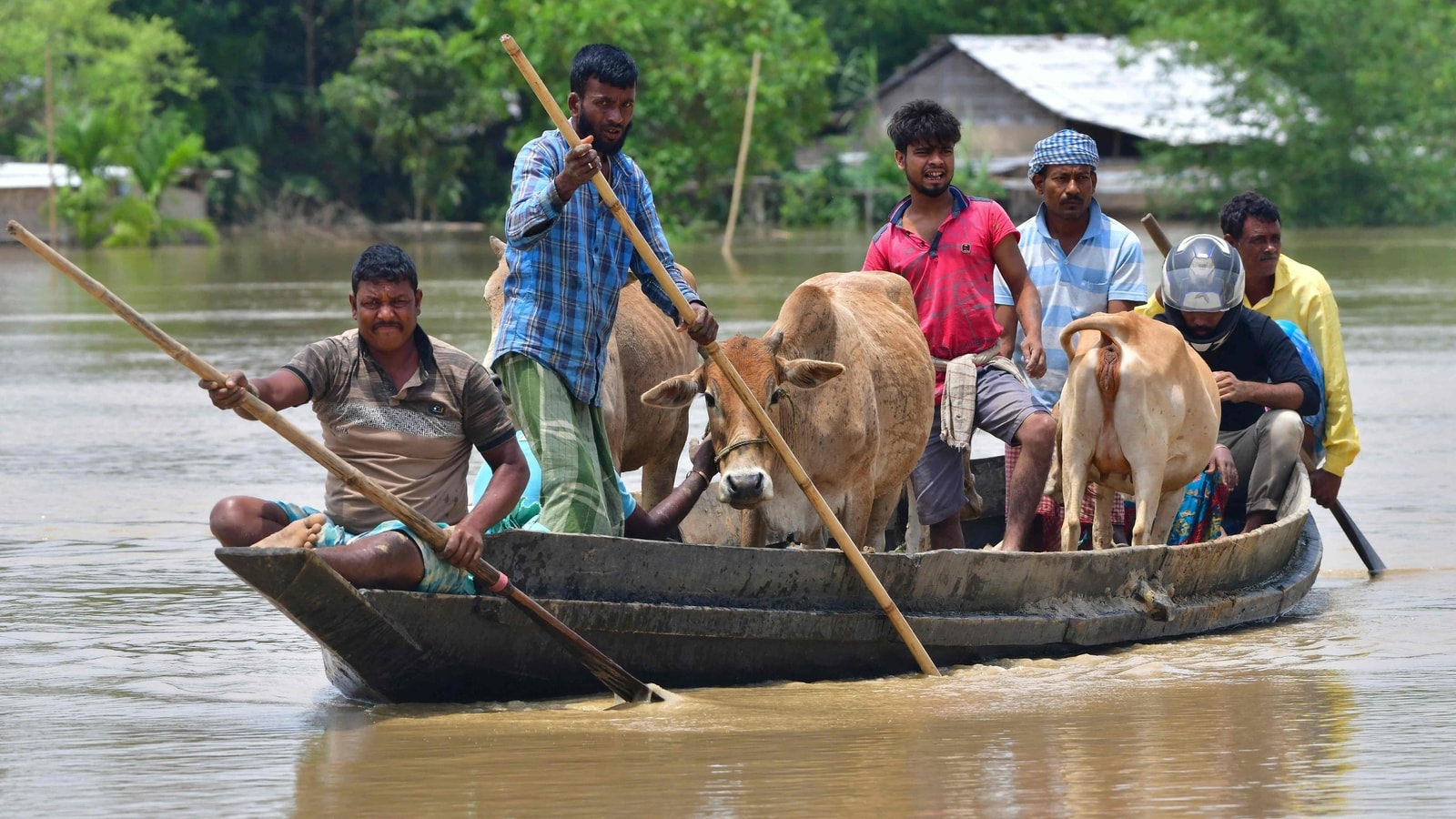 Incessant rain and landslides over the past few days have thrown life out of gear in several parts of Assam. In the latest development, the situation in four districts- Nagaon, Hojai, Cachar and Darrang – still remains grave. According to the Assam State Disaster Management, news agency ANI reported, the death toll in floods and landslides has surged to 14, and nearly 7.12 lakh people in 29 districts of the state have been affected. Karnataka too witnessed flooding in some parts this week amid heavy rain. In Bihar, 33 people have died amid lightning and thunderstorms, and chief minister Nitish Kumar has announced compensation for the families of those killed.

Here are top updates on Bihar, Assam and Karnataka:

1) “In 16 districts of the state, 33 people died due to thunderstorms and lightning. Instructions have been given to give an ex-gratia of ₹4 lakh to families of those who have died,” Bihar chief minister Nitish Kumar wrote on Twitter on Friday night as he appealed to people to remain cautious. “Stay home and stay safe,” he further posted, urging the state to follow steps listed by the disaster management authority.

Watch: This BJP MLA on review work needs a piggyback ride to wade through flooded stretch

2) Prime Minister Narendra Modi too posted condolences on Twitter. “It is deeply tragic that many people died in the incidents of thunderstorm and lightning in many districts of Bihar. May God give strength to the bereaved families to bear this immense loss. The local administration under the supervision of the state government is actively engaged in relief and rescue work,” he wrote.

3) In Assam, according to the state disaster management authority, over 3.36 lakh people have been affected in the Nagaon district followed by 1.66 lakh in the Cachar district, 1.11 lakh in Hojai, and 52,709 in the Darrang district.

5) Torrential rainfall and landslides in the past few days have devastated Haflong- the beautiful city in Assam’s Dima Hasao district. Water on the roads has halted traffic. Flood water has also entered many houses, making it impossible for people to live.

6) On Friday, Chinook heavy-lift helicopters were deployed to help National Disaster Response Force (NDRF) personnel in the flood-affected areas of Haflong to help evacuate the people stranded (due to flood and landslides) in the area.

7) As per an ANI report, 80,036.90 hectares of cropland and 2,251 villages are still underwater and a total of 74,705 flood-affected people are currently lodged in 234 relief camps set up by the district administration.

8) In Karnataka, chief minister Basavaraj Bommai on Thursday blamed record rain and rapid growth in Bengaluru for flooding in the capital city.

9) “The average 15-day rainfall for the month of May was witnessed in just 4-5 hours in the city. It is one of the heaviest rains that the city has witnessed in the month of May in the last 40-50 years. Naturally all the low-lying areas are flooded. This is happening over the last three to four decades in Bengaluru whenever it rains heavily. Though the relief works are ongoing, the rapid growth of the city is making it a tough task to find a comprehensive solution,” he said.

10) Several other rain-hit parts in the state have been affected due to flooding.

(With inputs from ANI, PTI)

Uddhav Thackeray-Eknath Shinde tussle set for legal battle: All you need to know

Rahul Gandhi will be questioned again on Friday over National Herald...

Man gets 20 years for planting IED at Mangaluru airport

One Assam Rifles jawan killed, another injured in Manipur blast

Aaditya Thackeray arrives in Lucknow ahead of Ayodhya visit| Watch