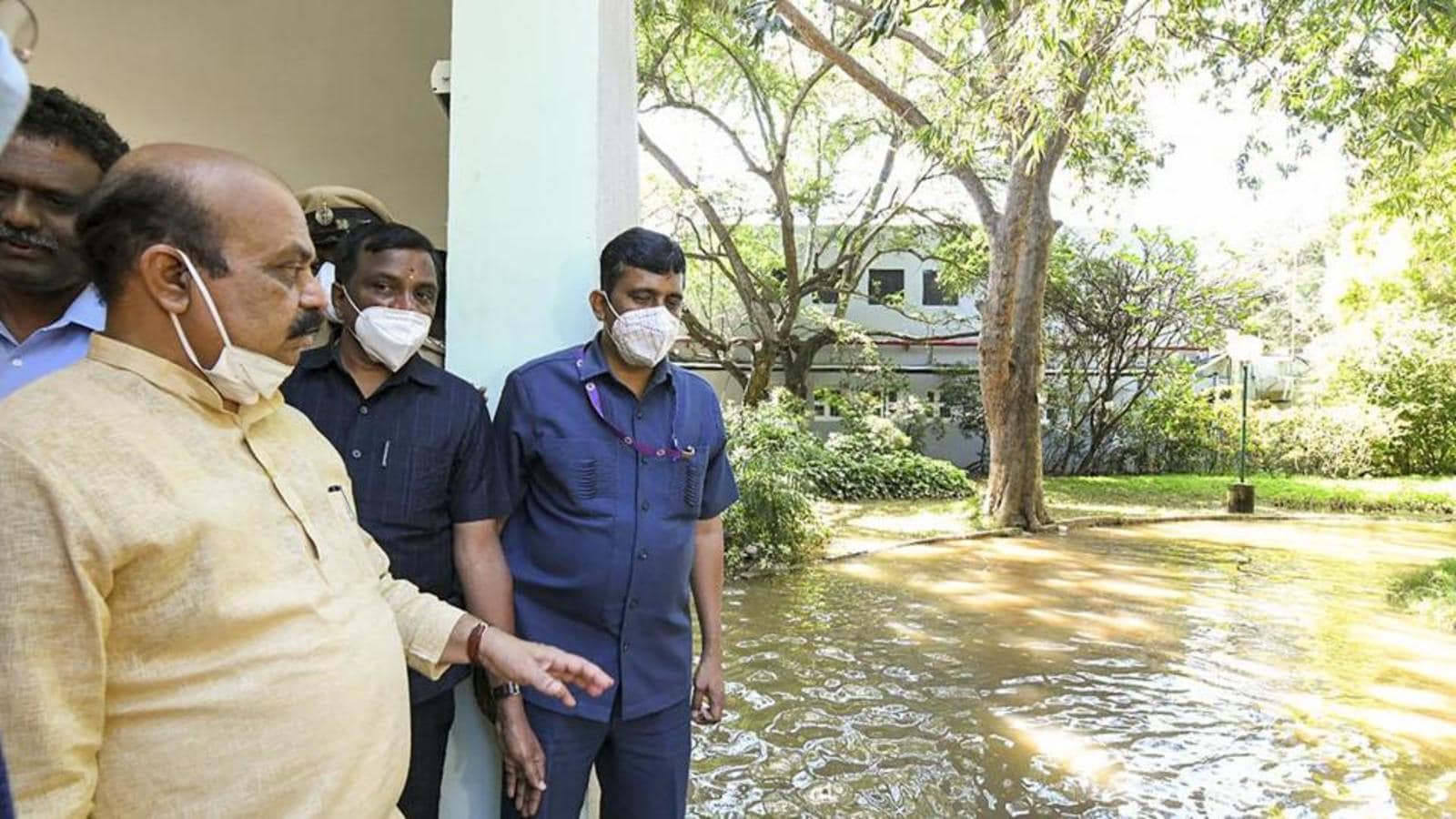 For 56 -year-old Sudheer Dhar, the harrowing experience of floods in Kendriya Vihar apartments in Yelahanka continues even as disaster management teams try to pump out water from the premises.

The entire complex with over 600 homes was flooded after a heavy downpour on Sunday night that led to the overflowing of the nearby lake, inundating the entire residential locality. Over 130 mm of rainfall was recorded in the Yelahanka zone on Sunday night alone.

“For the last four days, there is no power or water,” said Dhar, who had just managed to charge his phone for two hours in a shop nearby on Tuesday evening.

He said though the people of the apartment complex and disaster relief were doing all they can to help the stranded residents, people were “suffering”.

The residents were provided with food and bottled water by volunteers on Monday. But on Tuesday, volunteers dropped off large water cans at the ground floor, forcing the likes of Dhar to walk down from his eighth-floor apartment and carry it back up as the lifts are down and power is yet to be restored.

“We are very worried about the pandemic as there is (stagnant) water. Dengue and malaria are increasing and there are many elderly people residing here,” he added.

Dhar’s 78-year-old mother is living with him and he has sent his son to a relative’s residence as he has to work from home.

Several others shared the plight even as relief workers continue to toil and restore some semblance of normalcy after the recent downpour in Bengaluru.

From November 1-21 (till 5.30 pm), Bengaluru has received over 195 mm of rains as against the average of 42 mm in the month, registering an excess of 364%, data from the Karnataka Disaster Management Authority (KDMA) shows.

Almost every single district of Karnataka has received excess rainfall with 21 out of 31 receiving over 200% more rains this year.

At least 24 people have died and lakhs of hectares of crops have been lost, thousands of homes have been damaged in the rains which has left a trail of destruction across the southern state and several other parts of the country.

Bommai on Tuesday said the overflow from the lakes and inadequate size of the Raja Kaluve or storm water drain (SWD) were the main reasons for the floods.

Residents said there was a similar incident in 2017 and around ₹4 crore were allocated to “fix” the problem, which apparently was not.

Much of Bengaluru, which contributes over half of the state’s revenues and is known globally for its prowess in technology, has remained one of the most poor in terms of public infrastructure, planning and regulations, leading to such incidents.

It would not be wrong to say that there isn’t a single road in all of Bengaluru that does not have a pothole in it or in some cases no road at all as motorists and pedestrians risk nothing short of their lives each time they tread these streets.

Bengaluru has had 18 deaths due to civic apathy in 2020, according to National Crime Records Bureau (NCRB) data, that is more than all other major cities combined many times over.

“About 138mm of rains lashed the city in just 2 hours recently. All the lakes in and around Yelahanka are overflowing. The situation is the same in many parts of the city. The existing Rajakaluves with a width of 8 to 10 feet are proving to be inadequate to carry the heavy flow,” Bommai said. He has instructed officials to fix the problem–an assurance the likes of Dhar have heard before.

Rapid and unplanned expansion with the complicit approval of civic bodies has led to encroachment of natural canals, lakes and drains, leaving little or no space for rain water to flow.

“BBMP had identified 714 illegal structures on Rajakaluves. Houses and buildings which have come up on Rajakaluves would be evicted. However he assured that care would be taken to ensure that the poor are not affected by providing them alternative facilities. Houses and residential complexes on the Buffer Zones would be shifted after giving them adequate time to move,” Bommai added.

The chief minister has retained the Bengaluru development portfolio.

But successive governments claim to spend, at least on paper, several thousand crores to improve the infrastructure under the guise of development which has little or no impact. The city continues to crumble, forcing its over 12 million residents who live and migrate to the city in the hope for a better life.

The Bruhat Bengaluru Mahanagara Palike (BBMP, the city’s civic body) on Tuesday held a meeting on how to prevent such incidents in the “future”.

“During the rainy season, in the Kaluves, Drains on either sides of the road and in the shoulder drains all the waste should be cleaned and ensure that water flows smoothly. Due to the digging of the roads,” he said, according to a statement by the civic body.

Meanwhile, Dhar sits in a dark room with his immobile mother hoping that at least this time, things would be different.

All preparations in place for conduct of PU exams: K’taka Education...