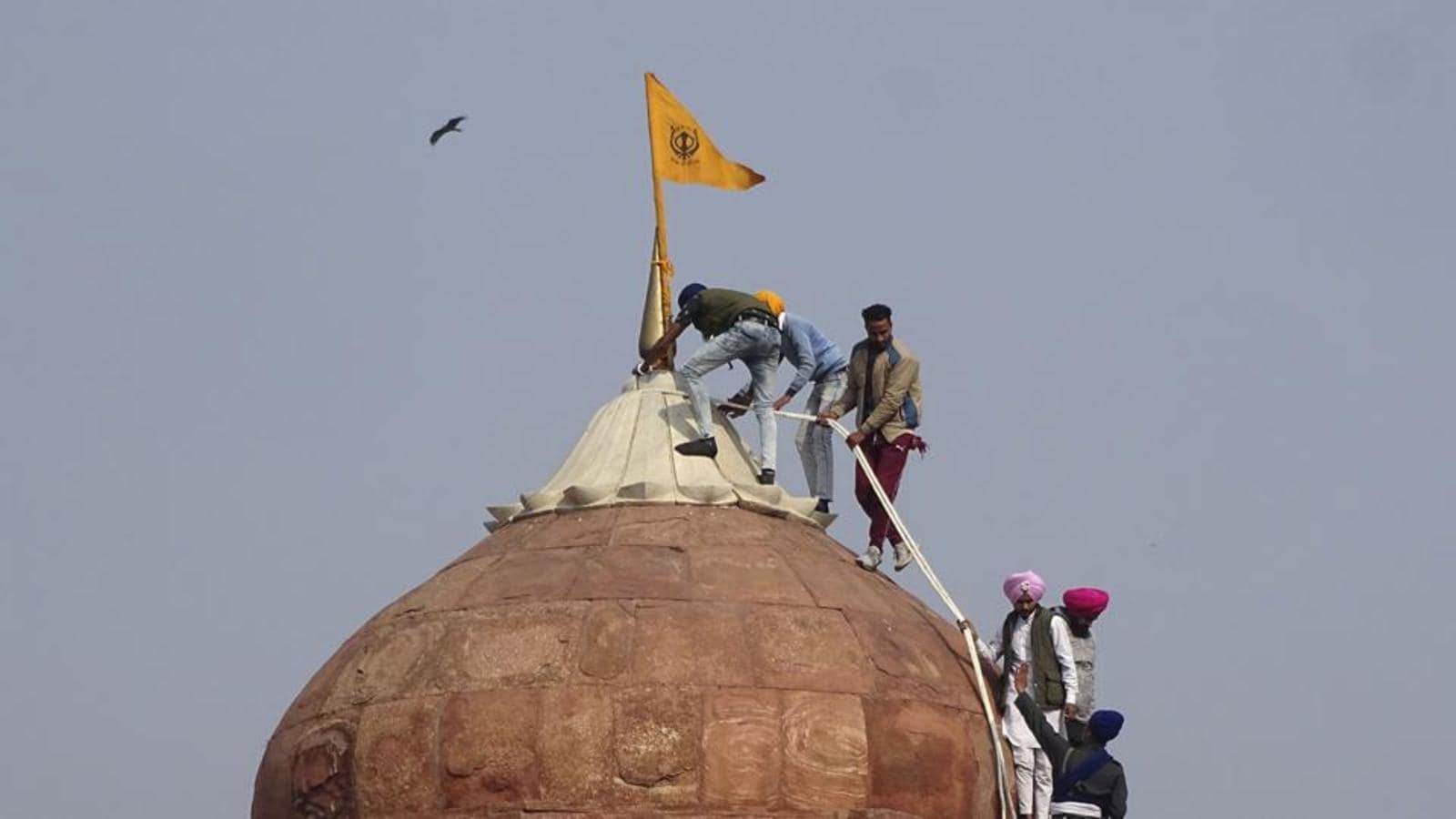 The Delhi borders of Singhu, Tikri and Ghazipur are now empty, the farmers that occupied them back home after twelve full months, even if the administration is yet to fully open them up to traffic. Over the past year, their success in making the Centre bow to their demand on the repeal of the three farm laws notwithstanding, this was also a year when the protesters faced action from the Delhi police. From alleging the involvement of Khalistani separatist groups and members of others banned organisation, to mentioning the names of environmental activists Greta Thunberg and Disha Ravi, the Delhi police filed cases against over two hundred protesters and arrested at least 143 people.

But there were two prominent faces of the protest, named in multiple police files, but could never be arrested. These two faces were splashed in newspapers, printed in wanted posters, shown on national television, even rewards were announced. But despite raids across different states such as Delhi, Punjab and Haryana, police was never able to arrest Jugraj Singh — the man who allegedly hoisted a religious flag at the Red Fort and Lakha Sidhana, a gangster turned activist, who according to the Delhi police, allegedly instigated the protesters to indulge in violence on Republic Day.

To be sure, the two men are no longer fugitives. The courts have granted them bail and both have vehemently denied the allegations against them.

But how did the two most wanted men evade arrest, and get better of the city police for months on end? HT spoke to several police officers, who were part of different search operations across states and put these details together.

A Delhi police crime branch officer said that immediately after the violence that broke out on Republic Day, “public sentiment” had turned against the farmers, and there was a focused push on finding Lakha Sidhana, but as it turns out, he may have been hiding in plain sight. “In the initial days of the Republic Day violence, public sentiment was against the farmer leaders after protesters rampaged the Red Fort. That was the best time for us to get Sidhana but he went incognito. We failed to find him. We later learnt that he came to the Singhu border and stayed with a close circle of supporters in those initial days. Singhu border was the safest place for him to hide,” the officer said.

By the third week of February though, the police had started getting inputs about Sidhana’s movements but there was a caveat with every tip-off. The man was always surrounded by his men, many with criminal antecedents. “Any operation to arrest Sidhana would not have been possible without a probable exchange of gunfire or violence. Our seniors did not want to take chances. If he was injured or shot dead in police gunfire, the farmers’ movement would have taken another turn, which the police’s top brass did not want,” another officer said.

Sidhana, 40, according to documents submitted by the Delhi Police in court, has at least 20 criminal cases against him including heinous crimes such as murder, attempt to murder, land grabbing and offences under the Arms Act. From Bathinda in Punjab, Sidhana had even contested the 2012 Punjab assembly election after getting a ticket from the now-defunct, People’s Party of Punjab.

A third police officer, said that, about a month after the Republic day violence, Sidhana, who was then carrying a reward of ₹1 lakh for his arrest, was spotted at a rally in Bathinda, Punjab. “But what could we do? We could have arrested him but the collateral damage in doing so may have been unimaginable. We saw a video of the rally(sometime in the last week of February) during which he gave a speech. It was attended by thousands of farmers. If 50% of the population wanted Sidhana arrested, the other 50% would not have let us arrest him. It had become a political case. It still is,” the officer said.

Sidhana in his statements to court and the police has vehemently denied allegations against him.

If Sidhana was the “recognisable face”, Jugraj Singh was a 21 year old with no criminal history or affiliations to any group. Until the afternoon of January 26, he was just one among the thousands of protesting farmers. Then suddenly, in one fell, dramatic, recorded and telecast on national television swoop, Singh was the man that had climbed one of the ramparts of the Red Fort and hoisted the yellow “Nishaan Sahib.”

In the immediate furious aftermath, the Delhi Police announced a ₹1 lakh reward on the information of Singh. But there was nobody that came forward. The police couldn’t find him either. On June 30, Singh was granted anticipatory bail.

“We never received any support from the locals in Tarn Taran, where he lived. When our teams first visited Tarn Taran, about 48 hours after Republic Day violence, the house was locked. The villagers had come out in support of what he did. Nobody was willing to share information. Even the local police in Punjab said they were helpless,” a Delhi police officer said.

Singh’s counsel in his anticipatory bail application before a city court wrote that his client had not indulged in rioting in the premises of the Red Fort. His counsel also reiterated that even if the police’s allegations against Singh were true, there was no national flag on the pole where the Nishan Sahib was hoisted. “So, no offence has been committed… It is not understandable as to how hoisting Nishan Sahib, has caused embarrassment and humiliation to the people of this country… Unfurling of religious flag on an empty flagpole is not an offence under any law,” reads the application.

In the days after the Republic Day violence, police teams visited Jalandhar, Bathinda, Tarn Taran Sahib and many other places searching for Singh but returned empty-handed. At every village, the teams were told at they had not seen Singh or even heard of him.

“The villagers spoke in one voice whenever our teams knocked at their doors. In hindsight, we can safely say that the movement was successful because of the massive support from such villages. Every village was advised to send at least 10 residents to Delhi borders for 7 days. Once one batch returned, the other 10 would take their place. Such was the support for the movement,” an officer said.

Drawing differences between Singh and singer turned activist Deep Sidhu, also accused of orchestrating violence and arrested within four days, another Delhi police officer said that the key to his arrest was the ire in some quarters against Sidhu. “We could arrest Sidhu within days as there were some people within the protesters, who were against him. There were therefore people who were ready to give us information on him. But in Jugraj Singh’s case, he was a farmer’s son, who worked as a volunteer at the local gurdwara. He had made no enemies. He was just one among the crowd in Singhu. We could not find moles within the protesters who were willing to rat him out. His one act had made him a hero,” the officer said. ​

All the people, at least 143, who were arrested by the Delhi Police for the Republic Day violence, are out on bail. Police have filed a charge sheet in only one case and the cases of rioting, obstructing public servants in discharging their duty, and violating prohibitory orders, registered in different police stations in Delhi are still pending investigation.

Last week, the ministry of home affairs(MHA) wrote to the Samyukt Kisan Morcha(SKM) — an umbrella body of 40 farmer union groups – assuring them that the cases against farmers would be withdrawn, a crucial cog in the ultimate decision of the farmers to return home. Thus far though, there has been no word from the Delhi police on how and when they will begin the process of withdrawing these cases.

Director Ashish R Shukla on mixed reactions to Undekhi 2, why...

All you need to know about protected cultivation, or vertical farming