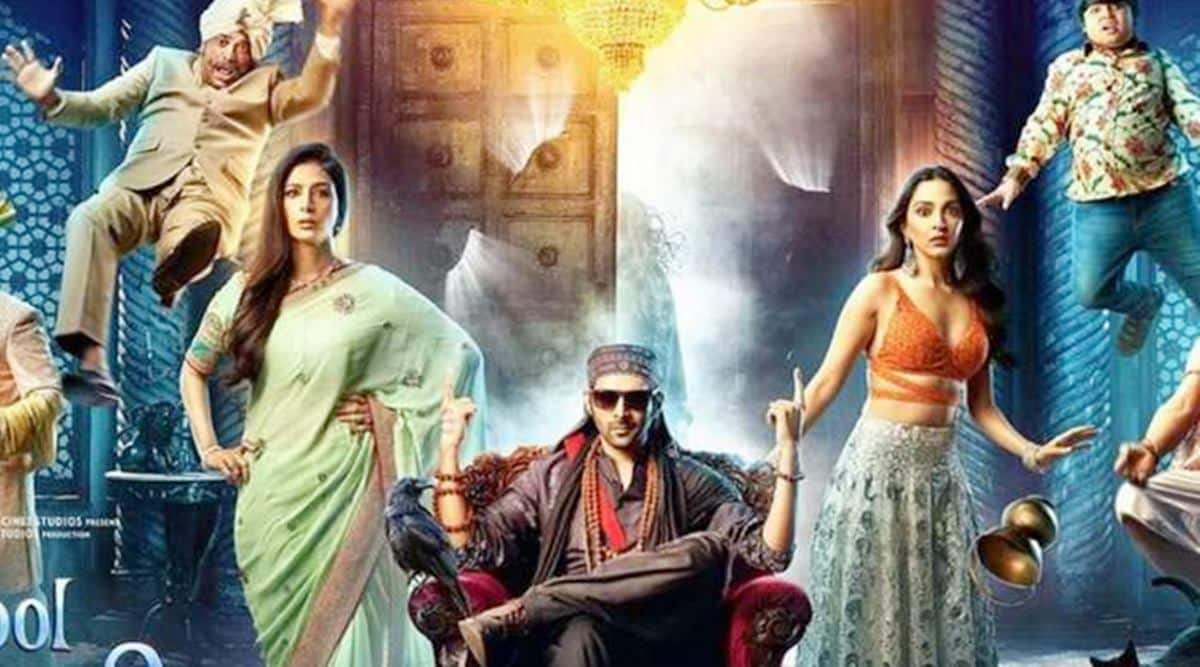 There is a maze in Bhool Bhulaiyya 2, and one that is never satisfactorily resolved. How are the many, many people who inhabit it, young and old, and those rendered of indeterminate age courtesy the get-ups, related to each other? Even Monjulika, the ghost, back after 15-reel years – who picks up right up from where she left off, skulking un-lost through a monstrous and dimly lit haveli — may struggle to sort that puzzle.

Not that director Anees Bazmee wants you to stress your mind too much. The patriarch, chacha, bhatija, bhabhi, behen, etc etc, are just really around to murder some spoken Rajasthani and an impressive amount of Bengali between them — when they are not being terrorised by Monjulika themselves that is.

Tabu is the pivot of the family, and an impressive pivot she makes, towering regally over others and sundry. Even a blood-curdling encounter with the ghost doesn’t stop her from appearing in yet another immaculate sari. The Rajasthan heat doesn’t seem to affect her many velvety choices.

Where do Kartik Aryan and Kiara Advani feature, you ask? Since you ask, well he a.k.a Roohan is the kind of son of a Delhi tycoon, educated in Doon School, who, sans a job, takes off to fly kites in Gujarat and eat paan in Benaras as the fancy takes him. Such gallivanting one day brings him to her, a.k.a Reet. She is the kind of rich girl who rebels against her traditional family to study medicine, and then never gives her “four years of hard work” any more thought.

Roohan and Reet meet at some snow-clad tourist place, and after a brief detour to a music festival populated almost exclusively by white men and women, are such good friends that when she decides to play dead — so that the man selected for her as her fiancé would marry her sister instead. He plays along. Roohan, in fact, doesn’t just land up at Reet’s large, Monjulika-haunted haveli, with her in tow in secret as she is officially “dead”, but also takes on not just Monjulika but the souls of all dead villagers. The reason being that the villagers fall unquestioningly for his lie that he is a medium with extraordinary sensory powers.

Don’t go expecting any light touches, or any hummable music like Part I. Apart from Monjulika’s white-faced, long-tressed, black-dressed look, there are repeated jokes at the expense of an overweight child and a hard-of-hearing pandit, casual disrespect towards an old woman who has just died, gross misuse of a donkey, and Roohan’s borderline sexism towards the other gender.

The comic parts offer only temporary relief, particularly as the butt of jokes are almost always the same unfortunate four, who appear to be there for solely that purpose. And these are only funny because some very good actors are playing some of their worst roles here.

Not Kartik Aryaan though, who appears to have just walked from the set of one of his previous films, the hair never combed, the cockiness never reined in. Still his wordy, bouncy Roohan, unflagging in enthusiasm, lends some much-needed energy to the film. Kiara Advani, on the other hand, has little to do except pop up now and then.

The biggest laughs come from the kind of slight swipes that you wouldn’t expect in a Bazmee film. A pandit calling out for customers pleading “achche din aane wale hain”; and later, while running up and down the haveli in one of those headless-chicken searches, throwing in: “Hum leke rahenge”. He stops, right there, but everyone gets the joke. If only the film got it: less is more.

Suriya watched Etharkkum Thunindhavan with his kids: ‘Glad my son and...

UP govt extends closure of schools till Jan 30

Asha Parekh looks ethereal in black as she graces a magazine...