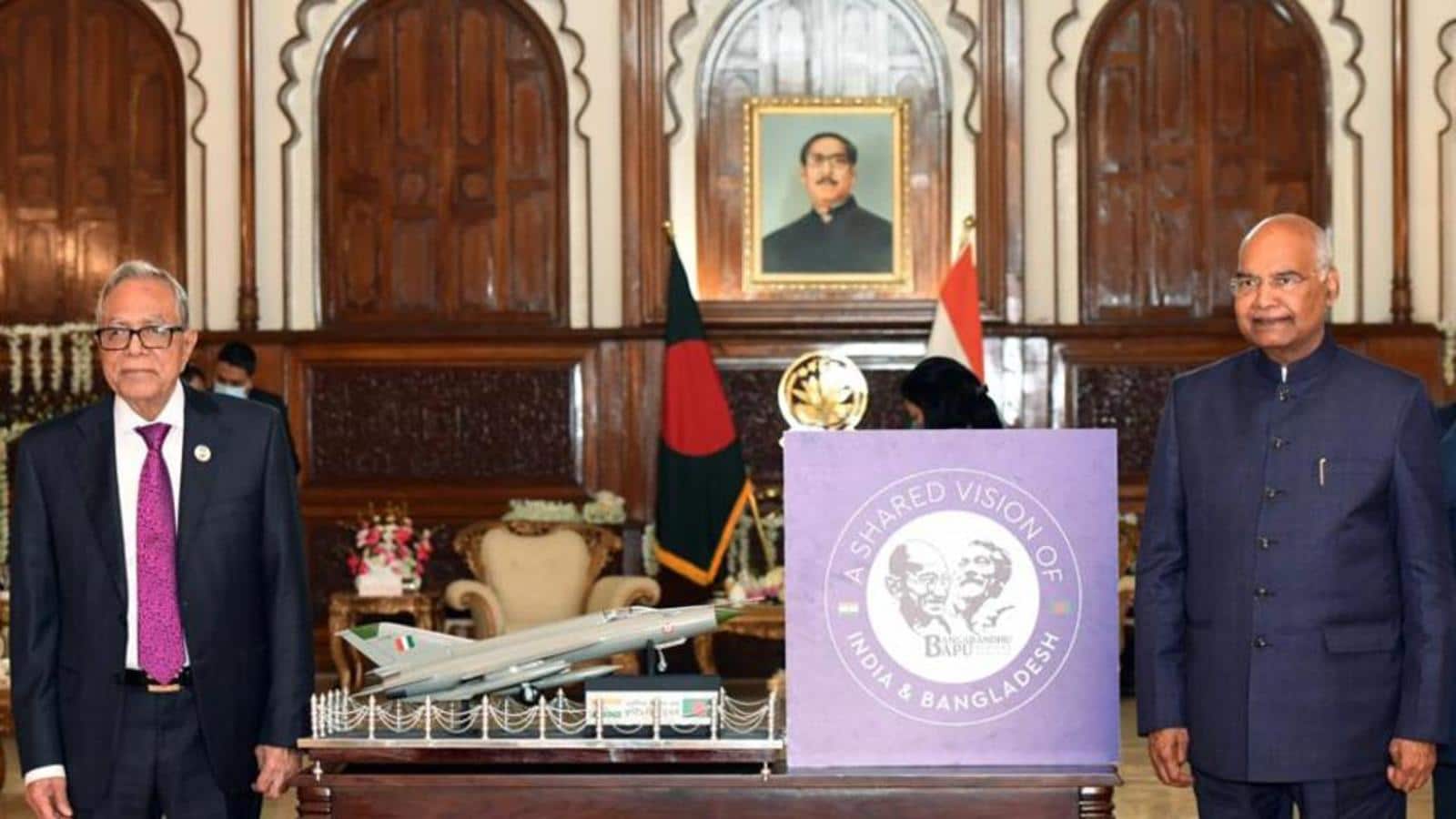 Measures to bolster cooperation in areas ranging from green technology to connectivity, enhanced border management and the status of Bangladesh’s Hindu minority figured in President Ram Nath Kovind’s discussions with the Bangladeshi leadership on Wednesday.

Kovind is on a three-day visit to Bangladesh at the invitation of his counterpart Abdul Hamid to represent India at celebrations marking the neighbouring country’s 50th Victory Day on Thursday. This is also his first foreign visit since the start of the Covid-19 pandemic. Kovind met Hamid, Prime Minister Sheikh Hasina and foreign minister AK Abdul Momen hours after arriving in Dhaka.

The two countries have achieved an “incredible amount of synergies” in areas such as connectivity and joint manufacturing and their close cooperation has helped resolve “intractable issues in the most amicable manner”, foreign secretary Harsh Shringla told a media briefing in Dhaka while talking about the president’s interactions with the Bangladeshi leadership.

India and Bangladesh are now looking at ways to step up cooperation in new areas such as green technologies, renewables, and IT and digital platforms that can enhance employment for the youth, he said. “We are two countries that mutually reinforce each other…and that message was there,” he added.

Responding to a question on whether the status of Bangladesh’s Hindu community and security concerns related to the border had figured in the meetings, Shringla indicated that both issues had been discussed.

Without directly referring to the Hindu minority, Shringla said he couldn’t go into details because of the confidentiality attached to the meetings. “Obviously, those discussions did include issues that are important to both countries and it included questions that are topical for both countries. Needless to say, we are on the same page on most of these issues.

“We do appreciate that certain issues are internal matters for Bangladesh but they are important for both countries, the handling of these issues has been, in many senses, very satisfactory. We do believe that whatever actions are being taken are those in the best interests of…both our countries,” he added.

In October, India had expressed concern after Durga Puja pandals and temples at several places in Bangladesh were vandalised by mobs following posts on social media about the alleged desecration of the Quran at a pandal. Bangladeshi authorities acted swiftly by cracking down on those responsible for the violence.

Shringla said the two sides had discussed the border issue briefly and more talks would be held when the head of India’s Border Security Force visits Dhaka on December 19. Both sides will work out the “best measures” to tackle any existing issues, he added.

Bangladesh has expressed concern at the killing of some of its citizens in incidents of firing by Indian border guards, and the issue has figured in several meetings between the two sides in recent years.

Shringla said economic cooperation had grown even amid the Covid-19 pandemic, with two-way trade increasing by 14% increase even as Bangladesh’s exports crossed the $1-billion mark. The two sides are discussing a comprehensive economic partnership agreement (CEPA), which needs to be finalised as quickly as possible to continue preferential access for goods he said.

The protocol for duty-free access for Bangladeshi products under the South Asian Free Trade Area (SAFTA) regime will no longer be in place after the country’s graduating from least developed country (LDC) status and there is a need for an alternative framework under a CEPA, he said.

One-third of India’s total lines of credit has gone to Bangladesh, which has received some $10 billion under highly concessional terms, and the two sides are working on another package of assistance. The Indo-Bangladesh Friendship Pipeline, which will transport high-speed diesel from the Numaligarh refinery in Assam to Parbatipur in Bangladesh, is progressing well will be inaugurated next year.

India’s new cross-border power trade policy allows the country to be used as a transit point for the exchange of power between its neighbours, and there are no regulatory issues that will come in the way of Bangladesh’s efforts to purchase power from Nepal or Bhutan, Shringla said.

Several defence items have also been identified and are being fast-tracked under a $500-million line of credit extended to Bangladesh in the defence sector. “We will see the exports of certain defence items from India coming to Bangladesh,” Shringla said, adding India is keen on enhancing cooperation in areas such as training, military exchanges and joint manufacturing in defence.

Ukraine crisis: Embassy in Romania asks Indians to not pay for...