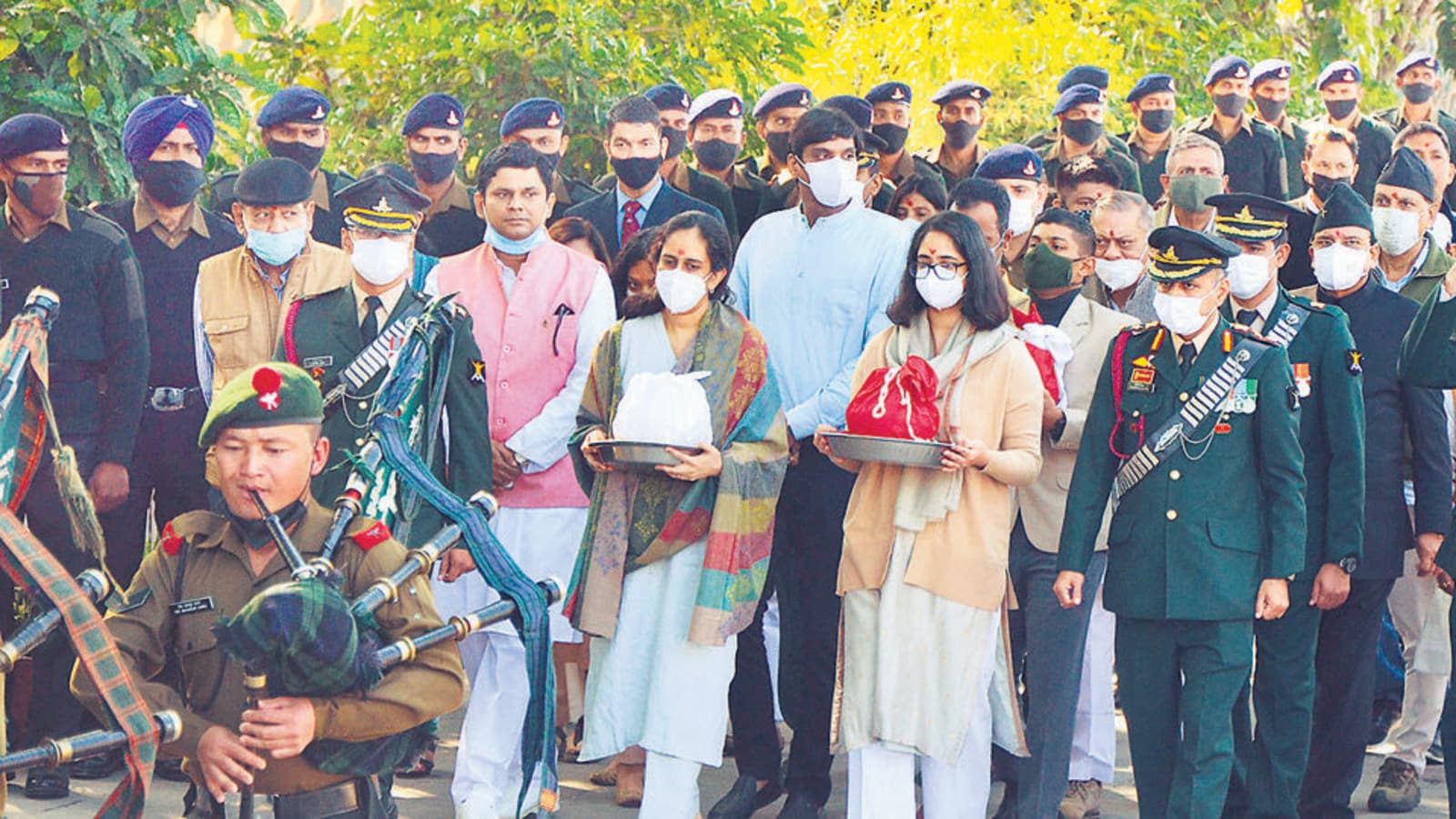 NEW DELHI: The bodies of 10 more soldiers, among the 13 people killed in the December 8 Coonoor helicopter crash, were identified on Saturday, officials familiar with the development said.

While mortal remains of six of them, identified by Saturday morning, were flown to their hometowns in special flights; the bodies of the remaining four, identified later in the day through DNA testing, will be handed over to their families on Sunday, the officials said.

The bodies that were identified later in the day were those of Lieutenant Colonel Harjinder Singh, Havildar Satpal Rai, Naik Gursewak Singh and Naik Jitendra Kumar. While Lieutenant Colonel Singh’s funeral is likely to be conducted at Brar Square in Delhi Cantonment on Sunday, the remains of the other three soldiers will be flown to their hometowns.

Rawat, his wife and Lidder were on Friday cremated with military honours at Brar Square in two separate solemn ceremonies steeped in military tradition, with top government officials attending the heart-wrenching final send-off and thousands of men, women and children lining the road leading to the crematorium to pay their last respects.

While Kritika and Tarini lit the funeral pyre of their parents, Bipin and Madhulika, 16-year-old Aashna performed the last rites of her father Lakhbinder Singh Lidder in ceremonies filled with emotion, honour and pride. In a picture of courage and dignity, Lidder’s wife Geetika was seen comforting Kritika and Tarini at the funeral, even though her own husband was cremated at Brar Square a few hours earlier and his pyre was still burning.

The sole survivor of the crash, Group Captain Varun Singh, is still on life support at the IAF Command Hospital in Bengaluru. Defence minister Rajnath Singh is monitoring the group captain’s condition, and is in touch with his family. The minister spoke to Varun’s father, Colonel KP Singh, on Saturday, officials said.

Air Marshal Manavendra Singh, who is the Air Officer Commanding-in-Chief of the IAF’s Bengaluru-based Training Command, is heading the inquiry into the crash.

A helicopter pilot, Manavendra Singh has logged close to 7,000 flying hours in his 39-year career and operated in challenging sectors such as Siachen, the North-east, Uttarakhand, the western sector and the Democratic Republic of Congo.

Rawat was on a visit to the prestigious Defence Services Staff College (DSSC) at Wellington in Tamil Nadu to address the faculty and student officers there.

The Mi-17V5 helicopter took off from the Sulur air base at 11.48 am on Wednesday, and it was scheduled to land at the helipad at the Wellington golf club at 12.15 pm. The air traffic control at Sulur, however, lost contact with the helicopter at 12.08 pm, 20 minutes after it took off. The chopper was seven minutes away from its destination.

The Coonoor crash was of one of the worst air accidents involving India’s top military brass and a setback to the ongoing military reforms in the country, the biggest since Independence. Rawat was spearheading the military’s theaterisation drive to enhance the effectiveness of the armed forces and reshape the conduct of future operations.

The CDS’s shocking demise will have implications for the military reforms, including theaterisation, and the government will have to move swiftly to announce a succession plan. Army chief General Manoj Mukund Naravane is the senior-most military officer in the country after the CDS’s demise. Rawat survived a Cheetah crash in Dimapur on February 3, 2015. He was a lieutenant general at that time.

Over 75 per cent US retailers ready to accept crypto and...

Serum institute seeks government nod to export Covovax to the US

Yogi’s message on UP ahead of PM Modi visit linked to...

At least 3 killed, over 40 injured in IOC’s Haldia refinery...