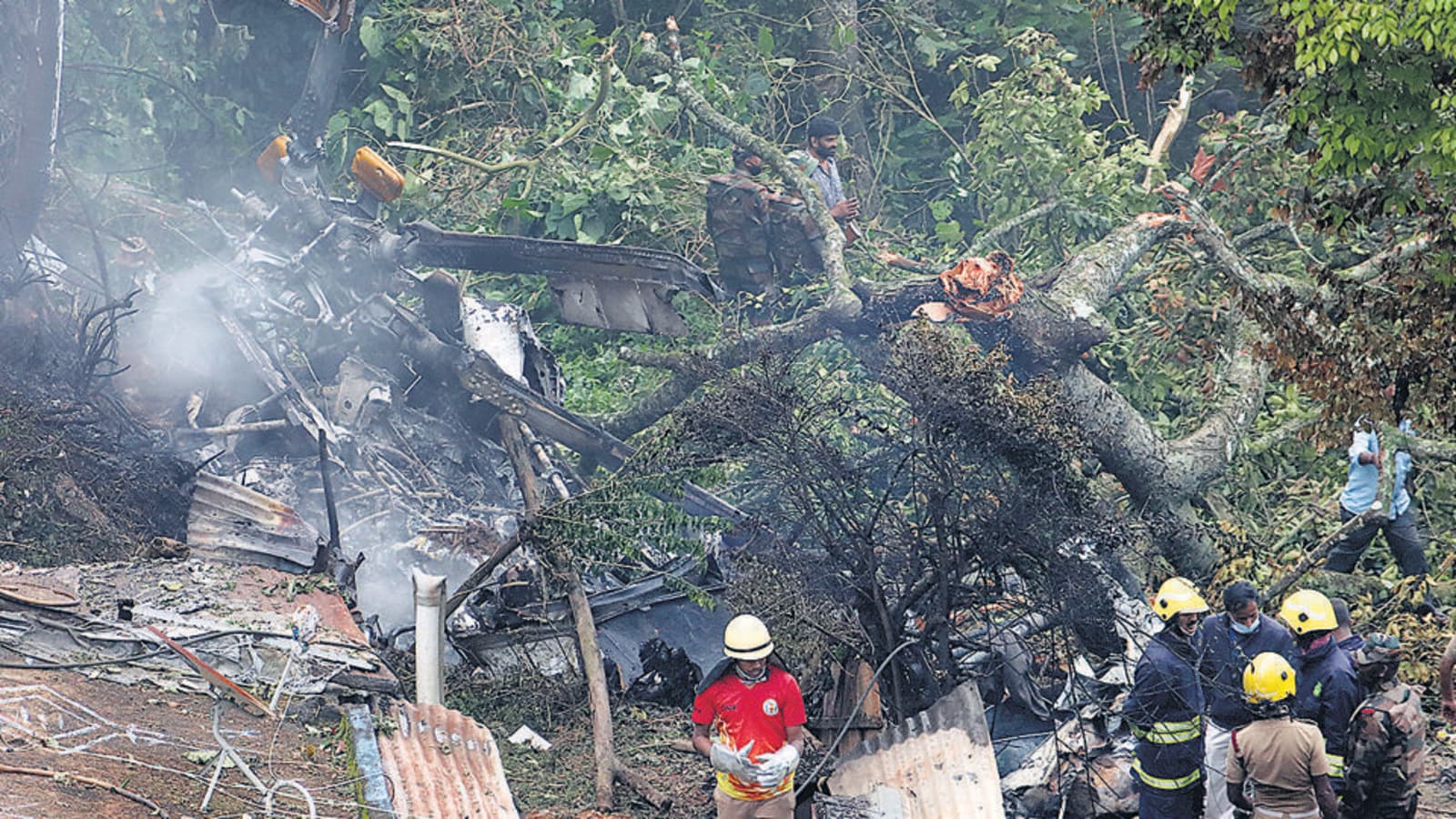 The Indian Air Force Mi-17V5 helicopter that crashed near Coonoor on Wednesday took from the Sulur air base at 11.48am with 14 people on board including chief of defence staff General Bipin Rawat and his wife Madhulika Raje Singh Rawat, and it was scheduled to land at the helipad at the Wellington golf course at 12.15pm where a three-star general was waiting to receive them, officials familiar with the matter said on Thursday.

The air traffic control at Sulur, however, lost contact with the helicopter at 12.08pm, 20 minutes after it took off, defence minister Rajnath Singh told Parliament in a statement on one of India’s worst air mishaps that took the life of the country’s most senior military commander. The helicopter was seven minutes away from its destination.

Rawat was on a visit to the prestigious Defence Services Staff College (DSSC) at Wellington to address the faculty and student officers undergoing a one-year course there. The staff course at the tri-services institution is known to further career progression of young officers from the army, air force, and navy.

DSSC commandant Lieutenant General Manmohan Jeet Singh Kahlon, who was commissioned in the armoured corps and has also flown army helicopters, and his staff were waiting at the helipad to receive Rawat.

There were tense moments at the Wellington helipad when the Russian-origin Mi-17V5 helicopter, a reliable flying machine, did not land at its scheduled time or even minutes later, the officials said.

At this point, it is not clear what went wrong with the helicopter in the final moments of the crash though the area where it went down did not have good visibility. A short video clip, shot by tourists in the area, captured the last moments. The video showed the low-flying helicopter penetrate dense mist over a hill. It did not capture the crash but the audio recorded a loud bang.

A three-star IAF officer is heading the inquiry into the crash.

Search crews on Thursday recovered the helicopter’s black box that could give vital clues about what went wrong. The black box, which consists of the flight data recorder (FDR) and the cockpit voice recorder (CVR), is a crash survivable unit.

While the FDR records vital information including altitude, speed, vertical acceleration and other technical data including instrument readings, the CVR contains crew communications.

The focus of the team investigating the crash will be on decrypting the black box data, a laborious exercise that could take days, the officials said.

Accessing the data held in the black box will depend on its condition, said Air Chief Marshal Fali Major (retd), a former IAF chief and helicopter pilot.

“If the black box is not damaged, decrypting it may not take much time. It could be done in a few days. But if it was damaged in the crash, the IAF may have to send it to Russia to decrypt the data and piece together what happened. It will give vital information on all technical parameters,” Major said.

IAF had to send the damaged black box of a C-130J special operations aircraft that crashed near Gwalior in March 2014 to the US as it did not have the means to retrieve the data within the country. A C-130J flew the mortal remains of the crash victims from Sulur to Palam on Thursday evening.

Major cautioned against speculating on the reasons behind the helicopter crash, and said it was best to wait for the investigators to come out with their findings.

The chopper was flown by Wing Commander PS Chauhan, the commanding officer of Sulur-based 109 Helicopter Unit, and his co-pilot Squadron Leader Kuldeep Singh. Chauhan was commissioned in June 2002, while Singh joined service in June 2015. The other two IAF personnel on board were junior warrant officers Rana Pratap Das and A Pradeep, who had joined the air force in June 2006 and January 2004 respectively.

20 Mohali students have returned, wait on for 45 others