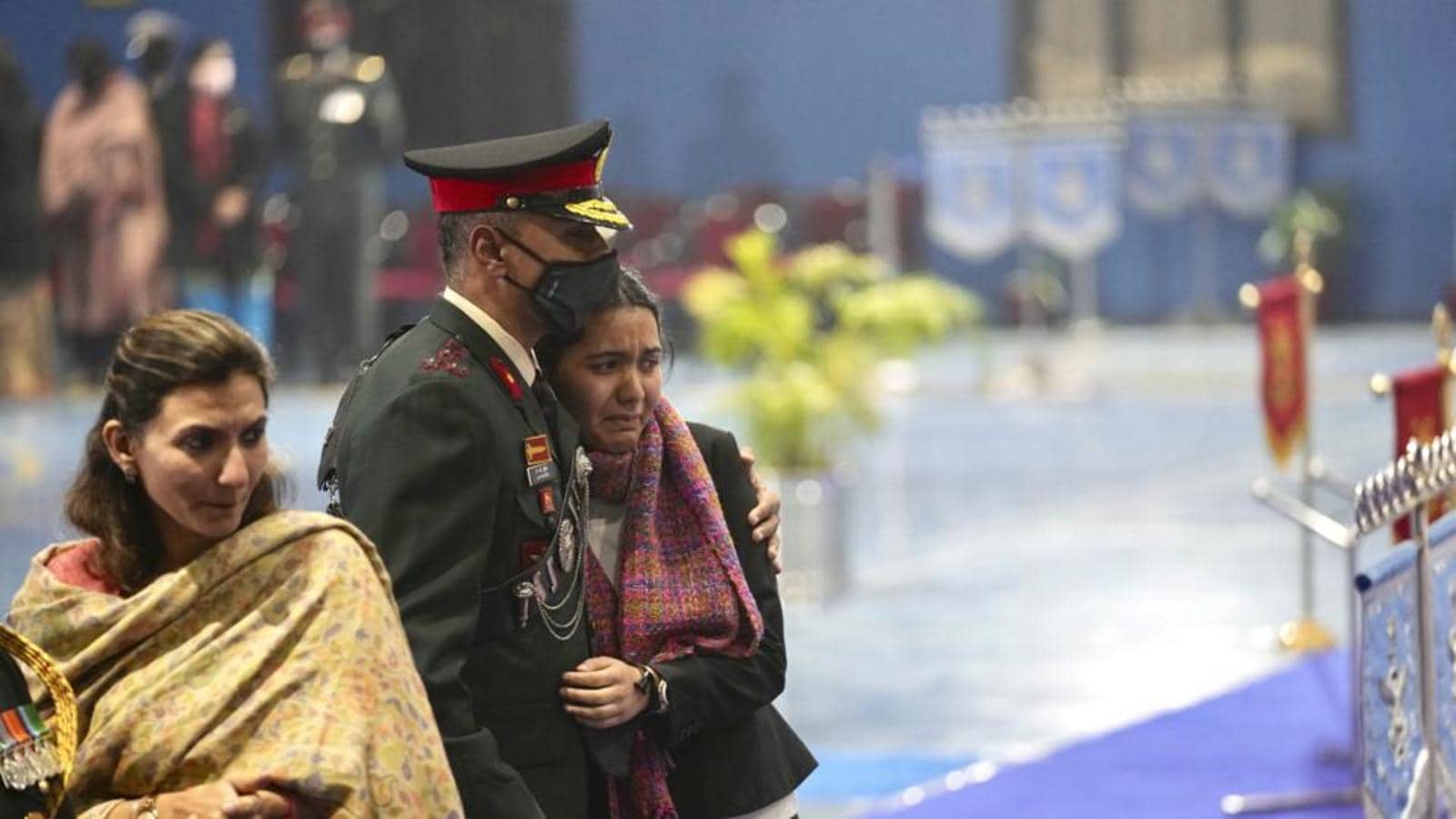 At 8:45am on Wednesday, 27-year-old Lance Naik Boggala Sai Teja was on a video call with his wife Shyamala, in the village of Madanapelle in Andhra Pradesh’s Chitoor. It was a routine phone call — almost every morning, Teja would speak to his wife and spend time virtually with their two children, Mokshagna (5) and Dakshini (2). But, on Wednesday, within hours of their conversation, Madanpelle village was in mourning, with Teja one of the 13 people killed in the helicopter crash in Coonoor in Tamil Nadu that also took the lives of Chief of Defence Staff General Bipin Rawat and his wife Madhulika.

The grief were not limited to Madanpelle — from Agra in Uttar Pradesh to Thrissur in Tamil Nadu to Takdah in the Darjeeling hills, communities came together in mourning, remembering their favourite sons.

The call on Wednesday morning was a short one, Teja’s uncle B Sudarshan told HT. “He told his wife that he wanted to see his daughter, but went off very quickly because he had to accompany his boss to Tamil Nadu. He was appointed as the General’s personal security officer only seven months ago. Even his younger brother is a soldier posted in Sikkim,” Sudarshan said.

In Thrissur, the family of 37-year-old Junior Warrant Officer A Pradeep Kumar still hasn’t mustered up the courage to convey to his ailing father, AV Radhakrishnan, on a ventilator for the past five days, that their son is no more. “He called up his mother on Wednesday morning, saying he was on an important trip accompanying the CDS and promised her he will be there in the weekend to look after his father,” said his brother A Prasad, now camping in Coimbatore. Prasad recounted that Kumar was part of several rescue operations, including the Uttarakhand floods of 2013 and the Kerala floods in 2018. That year, the IAF rescue team he was part of received a commendation from the President for their work.

In the coal town of Talcher in Odisha, the family of 35-year-old junior warrant officer Rana Pratap Das was waiting for him to come home early next year. “He sounded upbeat and asked me what my plans for January next year were when he would be home. Till Wednesday evening we did not know that he was in the ill-fated Mi17-V5 chopper that crashed till we got information from IAF. For several hours I could not even venture to tell his parents about the death of their only son,” said his brother-in-law Sankalp Das.

In Darjeeling’s Takdah, the family of 40-year-old havildar Satpal Rai, another personal security officer, was waiting not just for him to come home, but to retire.

“Satpal wanted to take early retirement but General Rawat did not let him leave, saying they would retire together in 2024,” said Mandira Rai, the soldier’s wife.

When Rai, whose father similarly served in the Indian Army and one of whose brothers is also serving the forces, spoke to his wife on Wednesday morning, they talked about him staying home and starting a business. “He said he would call me again after reaching Wellington. It was Diwali when I saw him last. When he came home he said he would retire and start a business. I have lost my husband but I am proud. He died for the country,” Mandira Rai said.

Surendra Singh Chauhan, 74, is still unable to comprehend the tragedy that has taken from him his son, 42-year-old Wing Commander Prithvi Singh Chauhan, who was flying the ill-fated helicopter. Sitting in one corner of his Agra home, Chauhan said that the first time they found out about the tragedy was from television at about 6.30pm on Wednesday. “We could not get any official confirmation about the death from the Indian Air Force on Wednesday. My son-in-law in Mumbai left for Coimbatore where my son was posted,” he said.

Chauhan said that his son was soft spoken, and close to the entire family. He spent several years away from home, studying first in Gwalior, then Sainik School in Rewa, and then joining NDA. “He last came home on Raksha Bandhan this year after 31 years. It was the last time that his three sisters tied a Rakhi to him. We are all shattered,” Chauhan said.