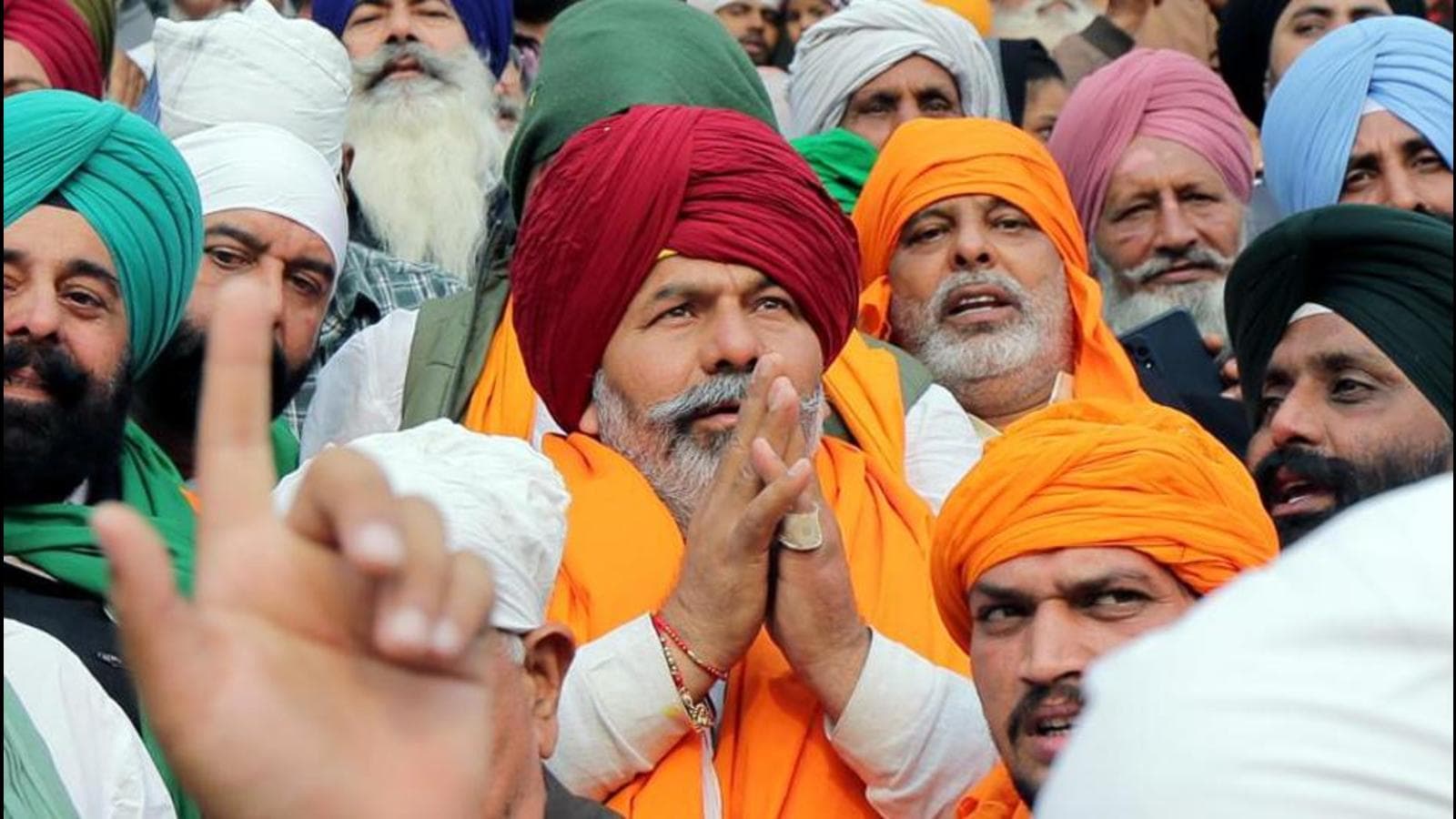 On December 11, protesting farmers started returning home from the Delhi borders — Singhu, Gazipur and Tikri — after a successful agitation against the three farm laws for 382 days. It was a year of grit and determination. These farmers, mostly from Punjab, Haryana and western Uttar Pradesh, showed to the country and the world that peaceful movements can win, provided the objectives are clear and there are no political overtones. But ironically, the end of the farm agitation does not mean the lack of political implications in Punjab, Uttar Pradesh and Uttarakhand, where assembly polls are scheduled for early next year. If anything, across these states, and across incumbent governments, there will be political repercussions, irrespective of the party in power.

With the farm agitation pitching itself against laws passed by the Centre, led by the BJP government, the party will obviously have to bear the brunt in Uttar Pradesh and Uttarakhand if it fails to undo the narrative that it is “anti farmer.” With three months to go, the farmer protest is still a popular narrative in the three states, particularly in regions that have a high Sikh or Jat population. What this means is that political parties in the poll bound states are now eyeing the support of farmer leaders to ride their newly gained acceptability and popularity. Already, this much is clear in at least Uttar Pradesh and Punjab.

In western Uttar Pradesh, Bharatiya Kisan Union leader, Rakesh Tikait, has grown into a prominent Jat leader, able to garner the support of lakhs of farmers during various mahapanchayats organised during the agitation. Although Tikait himself is unlikely to contest, there is a strong buzz that someone from his family may be given a ticket by the Rashtriya Lok Dal (RLD). The Jayant Chaudhary led party is contesting the polls in an alliance with Akhilesh Yadav’s Samajwadi Party. There is precedent too. Tikait had unsuccessfully contested the 2014 Lok Sabha polls on an RLD ticket at a time when there was a strong BJP wave led by their prime ministerial face Narendra Modi. Before that, in 2007 he had fought the 2007 polls as an independent with support from the Congress and lost. Crucially though, there was no farmer movement on both these occasions to aid his campaign.

The situation on the ground in Western Uttar Pradesh has changed politically in the past year, and this has turned Tikait, the Delhi police constable turned farmer leader, an electoral game changer. The night Tikait famously cried at the Ghazipur border refusing to vacate the protest site, he got a call from RLD supremo Ajit Singh pledging all support and the next day thousands of farmers from western UP joined him at the protest. However, political observers in western UP say the new found friendship between Tikait and RLD can electorally help the latter only if the former campaigns for the party. They caution that Tikait’s influence outside the Balyan khap, which is headed by his elder brother Naresh, may yet be limited. “This election will tell us whether he (Rakesh) has become (politically) as tall as his father (Mahender Singh Tikait) or not,” said an analyst.

However, the farmer agitation may well act as glue against the incumbent government in western Uttar Pradesh, where sugarcane is the main cash crop and the feeling exists that the Yogi Adityanath led BJP government has not done much for those that grow it. The BJP government has increased the state advised price (SAP) for cane procurement by sugarcane companies just by ₹10 per quintal since it came to power in March 2017. In addition, the companies owe farmers ₹12,000 crore against cane purchase, although clearing arrears has started in the last month

What has also hurt farmers in western UP is the close to doubling of electricity charges for irrigation and domestic connections in the past four and a half years, rising diesel prices and stringent anti-cattle slaughter regulations that have increased a stray cattle menace in farms. Some political observers say there is now a farm leader in Rakesh Tikait that could have done damage to the BJP in western UP, and this was one of the reasons that the Centre eventually did repeal the three laws.

Contrary to the popular perception that farmer unions will back the incumbent Congress in Punjab in gratitude for their support, the reality on the ground may well be more complicated. The farmer unions have signaled that they may even take the incumbent Congress government to task for failing to “fully implement” its poll promises on agricultural issues, especially a complete debt waiver. On December 17, the Punjab based farmer unions are set to meet state Chief Minister Charanjit Singh Channi and other Congress leaders to seek answers on a promise made in 2017.

Till June 2021, the Punjab government has waived loans worth ₹4,736 crore for 5.8 lakh farmers, benefitting less than one-third of total 1.8 million registered in a state considered the food bowl of India. Experts also say exposure to institutional credit among agriculturalists in the state who have less than five acres of land remains limited, and thus most small and marginal farmers have not benefitted from the farm loan waiver scheme launched in January 2018. The latest data from Punjab shows that farm debt has increased to ₹77,000 crore in June 2021 as compared to 74,878 crore in January 2018. Although CM Channi announced an additional loan waiver of ₹520 crore for farm labourers, this may not be enough to cut ice. In the meeting, farmer leaders are likely to seek a complete loan waiver for all farmers before the elections, a demand not easy to meet considering the states poor financial condition.

On top of this, there is a strong murmur in Punjab that the Aam Aadmi Party, the principal opposition in the state is trying to woo a ‘prominent’ farmer union leader, who was one of the faces of the protests at Singhu border, and have offered to make him the party’s chief ministerial face for the state elections. According to AAP insiders, the farmer leader has so far not agreed to the offer but claimed that he has not out-rightly rejected the outreach either. Delhi chief minister and AAP convenor Arvind Kejriwal had repeatedly assured voters in Punjab that the party’s CM candidate will be a Punjabi. The party believes that contesting the polls without a face could hamper its chances of winning and if AAP manages to bring the prominent farm leader into its fold, the contest may well be a cliffhanger.

The Samyukta Kisan Morcha (SKM), an umbrella body of 40 farmer unions, realise that some of its leaders have electoral ambitions and the success of their agitation has given wings to this ambition. It is in this realization that SKM core committee member Darshan Pal said on December 9 said those leaders planning to join political parties should leave the unions. On the day they decided to suspend their year-long agitation, he reiterated that the farmers’ body should remain “apolitical”. Pal added that the SKM has called a meeting on January 15 to discuss how the SKM must present itself as a national level morcha and to review talks with the Centre on the Minimum Support Price (MSP) law. The Centre has agreed to appoint five SKM leaders as members of the committee to discuss the long standing MSP demand.

The date, January 15, is significant. The meeting is set for a time when the election campaigns in the farm rich states of UP, Punjab and Uttarakhand will likely be in full swing, and will provide the unions a chance to up the ante against the Centre if there has been no progress on the MSP law by then.

The farmer leaders want the introduction of the MSP law to arrive in the budget session of Parliament that begins from February 1 and will build pressure on the Union government for this. A final call on the demand to introduce the MSP bill in the budget session will be taken at the January 15 meeting. That could be tricky for the government, whose agricultural economists are against such a law guaranteeing MSP arguing that it would bring adverse fiscal implications, with state elections around the corner.

Opinion polls notwithstanding, the agitation and the death of close to 700 farmers during the protest will be a core election issue, even as the BJP tries to veer the narrative away from it. Most BJP leaders have begun to say that the agitation has now ended as a poll issue with the governments repeal of the laws and that Prime Minister has apoligised for the pain farmers suffered. It is clear that the saffron party wants to contest the elections based on the popularity of Prime Minister Narendra Modi and the work done by its incumbent governments, along with the added dose of Hindutva politics. In Punjab, it is likely to target the Gandhi family for hurting the pride of former army man Captain Amarinder Singh, sacked by the Congress as chief minister in September this year. Only counting day will reveal if the farming community have accepted PM Modi’s apology and forgiven the BJP, or whether there is a political price to pay for the last year.

BJP, Congress in war of words over Belagavi unrest

Vaishno Devi stampede: What we know so far