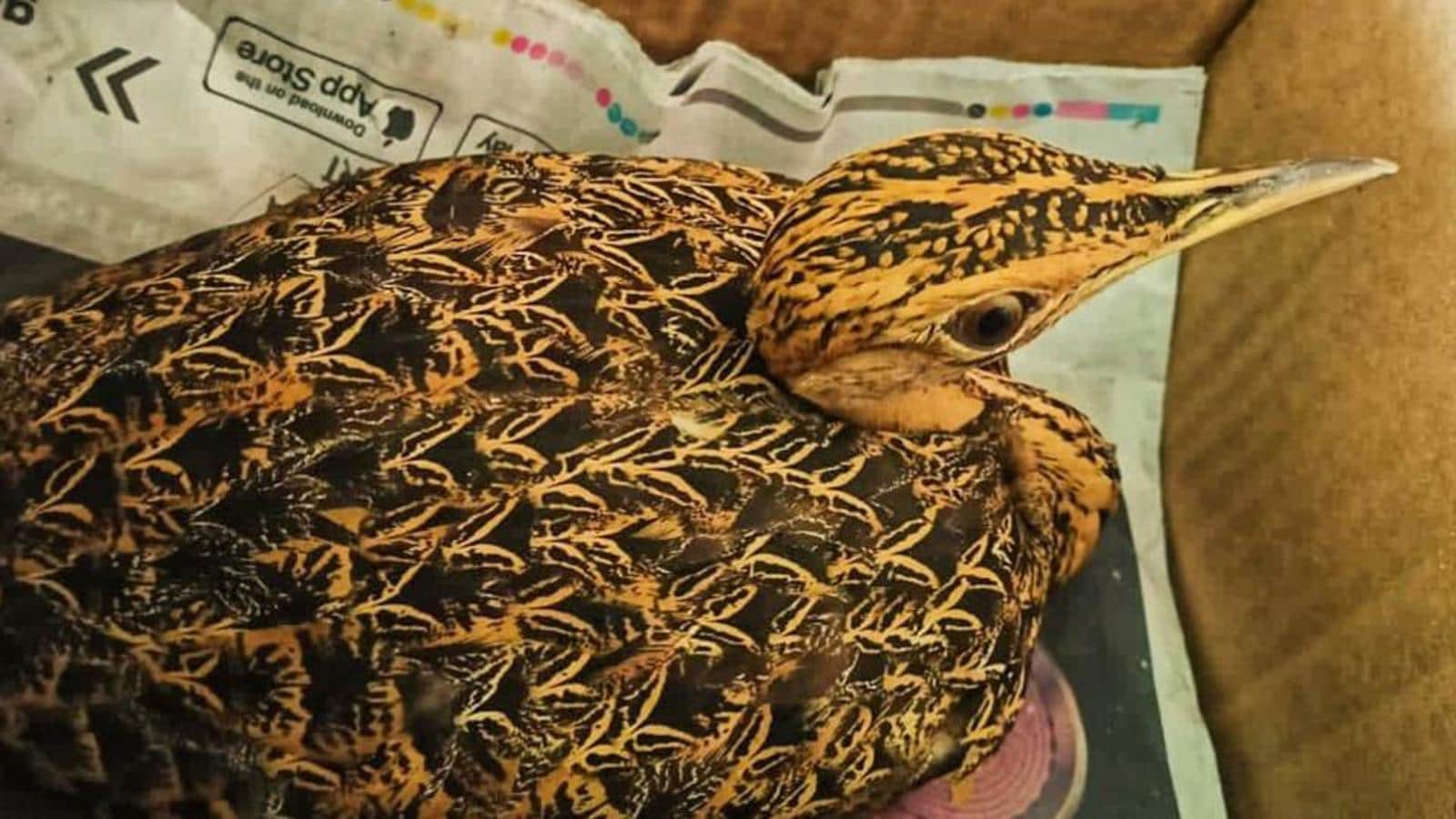 A female lesser florican – an endangered species of bustard endemic to India of which less than 270 are estimated to be alive in the wild – was rescued by the forest department in Solapur, Maharashtra earlier this week.

The bird was tagged with a metal ring bearing a unique ID number and released at Solapur’s Great Indian Bustard Bird Sanctuary, where, officials said, it will have a higher chance of survival.

The sighting of the bird was reported on Tuesday by Hiremath, a resident of Nannaj in Solapur North, who noticed it taking shelter near his home seemingly to escape stray dogs.

Hiremath informed the nearby sanctuary and the forest department’s office in Nannaj.

A team from Solapur’s forest department and the NGO Wildlife Conservation Association (WCA) moved the female bird to the district veterinary hospital as it had a minor injury on a wing.

After examining the bird and administering first aid, the district veterinarian’s office issued a certificate stating that it was fit to be released back into the wild.

It was released at the bird sanctuary the same afternoon in the presence of deputy forest conservator Dhairyashil Patil, range officer Shubhangi Jawale and WCA members.

A female bird of the same species was last seen in Maharashtra in August this year, when it was photographed at the Tadoba Andhari Tiger Reserve.

The bird is locally known as “tanmor” or “kharmor”, a forest department official said. “Four years ago, a lesser florican was also seen near the district police headquarters in Solapur. They are an endangered species. This sighting is important because it tells us they are still present in the area,” said the official, who requested not to be named.

The lesser florican is one of three bustard species endemic to the country, the others being the Bengal florican and the Great Indian Bustard. A report by the Wildlife Institute of India in 2018 had estimated their population in the wild to be not more than 264, indicating a decline of about 80% over the last two decades.

The species is classified as “endangered” by the International Union for Conservation of Nature (IUCN) and it also features in Appendix II of the Convention on International Trade in Endangered Species (CITES), which “includes species not necessarily threatened with extinction, but in which trade must be controlled in order to avoid utilisation incompatible with their survival.”

It is also protected under Schedule I of the Indian Wildlife Act.

Kedar Gore, a wildlife biologist and director of the Corbett Foundation and member of three separate IUCN commissions, said the main reason behind the rapid decline in lesser florican numbers is the disappearance of grasslands and associated ecosystems.

“Forests in India are better protected, but grasslands are not seen as having any ecological value. After hunting first drove down the numbers of these birds, their habitat has been under threat in Maharashtra mainly due to expansion of industries in grassland areas,” Gore said.

“In Rajasthan and Madhya Pradesh, renewable energy projects have been established on grasslands where these birds mate. The Corbett Foundation, Bombay Natural History Society, state governments and various experts have been actively working on conservation measures, but there needs to be a wide-ranging policy to arrest the sort of land-use change that is destroying lesser floricans’ habitat,” Gore said.

We may make mistakes, but our intent is never wrong, says...

Congress hit out at government for duping farmers

Chandigarh councillors to visit Goa next to study waste management

SKM to decide on Jan 15 if farm unions contesting polls...

Bullet train project chief outlined 16 issues on day of his...