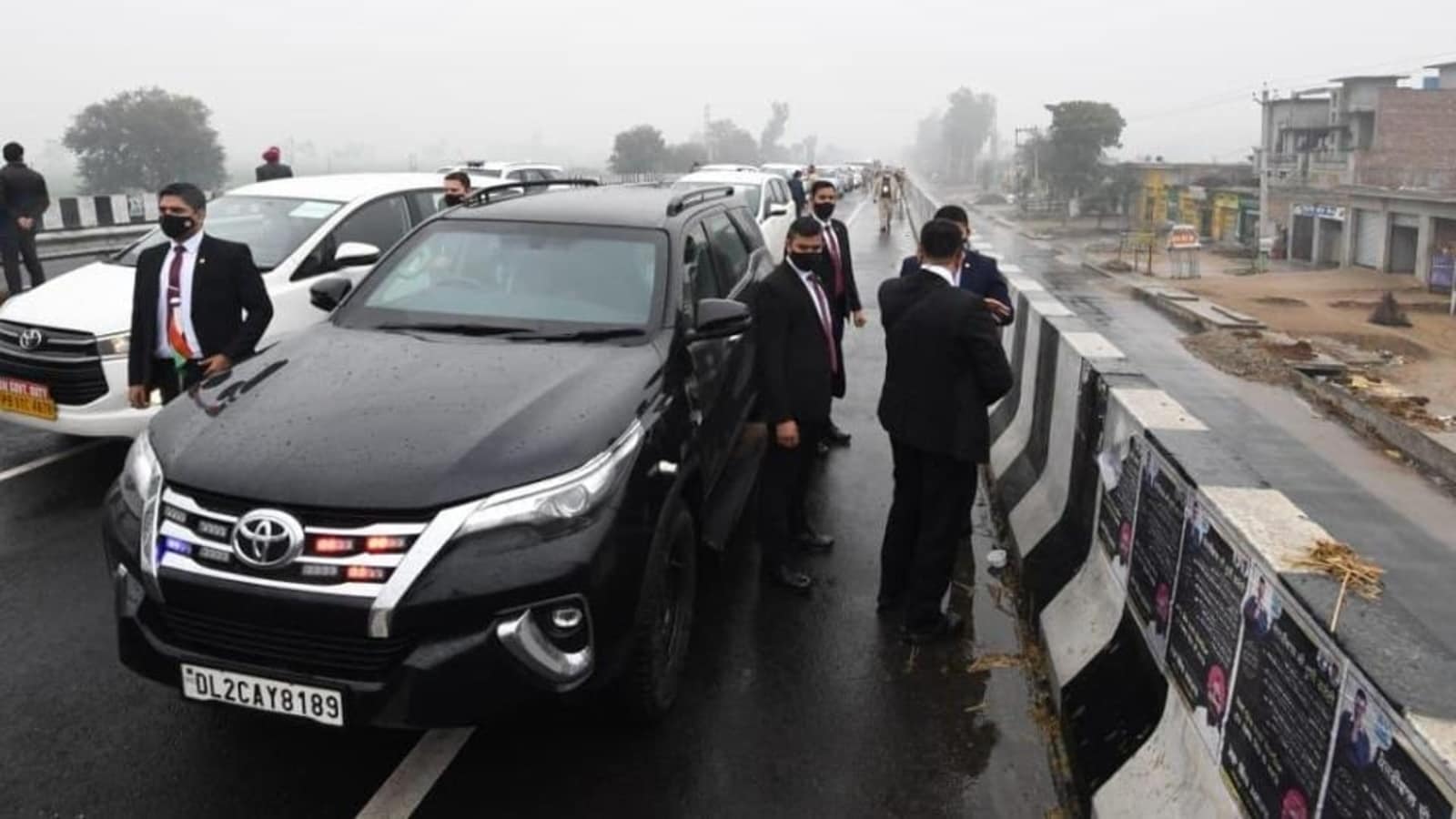 New Delhi: The Supreme Court on Friday directed that all materials related to the breach of Prime Minister Narendra Modi’s security in Punjab be kept safe with the registrar general of the Punjab and Haryana high court, while agreeing to examine a plea asking for the constitution of a court-monitored independent panel to investigate the unprecedented lapse.

During the hearing, the central government implored the bench, headed by Chief Justice of India NV Ramana, to entertain the public interest litigation filed by a lawyer-run organisation, Lawyer’s Voice, describing the breach as a “potential international embarrassment” that might have involved “cross-border terrorism”.

On its part, the Punjab government conceded in the top court that that issue was serious and could be investigated by a court-appointed independent panel.

Senior advocate Maninder Singh, the petitioner’s lawyer, threw his weight behind the provisions of the Special Protection Group (SPG) Act asserting that the issue involved did not relate to a law-and-order situation in a particular state but to national security and breach of the SPG Act.

This is a first of its kind judicial adjudication by the Supreme Court where it has entertained a PIL over the PM’s security breach after both the Centre and state government agreed to such a determination. The row involves relevant provisions of the SPG Act and it is pertinent therefore to understand the law.

What is the SPG Act?

The SPG was set up in April 1985 under the Cabinet Secretariat by the then Prime Minister Rajiv Gandhi, in the wake of the assassination of his mother, former Prime Minister Indira Gandhi by her bodyguards. The SPG Act came into being in 1988, envisaging the constitution and regulation of an armed force of the Union providing “proximate security” to the PM, former PMs and members of their immediate families residing with them at their official/allotted residences.

The term “proximate security” has been defined under the Act as protection provided from close quarters, during journey by road, rail, aircraft, watercraft on foot or any other means of transport. It will include functions, engagements, residence or halt and shall comprise ring round teams, isolation cordons, the sterile zone around and rostrum and access control to the person or members of his immediate family. “Members of immediate family” means wife, husband, children and parents of Prime Ministers or former Prime Ministers.

Crucial changes in the SPG Act:

The Act has been amended several times since its inception. When the law was notified in 1988, it provided for security of only the PM and the members of their immediate family.

On December 2, 1989, Rajiv Gandhi demitted the office of Prime Minister and in May 1991, he was assassinated. A need was felt to also bring former PMs and their immediate family members under the umbrella of the SPG Act. Therefore, a Bill passed by Parliament that brought forth the necessary amendment with effect from September 25, 1991.

The original Act spoke of providing security for a period of five years after demitting office. In November 1994, the Act was amended to extend the period of security from a period of five to ten years from the date of the PM demitting office. Again in 2003, the Act was changed extending SPG cover to former PMs and their immediate family members to one year from the date on which the former PM ceased to hold office. The SPG cover could however be extended beyond one year to the former PM or his immediate family based on the level of threat assessed by the central government. While deciding the level of threat, the Centre had to take into account, among other things, the threat emanating from any militant or terrorist organisation, and the continuing nature of such threats.

The latest amendments in the Act came in 2019. The law was changed to provide for SPG security to the family of PMs only when they stay at the official residence. Similarly, security cover is to be provided to former PMs and their immediate families, living at the residence allotted to them.

The period of one year, extendable following a threat assessment of former PMs and their family members, was also changed to five years but with no exception. The 2019 amendment stated that SPG security cover will be provided for a period of five years from the date on which the PM ceases to hold the office.

The 2019 amendments were passed in November 2019, close on the heels of removal of the SPG security to Congress President Sonia Gandhi, her son Rahul Gandhi and daughter Priyanka Gandhi Vadra. In October 2019, the security cover to the three was downgraded to Z-plus category protection across India, which entitles them to protection by the Central Reserve Police Force. Earlier in August 2019, the government had withdrawn former PM Manmohan Singh’s SPG cover too.

Prime Minister Narendra Modi is now the only leader with SPG security.

Can a PM refuse the SPG security cover?

No. The PM cannot refuse the security cover by the elite group, which is headed by a director. The SPG Act lays down that any former PM or any member of the immediate family of the PM or of a former PM may decline proximate security but there is no such concession or exemption available to a sitting PM.

Who controls the SPG?

The Act further empowers the Centre to confer any member of the Group such powers or duties as may be specified in the said order for giving effect to the law. Under the legislation, all such orders, as well as changes in the rules, have to be laid before parliament.

SPG officers are protected from prosecution or any other legal proceeding for any act done in good faith under the authority conferred on them by the Centre.

Supreme Court and the SPG Act:

The petition on PM Modi’s security breach is only the second time in judicial history when the apex court is expected to examine the scope of the SPG Act. The only instance in the past related to former PM PV Narasimha Rao was when he was summoned by a Delhi trial court as an accused in a corruption case in 1996. The SPG director and commissioner of Delhi Police moved the Supreme Court, complaining it was almost impossible for them to provide proximate security satisfactorily to Rao at the Tis Hazari Court complex in the Capital. Since the Delhi high court declined to shift the venue of Rao’s trial, the Supreme Court was called upon to take a call keeping in view the objective and rationale behind the SPG Act.

The top court underlined that the security available in courts and other places of governance can be no match or substitute to the statutory security affordable to a former PM as it highlighted the ambit of Section 14 of the SPG Act – one of the most significant provisions of the legislation conferring wide powers on the Group.

Section 14 states: “It shall be the duty of every Ministry and Department of the Central Government or the State Government or the Union territory Administration, every Indian Mission, every local or other authority or every civil or military authority to act in aid of the Director or any member of the Group whenever called upon to do so in furtherance of the duties and responsibilities assigned to such Director or member.”

The Supreme Court, in Rao’s case, disapproved the view taken by the administrative committee of the Delhi high court that neither was an accused who is a SPG protectee summoned to court entitled to proximate security, nor could the summoning court be required to assist the Group in terms of Section 14.

“We cannot help remarking that the will of the Parliament reflected in the Act is bold, unequivocal, comprehensive and wide in nature; no-where permitting withdrawal, limiting or proscribing of their proximate security statutorily conferred on the protecteee. The mere fact that the protectee has to go to court as an undertrial, does not disentitle him to the proximate security,” held the bench a bench of justices MM Punchi and K T Thomas

It emphasised that the SPG cannot be absolved from its “statutory responsibility” by shifting the burden to protect on courts or some other authorities and that even in court custody or other custody as ordered by the court, the SPG protective cover cannot be lifted from the protectee.

“It (SPG cover) goes with the person of the protectee as the shadow would a man… the protectee is a protectee all the time, as long as he keeps breathing for the period of ten years (the period of protection in 1996), from the date he demits office of the PM,” noted the bench.

It also defined the scope of Section 14, which enjoins a duty upon all authorities in Centre and states to act as per instructions received from the SPG. “The language (in Section 14) employed is wide enough to include assistance to the Group from all civil and local authorities when taking a protectee to a court of law. We see no reason why the court Administration is isolated from such requirement as long as the assistance sought does not obstruct or in any other manner hinders court proceedings,” ruled the court.

The Supreme Court then set aside the decision of the high court and directed it to examine the issue afresh after considering the provisions of the SPG Act. The high court was further asked to shift the venue of the trial to some other place and Rao was granted exemption from his personal appearance before the trial court until a new venue was decided. The trial in the case was eventually shifted to Vigyan Bhavan in Delhi.

Articles 141 and 144 secure the Supreme Court a pivotal place in the judicial hierarchy, making it binding on all the subordinate courts and other authorities to follow the rulings of the apex court. A similar obligation visits the authorities at the Centre and in states under Section 14 of the SPG Act when it comes to instructions received by them from the Group on protection of the PM.

It will be interesting to see if the latest row over PM’s security breach prompts judicial determination in the SPG Act and the duty cast upon central and state authorities in a federal structure, and the consequences of any breach in fulfilling such obligations.

Breaking: Chennai-Durgapur SpiceJet flight returns to base after engine issues

After suspension of flights last year, Seaplane service to restart as...

Rural elections in Odisha conclude with highest ever turnout of over...