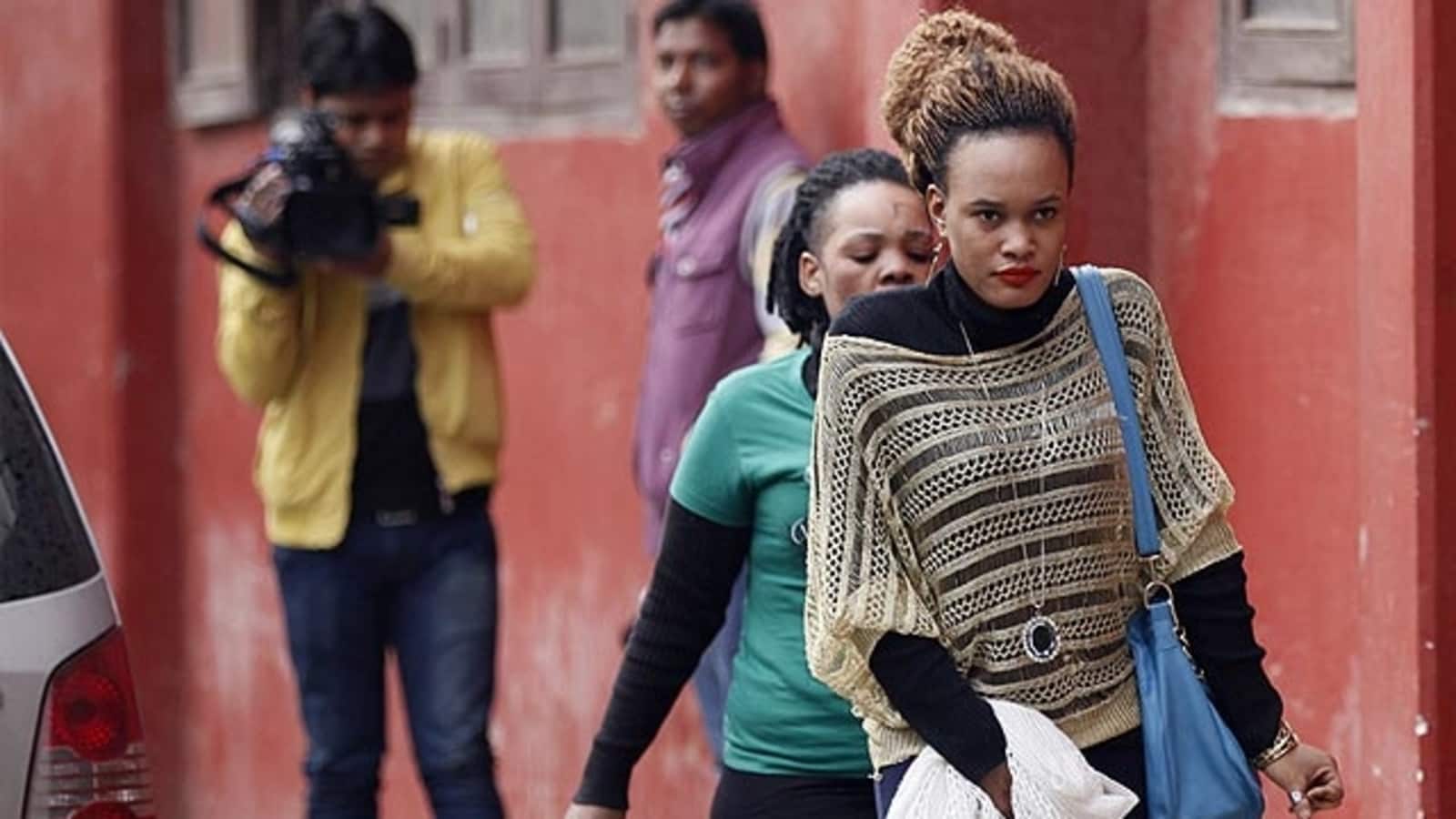 Bablu Gupta runs a departmental store in R block of west Delhi’s Mohan Garden with two names displayed on either side. The original name is MH Food mart, but in the last few years, Gupta has added another name – African Food Shop – for the new residents of the colony.

Next to Gupta’s shop is Attraction Unisex Saloon, run by a Nigerian man. His customers are mostly people from African nations who have settled in the area in recent years. Some distance away is Franco African, a shop that sells edible items with ties to African nations.

The reason: Hundreds of people from various African countries who have settled in Mohan Garden in the past five years, often moving away from other areas like Malviya Nagar after facing humiliation and discrimination, and making the humble neighbourhood Delhi’s new African enclave.

Chiyozu, who works at a saloon, said that he directly came to Mohan Garden about three years ago from Nigeria, but his friends were earlier living in Malviya Nagar and Lajpat Nagar.

“I live with my wife and daughter. Some of my friends had troubles living in parts of south Delhi. Foreigners like us are assumed to be criminals, who live illegally and do drugs. In south Delhi, that was the problem they faced. The media and police also visited there regularly so there was no privacy,” he said.

Local residents said the influx of people from various African countries was due to reasonable rents in the area.

“It wasn’t like this until 5-6 years ago. One would hardly see a foreigner on the streets here. Today, you will find around 60-80 shops being run by the foreigners, that cater to people from African nations here,” said Alok Gupta, a member of the A-block Resident Welfare Association.

Mohan Garden represents a growing trend in the Capital of people from African nations being forced to move from south Delhi localities such as Khirki Extension, Chhatarpur, Kishangarh and Mehrauli to west Delhi colonies such as Tilak Nagar, Vikaspuri and Mohan Garden. They say the shift was necessitated by hostilities and racism from local residents, who often accused them of being criminals.

A middle-income neighbourhood on the western fringes of the Capital, Mohan Garden was a nondescript area known for its abundant farm land till three decades ago.

With the Delhi Metro making its way to nearby Uttam Nagar about 15 years ago, the area quickly developed, becoming an affordable residential colony with land rates much lower than other west Delhi localities such as Janakpuri or Tilak Nagar.

About three years ago, local residents started noticing the first foreigners in the area, where rents were often a third of more upscale localities in south Delhi. But many people from African nations said a bigger reason to leave their old neighbourhoods was the everyday discrimination they faced.

A 28-year-old man from Nigeria was one of them. The man, who requested anonymity for security reasons, said he worked at a local salon, and shifted to Mohan Garden from Malviya Nagar.

“I want to clarify that I am living legally here. I have my papers and carry them round the clock,” he said.

The man said he came about three years ago to work at a salon owned by a friend from his native village in Nigeria. “We had a salon in Malviya Nagar, too, but were forced to shut shop as the population of African people decreased in that area. My friend told me that until five years ago, he would get about 10-15 customers daily. But people started leaving the place and shifted here. Business is good here,” he said.

He said Mohan Garden was cheaper to live in than Malviya Nagar. “Here, we pay a rent of about ₹8,000- ₹10,000 for a one room set. In south Delhi, it would cost almost three times for the same space. Even shops here are easily available on rent. It is difficult to find spaces and that too at reasonable rates there (Malviya Nagar),” he added.

But even in their new home, problems linger. In the last two-and-a half months, Delhi Police caught and deported at least 180 people from African nations who were allegedly living illegally in Mohan Garden. Police said all 180 people overstayed in the country or were involved in crimes.

Officers involved in these operations said they were going door-to-door to check the papers of foreigners. They added that they launched operation “Varchasv” (domination) after receiving complaints from local residents about alleged criminal activities by the African residents.

On October 2, police busted a heroin manufacturing unit from a ground-floor building and arrested three men from R Extension Block of Mohan Garden, who were allegedly living on an expired visa. Police recovered 1.3 kg of heroin and claimed there was a factory on the terrace of this building and launched a crackdown against house owners who give their premises on rent to foreigners without getting their documents verified by police.

At least 11 persons from Mohan Garden were booked in this connection under Section 188 of the Indian Penal Code (disobedience to order issued by public servant). It is mandatory to conduct tenant verification in Delhi.

Some local residents have also been less than welcoming. Anil Aggarwal, president of the R Block RWA said some “greedy locals” were responsible for the influx of foreigners in the area. “The foreigners are ready to pay twice the rent than locals. This is why their numbers have increased. For those living illegally, the rent is much cheaper compared to the other places in Delhi. From a business point of view, it is working. Not all foreigners are involved in crime, but some of them are and the cases are only increasing,” he said.

Thousands of people from various African countries live in Delhi but members of the community battle repeated racist attacks and discrimination at the hands of local residents and politicians.

In 2014, a midnight raid by a former Delhi minister Somnath Bharti at the house of some foreigners triggered a huge row. Bharti said he merely accompanied the local residents after receiving complaints of drug smuggling and prostitution racket being run by nine women.

In 2016, a 29-year-old Congolese teacher was allegedly beaten to death over a petty dispute in south Delhi’s Kishangarh. The same year, in the twin villages of Rajpur Khurd and Maidan Garhi in Chhatarpur, there were four cases of attacks on African nationals.

On September 26,2021, rioting broke out outside the Mohan Garden police station after 100 people from different African countries protested against police and accused them of killing an African national while chasing him.

Police say they receive many complaints from local residents against the foreigners in Mohan Garden and its nearby areas such as Uttam Nagar and Dabri.

In the first week of November, the police in Dwarka — the policing district under which Mohan Garden falls — formed a cell called CAIFAN (Cell Against Illegal Foreigners and Narcotics). The unit has busted at least 200 illegal foreigners and three reported cases of drug smuggling so far. Police claim that in the last two months, CAIFAN has recovered drugs worth ₹120 crore in the international market.

“CAIFAN has not been formed to harass legal residents. We are taking action only against those living illegally or without proper documents and indulging in crimes. Our officers are working round the clock and developing intelligence to crack down on illegal activities by foreigners,” said deputy commissioner of police (Dwarka) Shankar Chaudhary.

Local residents have cheered the police action and said it will stop Mohan Garden from becoming “infamous as Malviya Nagar”. But the police crackdown has struck fear among many people from African countries, who say they are scared of being targeted.

Christian Chinonso, a shopkeeper in Mohan Garden who lives with his wife and children, is one of them, “We have all the necessary papers. We are worried about the high number of foreigners being arrested and deported from here. Police are randomly stopping our people and asking us to produce our papers. I know it is the right thing but this has scared me. I step out only when necessary.”

Odisha raises upper age limit for govt jobs from 32 to...

Omicron: ‘No vaccine, no entry’ campaign to kick off in Nashik...