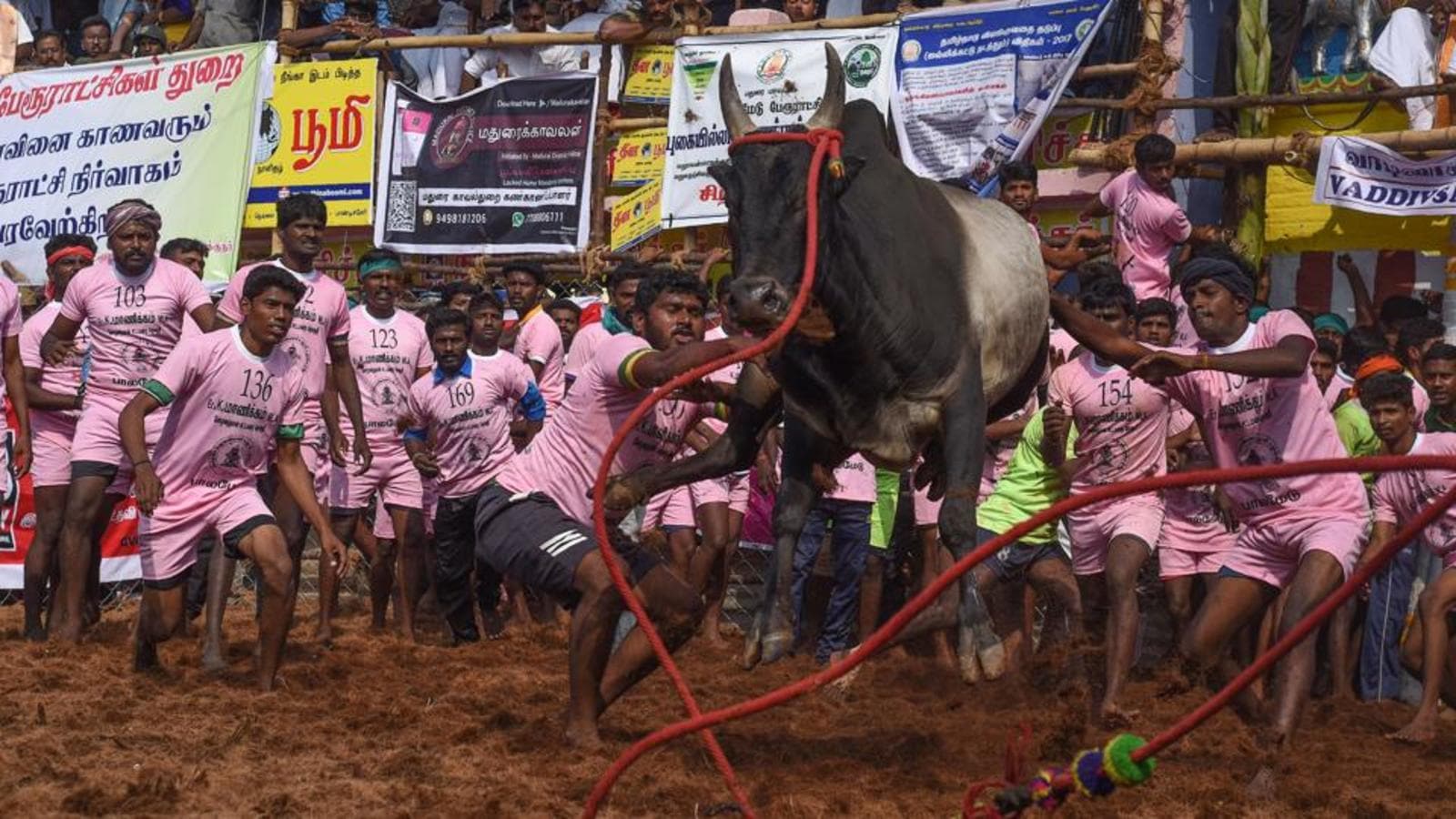 Like last year, Tamil Nadu on Monday allowed the popular and traditional bull-taming sport, Jallikattu, with a list of standard operating procedures amid the surge in Covid-19 cases driven by the Omicron variant.

The controversial sport is conducted annually during the three-day harvest festival of Pongal, which begins on January 14 this year.

Double vaccination and a negative RT-PCR test not older than 48 hours have been mandated for players, spectators and officials in charge of conducting the event, said a government order.

Like last year when the AIADMK government allowed the sport with pandemic-related conditions, this year too the state under the DMK government, has capped the maximum number of spectators to be allowed. It is either 50% of the seating capacity in an open arena or a maximum of 150 viewers depending on whichever is lower.

AK Moorthy, Madurai East MLA and commercial taxes, registration and stamp law minister, told reporters that they will control the crowd on the spot. “The decision on who can enter will not made ahead. It will be made then and there and only 150 people will be allowed and if more people come, we will ask them to come back later in the day.”

Only two persons – the owner of the bull and an assistant – will be allowed inside the arena with each bull. District administrations will provide ID cards to the two people and the participants. “Only those with valid identity cards provided by the district administration will be allowed inside the arena,” the government’s order said. The district authorities have been directed to complete the process of issuing ID cards to owners and players three days before the event. Those present at the event have been instructed to wear masks and adhere to social distancing norms.

The famous Jallikattu events are held in Alanganallur, Avanipuram and Palamedu in Madurai district with a huge fanfare, while several smaller scale events are held across Tamil Nadu.

“Due to the coronavirus, bulls and players from one place cannot participate in another place. For instance, nobody from Alanganallur can enter Avanipuram,” A K Moorthy, Madurai East MLA of and the minister for commercial taxes, registration and stamp law, told reporters.

Last year, Congress leader Rahul Gandhi watched the event along with DMK leader Udhaynidhi Stalin in Madurai ahead of the elections held on April 6 which their coalition won.

Jallikattu has gone through legal tangles. In 2014, the Supreme Court had banned the event following an appeal by the Animal Welfare Board of India and People for the Ethical Treatment of Animals (PETA). But political parties and sections of people in the state wanted Jallikattu to continue, saying the sport is part of Tamil Nadu’s tradition and culture.

In 2017, protests erupted across the state demanding lifting of the ban on Jallikattu. The Tamil Nadu government unanimously enacted a legislation to amend the Prevention of Cruelty to Animals Act, 1960, to preserve the cultural heritage and ensure survival and continuance of native breeds of bulls. Last August, the Madras high court ruled that Jallikattu can be conducted only with native breeds of bulls and prohibited using imported, hybrid and cross bulls.

According to PETA, at least 22 bulls and 69 humans have died, while more than 4,696 humans have been injured since the Tamil Nadu government legalised Jallikattu in 2017.

“PETA India has documented extreme cruelty to bulls during these events, which are attended by up to thousands of people,” the animal rights organisation said in a petition on December 22 last year.

The petition was written by 80 doctors across the country to chief minister M K Stalin and health minister M Subramanian, urging him to not allow the event this year, citing the prevailing Covid-19 situation. “Video footage of 2021 events show masses of unmasked people in close proximity, conditions ripe for the spread of COVID-19, particularly the easily transmissible Omicron variant.”

The government on Monday said the events should be organised with prior permission and in compliance with the Prevention of Cruelty to Animals Act and the pandemic-related guidelines.

5 injured, many trapped as part of building collapses

India’s Ultimate Warrior on discoveryplus App is a thrilling test of...