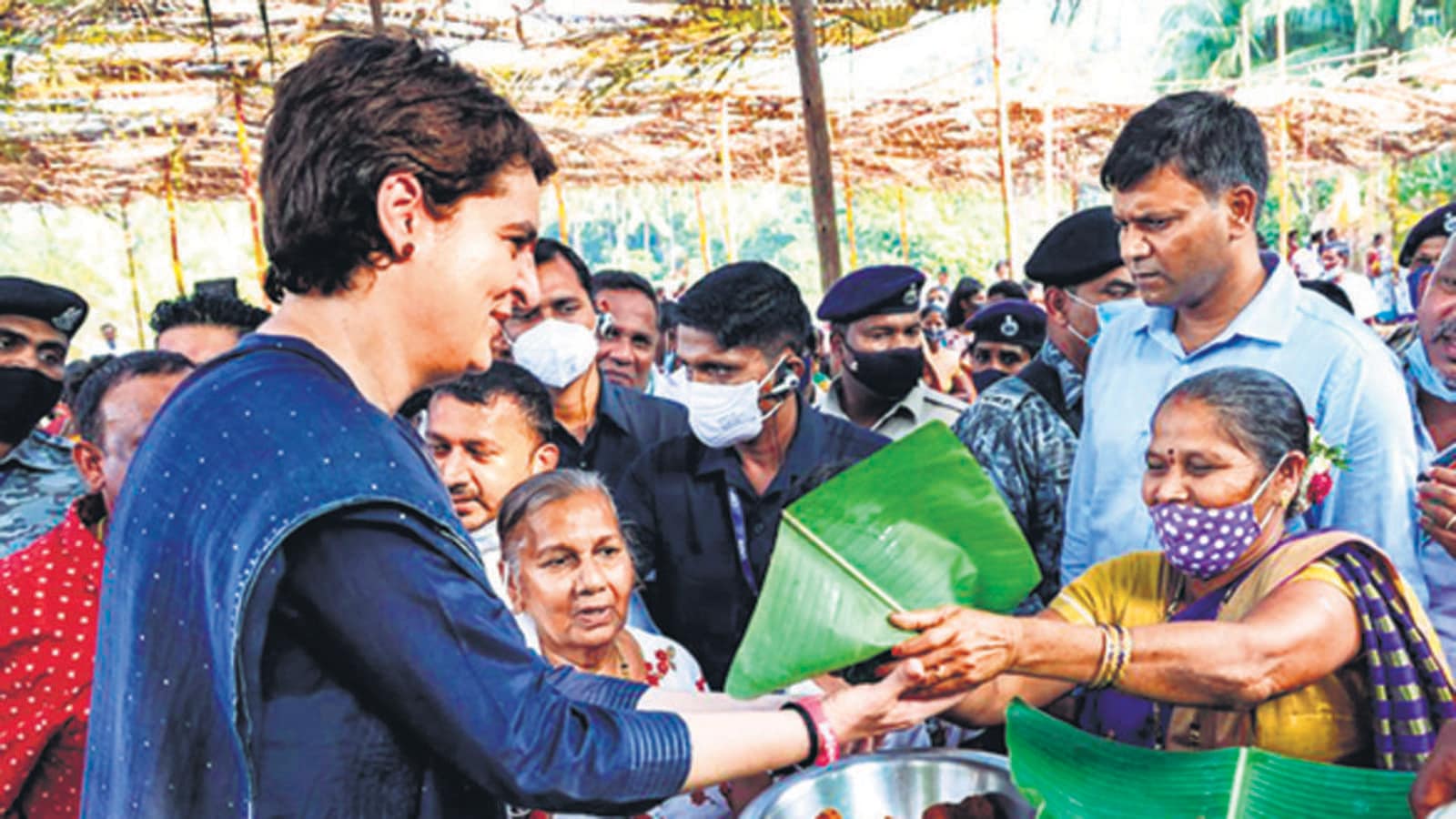 Months ahead of assembly elections, the Congress in Goa on Friday witnessed a spate of resignations and confusion prevailed over its alliance with Goa Forward Party (GFP), even as party general secretary Priyanka Gandhi Vadra arrived here for a two-day visit to campaign and review poll preparations.

As many as four Congress leaders, supported by independent MLA Rohan Khaunte, tendered their resignation citing the slow pace of the party’s decision making process.

In south Goa, zilla parishad leader Moreno Rebelo quit the party after the party announced the “candidature” to sitting MLA Aleixo Reginaldo Lourenco from Curtorim constituency “despite him working against the party”.

Rebelo, in this resignation letter, said Lourenco “has never participated in any party activity for the last four-and-a-half years and on the contrary only abused party leaders.”

“(He) worked against the official candidate of Curtorim in the recently held Zilla Panchayat election (Moreno was the official Congress candidate), is promoted as working president of the party and is declared as a candidate by senior leaders during a recently held convention,” he said.

Addressing reporters on the resignations, Khaunte said his supporters felt “humiliated by the Congress”. He added that he was earlier contemplating joining the Congress but has now decided to once again contest as an independent keeping in mind his success in two elections in a row.

Besides the resignations, confusion prevailed over the party’s alliance with GFP which was speculated to be sealed when its leader Vijay Sardesai met Congress leader Rahul Gandhi in Delhi on December 1.

Congress’s observer for Goa elections and veteran leader P Chidambaram, however, said GFP had only extended support to the Congress and refused to term it as an alliance at this stage.

After his meeting with Rahul earlier this month, Sardesai had tweeted: “We agreed to fight resolutely, wholeheartedly and unitedly on behalf of the people of #Goa to end the utterly corrupt, incompetent and undemocratic reign of @BJP4Goa…Proud to be working for the 2nd liberation of #Goa with the great grandson of the person who enabled the 1st!.”

Chidambaram claimed “the word alliance is all used indiscriminately”. “This word alliance is all used indiscriminately. So far, we have had one party leader, Vijai Sardesai, who came to Delhi and said ‘in order to defeat the Bharatiya Janata Party (BJP), my party offered its support to the Congress party’. Rahul Gandhi said we accept the support. That is where it stands. All other details will have to be discussed further,” Chidambaram told reporters here.

Within minutes of his statement, senior Congress leader Dinesh Gundu Rao said he has proposed a meeting between GFP chief Vijai Sardesai and Chodankar on Saturday.

“I have invited Sri @VijaiSardesai, President of @Goaforwardparty for a meeting with Sri @girishgoa, President of @INCGoa and others on 11/12/21, 10 am at Congress Election Office, Patto Plaza, Panjim,” Rao tweeted.

The developments came on a day Priyanka Gandhi Vadra arrived in the state to campaign for the upcoming elections.

The Congress leader alleged that real empowerment of women cannot take place under the present BJP rule in the state as their “ideology from its roots is against women”.

“The BJP’s ideology right from its roots is against women. BJP’s ideology will never want women empowerment. When they come and talk about women, when you see their schemes for women, it is only about providing gas cylinders and dole money for the household. And they think that this ends their responsibility towards women,” she said.

Earlier in the day, Vadra held a series of interactions with tribal women in the remote Morpirla village in south Goa, where she urged them to fight for their own rights.

Taking potshots at the Aam Aadmi Party and Trinamool Congress (TMC), she said the two parties were not concerned about the development of Goa.

“This is the last chance to save Goa. You can imagine what kind of destruction that will take place if this BJP government is given another ten years of power or if a party that only thinks about power and not genuine concern for the state is given power. So vote wisely,” Vadra said.

Captain Amarinder seals alliance with BJP ahead of 2022 Punjab assembly...

Covid: Haryana to allow entry of only fully jabbed in public...