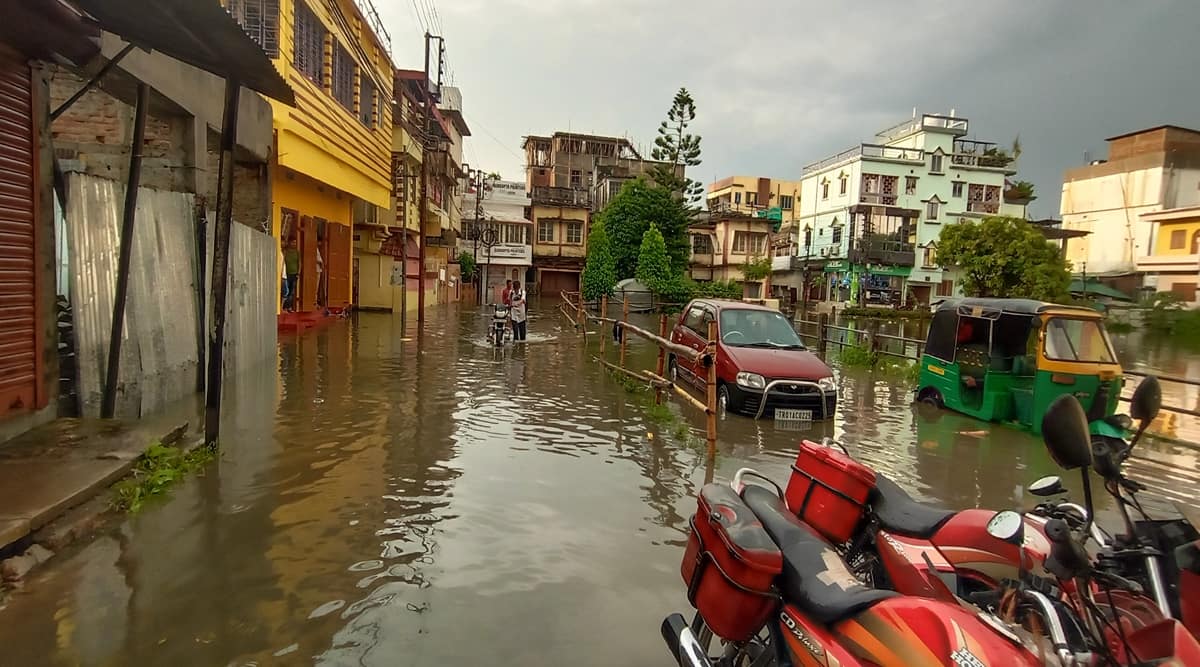 As incessant rain continues to batter Tripura and the northeast, several areas in capital Agartala remained waterlogged and at least 19 houses were damaged in different parts of the state on Thursday.

Newly appointed Chief Minister Manik Saha reviewed the flood situation in the state and instructed the administration to construct new embankments near the city, dredge Katakhal canal and River Howrah so that the water flows out at a faster pace and ramp up use of rainwater extraction pumps in the city.

According to city officials, Agartala receives around 1,500 mm of rainfall around the year.

Speaking to reporters later in the evening, Mayor Dipak Majumder said Agartala registered a record rainfall of 167 mm — the highest the city has seen in the last several years. “Due to heavy showers, River Howrah overflowed and water rushed into the city through Kashipur and Chandrapur Inter State Bus Terminus. These, coupled with rains, caused the waterlogging,” the Mayor added.

According to city officials, Agartala receives around 1,500 mm of rainfall around the year.

The backflow of water from Katakhal canal also added to the water level of River Howrah, causing it to overflow. The Mayor further said that unregulated waste disposal and illegal encroachment of the canal area has significantly narrowed it, leading to flood conditions during heavy rains.

As many as 5,894 people in West Tripura and Khowai districts were displaced from their homes.

Chief Minister Manik Saha, former CM Biplab Kumar Deb, Mayor Dipak Majumder, and municipal corporators were seen wading through knee-deep water to review the situation in Agartala. The Mayor, who is also a senior BJP leader, said that water would have been pumped out of the city much faster if not for flooding of the Howrah river.

Rescue boats were seen picking up people stuck in floodwaters in parts of the city and its suburbs, while vehicles were seen submerged.

Agartala had witnessed similar scenes in 2019 when the water levels of River Howrah, Khowai, Gomati and Katakhal canal had gone past the safety limit. As many as 5,894 people in West Tripura and Khowai districts were displaced from their homes.

The Agartala municipality houses around five lakh people and spans across 76 sq km in area. It’s the second largest city in the Northeast after Guwahati in Assam.

We’ll have a farmers’ movement in every village: BKU chief Naresh...

IMCR issues fresh guideline for Type 1 Diabetes | What you...

‘There could have been some wrong decisions but…’: Amit Shah at...

The best time to drink water is…

I am 24-Carat Congressman, not upset with party: Ghulam Nabi Azad