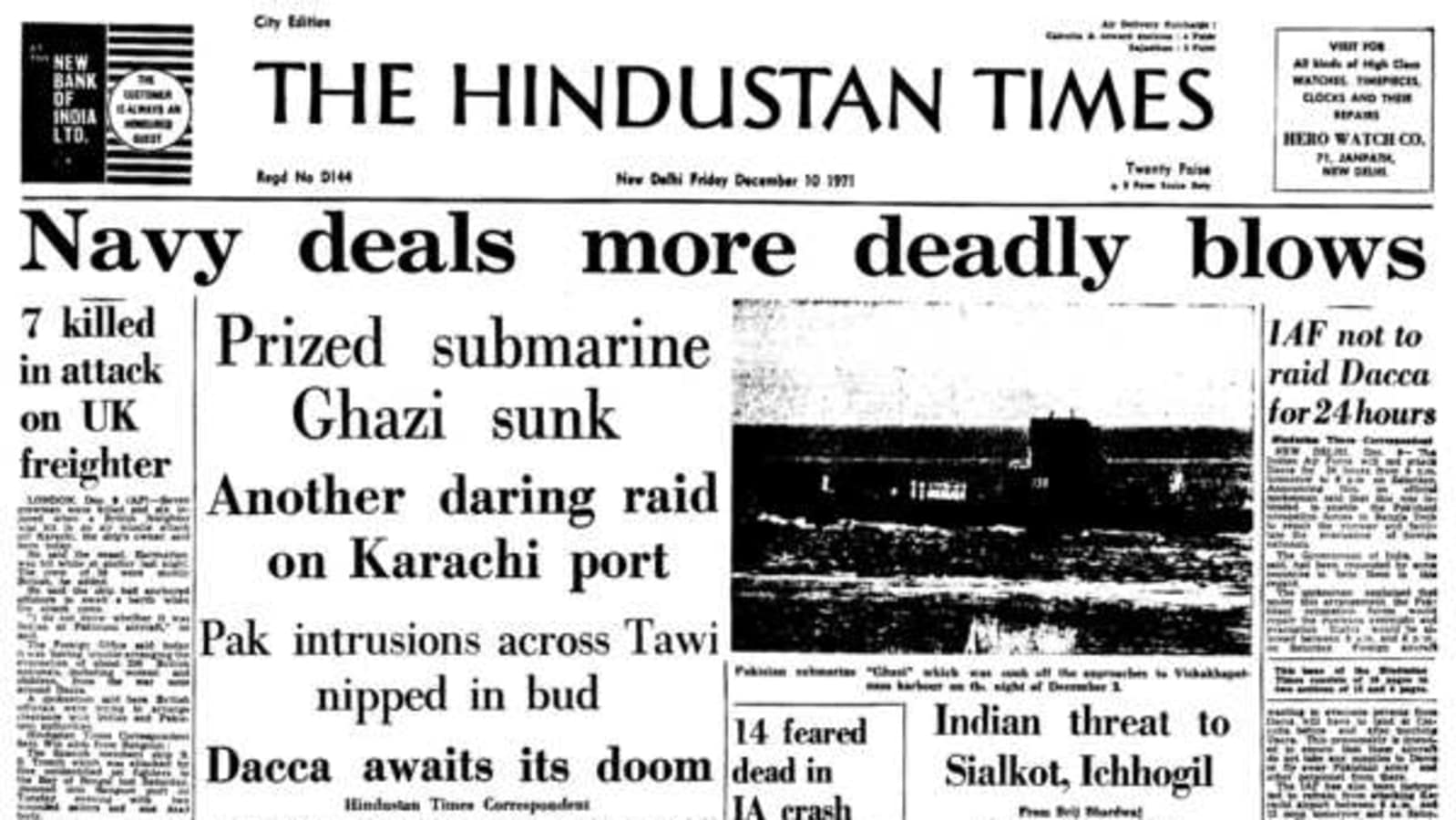 – Another daring raid on Karachi port

New Delhi -The Indian Navy has had another field day. Hell bent on destroying the enemy’s naval might, it conducted two daring raids today in the Arabian Sea, one on the Makran coast near the Pakistan-Iran border and the other on the naval installations in Karachi harbour where, only few days ago, three Pakistani Destroyers were sent to the bottom of the sea.

The sinking of the second and the biggest Pakistani submarine, the U.S. built ‘Ghazi’ off Visakhapatnam by Indian Destroyers on the night of Dec. 3, the day Pakistan declared war on India, was confirmed by the Eastern Naval Command on the basis of tell-tale, evidence -and the Defence Minister, Mr Jagjivan Ram, hastened to share the good news with cheering ‘members of the two Houses of Parliament.

While details of the damage inflicted on the enemy by the Western fleet today are awaited four ships are believed to have been either sunk or heavily damaged. Karachi reports said that in one of their heaviest raids last night, the Indian Air Force sank one merchant ship and damaged two others in Karachi harbour.

The myth of the impregnability of the Karachi naval base has thus been destroyed. As Vice Admiral Kohli, Flag Officer Commanding-in-Chief, Western Fleet stated: “The Indian Navy is in command of the high seas and we can go wherever we want. The entire coast of Pakistan right up to the border of Iran is now vulnerable to the guns of the Indian Naval ships.

Having liberated the strategic inland river port of Chandpur on the Meghna, 64 kilometers south of Dacca and Daudkandi, about 33 kilometers east, the Indian Army is tightening the noose round the city. Combined columns of the Army and Mukti Bahini are now poised for a thrust towards the Bangla Desh Capital. A few rivers have to be crossed before the advancing forces contact the city’s outer defences. The possibility of a last ditch battle by the fleeing enemy troops there is not ruled out.

While Comilla town was freed yesterday, remnants of Pakistani troops were still in the Nainamati Cantonment, which is under siege with all escape routes plugged. Indian troops have also captured Ashugunj, east of Meghna in the north, and taken 300 razakars. The Army formations proceeding from Jessore have contacted the outer defences of Kushtia and are marching in the northern sector towards Rangpur and Dinajpur, where bitter fighting is reported. Another stronghold of the occupation forces, Chaudanga, has fallen.

The advancing forces captured nearly 1,000 tonnes of ammunition near Jhaneda in the Jessore sector left behind by the retreating enemy. On the Western Front Indian troops eliminated the solitary surviving Pakistani post on the east bank of Mannawar Tawi in the Chhamb sector and established a screen of their own on the west bank. Thus, repeated enemy attempts to crash through our defences on the east bank have been frustrated.

In the Kargil area, the Army repeated its 1965 performance by capturing a 13,620 feet high hill feature, the fifth in the line, ensuring the safety of the Srinagar-Leh road.

In the Kutch sector, Nagarparker town in Hyderabad-Sind divis1on has fallen after a night-long battle. In mopping-up operations in the Jaisalmer sector, four Pak1stani Sherman tanks were found destroyed in an area 11 kilometers west of Longewala.

In the Barmer sector, our troops are in contact with the enemy near Nayachor and are also proceeding towards Umarkot. Another enemy attack on Dera Babananak Bridge in the Amritsar sector has been repulsed.

With the destruction of 73 aircraft, Pakistan Air Force has lost nearly one-fourth of its strength in the six days of war. Today, the IAF raided Pakistani airbases at Chander, Nawabshah. Jacobabad, and Hyderabad and also carried out interdiction and close support sorties in the Jaffarwal sector in the area opposite Samba, Nayachor and Chhamb sectors. The enemy aircraft attacked Srinagar, Pathankot and Amritsar airfield inflicting minor damage.

A few villages in Kashmir and near Jullundur were bombed resulting in the death of many civilians.

No Indian aircraft was lost in today’s operations, but a Pakistani 7-104 fighter was knocked out of the skies at Okha port. Pakistani reports that the IAF had bombed civilian targets were officially denied here.

Carrier-borne aircraft raided Barisal from where the retreating Pakistani troops are trying to escape. According to an agency reports the IAF sank nearly a hundred steamers, gun boats and motor boats carrying retreating enemy troops in the last 24 hours.

While you were asleep: Big wins in UEFA Nations League and...

We’re not rebels, will be in Mumbai tomorrow for trust vote:...

Modi to stay for 3 days as BJP pulls out all...

Explained: What India’s abstention on UNSC vote over Russia’s invasion of...