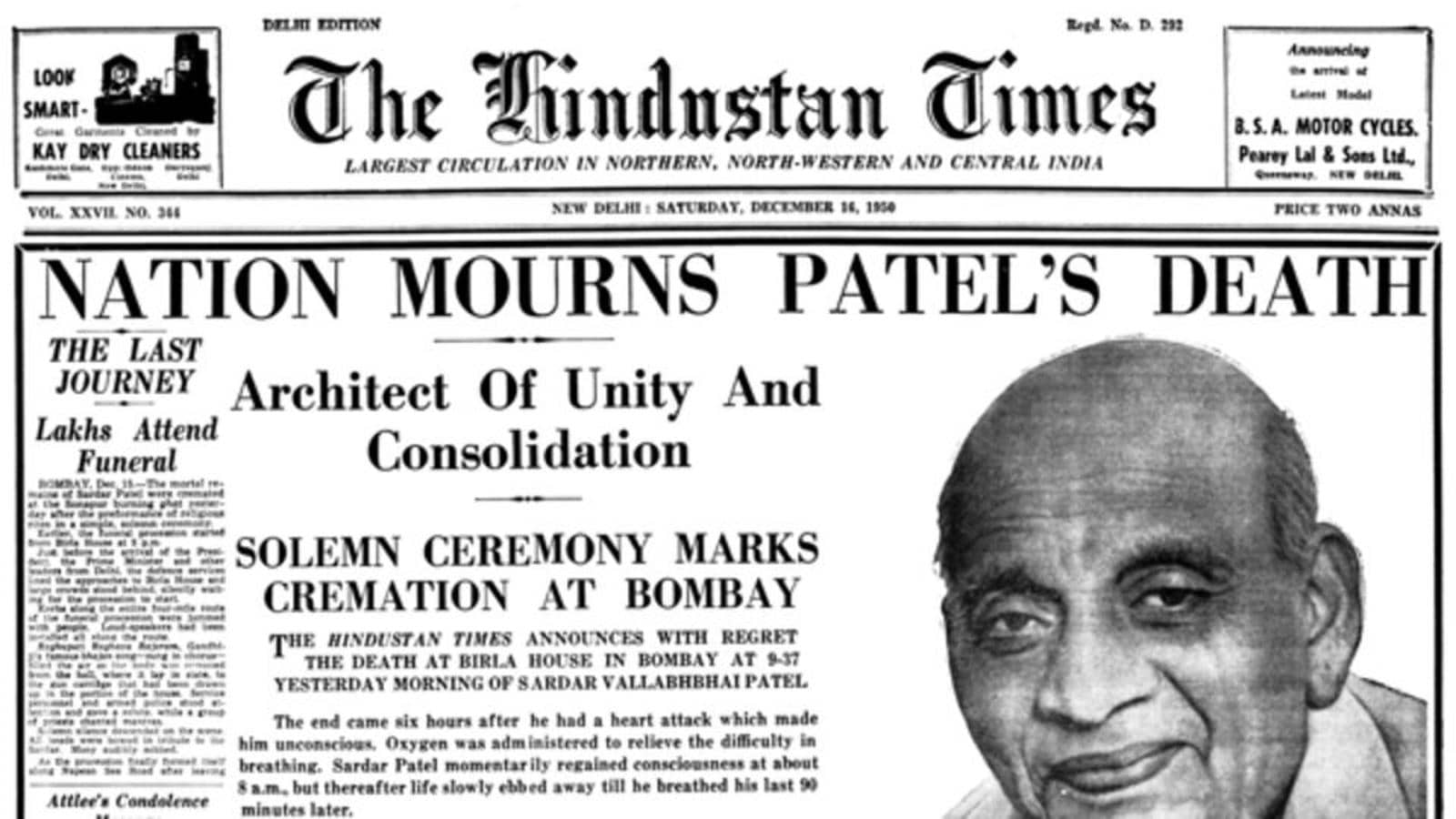 The end came six hours after he had a heart attack which made him unconscious. Oxygen was administered to relieve the difficulty in breathing. Sardar Patel momentarily regained consciousness at about 8 a.m., but thereafter life slowly ebbed away till he breathed his last 90 minutes later.

The mortal remains of the great leader were cremated at the Sonapur Burning Ghat (Chowpatty) at 7-40 p.m. near the spot where his brother, Vithalbhai Patel, was cremated 17 years ago.

After the funeral pyre was lighted by Sardar Patel’s son, Mr. Dahyabhai Patel, Mr. C. Rajagopalachari, Minister without Portfolio, Government of India, and the President, Dr Rajendra Prasad, made speeches paying tributes to the departed leader.

During the ten hours that Sardar Patel’s body remained with them, Bombay’s multitudes demonstrated the high esteem and great veneration in which the city in particular-his second home-and the country in general held Mahatma Gandhi’s right hand man.

As the common people mournfully filed past in an endless stream the Sardar’s body as it lay in state, planes were arriving every few minutes from different parts of the country carrying a cross-section of the country’s leadership and condolence messages from far and near poured in.

Then the last journey started at 5-20 p.m. along a four-mile route, with Maniben and Dahyabhai sitting on either side of the cortege and with the Sardar’s nearest colleagues immediately following in a jeep. Men of the Defence Services, so dear to him, brought up the rear of the procession.

All along the route men and women, cramming the footpaths, balconies and windows, chanted Gandhiji’s favourite prayer hymn “Raghupati-Raghava-Rajaram.” Flowers were showered on the cortege as it moved slowly along the narrow Vithalbhai Patel Road.

It was 7-20 p.m. when the procession reached the crematorium. The leaders took turns to carry on their shoulders their great comrade’s body on the last lap of the journey.

Twenty minutes later, at a spot adjacent to where his brother Vithalbhai’s ashes were mixed with the good earth, a pyre of sandalwood was going up in flames as the strains of “ Raghupati Raghava-Rajaram “ sung in chorus by Congress Desh Sevikas filled the air.

With that was becoming “air, earth and water,” what was Vallabhbhat Patel, the unflinching fighter, the great general, the sagacious administrator, the farsighted statesman and the architect of a united India.

Sardar Patel was serene throughout the brave fight he put against death. His face looked majestic and peaceful notwithstanding the intense pain he underwent during the last few hours. The end came peacefully.

Sardar Patel went to Bombay on Tuesday on medical advice, as it was considered that the milder weather of Bombay as against the severe cold of Delhi, would be beneficial to him.

The change appeared to have done him considerable good and on Tuesday he was restful. He was also comfortable during the day on Wednesday, but from about 10 p.m. there was a setback and he was restless. This condition continued intermittently with restful periods on Wednesday night and Thursday. At 3-10 a.m. yesterday he had a heart attack, similar to the one he had in Delhi last year. Doctors were summoned.

Dahyabhai Patel, Sardar Patel’s son, his daughter and constant companion. Maniben, his daughter-in-law and grandson and Mr V. Shankar, private secretary, were at his bedside since his condition became grave.

Centre aims for digital push in revamp plan for cooperatives

DCGI needs more safety data for Covaxin nod for under 12

Akhilesh, uncle Shivpal form alliance ahead of UP elections

Omicron mild or less severe? What latest observations experts have made