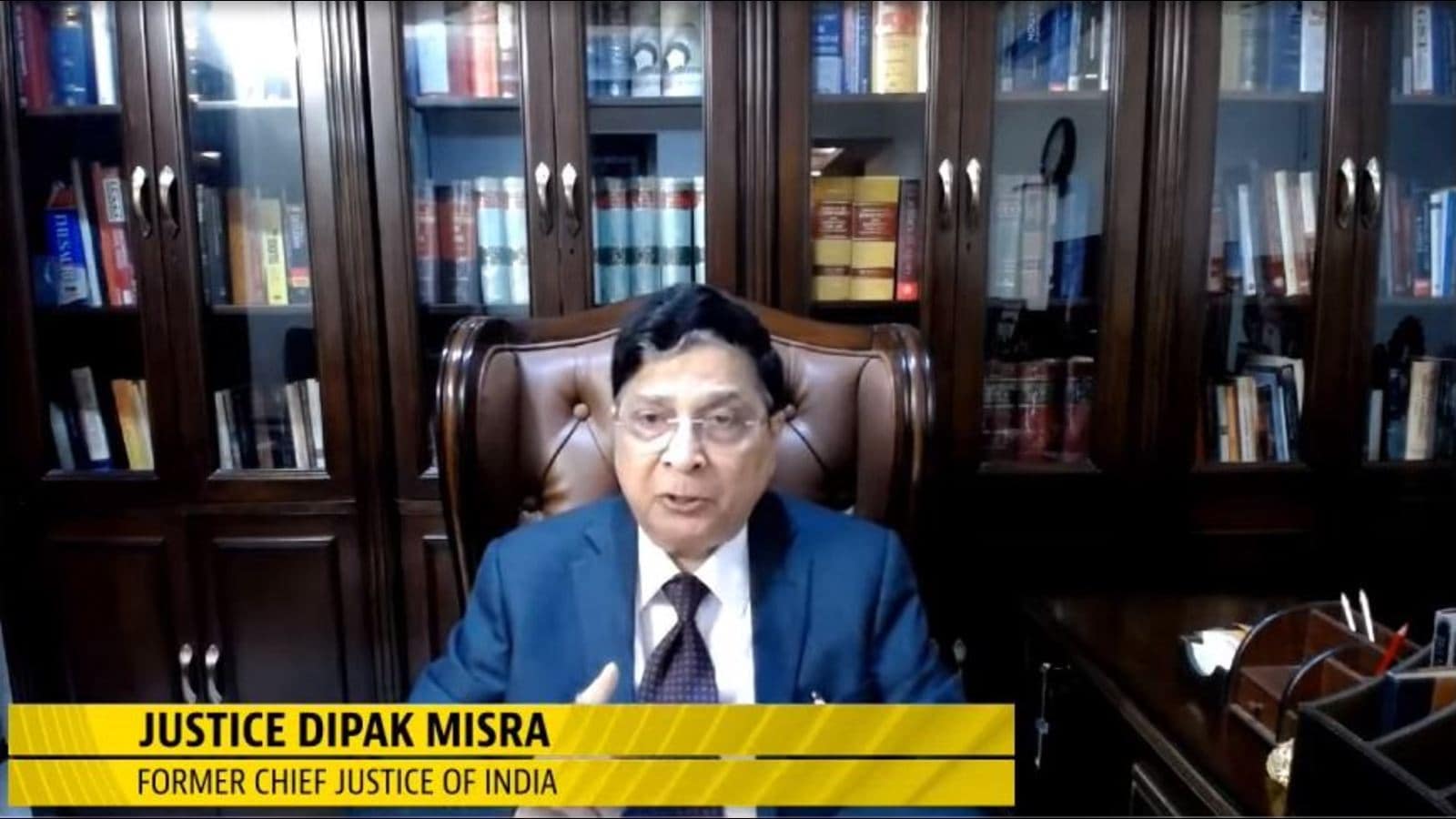 No individual should remotely be regarded as an object of “chemical experimentation” since legitimate expectations of every citizen have to be met in a constitutional democracy, said former chief justice of India (CJI) Dipak Misra on Thursday.

Ascribing a pivotal role to the judiciary as being the final arbiter of the Constitution, justice Misra emphasised that the emerging world order calls for a constitutional democracy to adorn its expected role for effective implementation of constitutional rights.

“It is the obligation of the courts to see that such rights are not even slightly affected or dented,” said the former CJI, who gave the Indian judiciary one of its finest moments by churning out landmark verdicts on gender equality, decriminalising homosexuality, and guarding free speech among a host of decisions that form the bedrock of citizens’ aspirations in a democracy.

Addressing the 19th edition of the Hindustan Times Leadership Summit, justice Misra added: “The judiciary, while performing its most important function of being the final arbiter of the Constitution, has acted as the protector of rights guaranteed under the Constitution by embarking upon the journey of fruitful engagement. The legitimate expectations of a citizen under the Constitution have to be met and no individual should remotely be regarded as an object of chemical experimentation.”

Underscoring the function of the Supreme Court and high courts in a meaningful democracy, the former judge said that the constitutional courts have assumed the role of ardent guards for strengthening the rights and this shaped the process of judicial statesmanship.

“This sense of creativity is the order of the day and it is not to be marginalised by any competitive conservative perception,” said justice Misra as he spoke on the theme ‘Changing dynamics of law and the new world order”.

While serving 13 eventful months at the helm of the judiciary till his superannuation in October 2018, justice Misra was instrumental in allowing entry for women of all ages into the Sabarimala temple, recognising the right of choice of an adult individual to marry, abolishing adultery as a crime, decriminalising homosexuality, and upholding Aadhaar’s constitutional validity.

The former judge maintained that constitutional rights are ever growing so as to enrich the future life of its citizenry and to be compatible with the changing needs of the society.

“The discussion about free will and freedom bear a direct relation to one’s right to affirm to one’s gender identity… the right to choose and the right to self-determination have been recognised as aspects of human dignity. It is also emphasised that in some circumstances like that of affirming one’s gender identity, it is an integral part of human dignity that will sustain the individuality of an individual,” added justice Misra, acknowledging the approach adopted by the Supreme Court in recognising some of the most important fundamental rights.

“Therefore, modern constitutional thinking crafts principles that same-sex relationship is not a criminal offence; live-in relationship is not illegal; a major has a right to marry according to his or her choice and no one should intervene; the inter-religious or inter-caste marriages are to be respected if it is with consent; the khap panchayats should keep themselves at bay; no one can take law unto his own hands and engage in mob lynching,” highlighted the former CJI.

Citing the expansive approach of the apex court in broadening and strengthening fundamental rights of people, justice Misra underlined some recent verdicts that held that a filmmaker or author can express his ideas and a law cannot accept a provision to be valid if it has chilling effect on freedom of speech and expression; women are entitled to join the National Defence Academy and are eligible to Permanent Commission into the Army; and to establish an offence under POCSO (Protection of Children from Sexual Offences Act), skin-to-skin contact is not relevant.

Notably, many of the judgements referred to by justice Misra were authored by him during his tenure as a Supreme Court judge.

“Constitutional rights define and shape the life of citizens and the society in general. Their affirmative exposition and meaningful appreciation constitute the lifeblood of citizenry aspirations,” said justice Misra, coining the term “transformative constitutionalism” and explaining it by saying: “Constitutional rights have to be construed and developed in such a manner that their real intent and existence percolate to the lowest rungs in the society.”

Recognising the paradigm shift the pandemic has brought about by allowing litigants to access courts virtually and the new arrangement of online dispute resolution, the former CJI said: “The openness of mind to accept the idea would be the real adaptation of the new order. Of course, while saying so, I am absolutely conscious of the fact that physical hearings can never be dispensed with. However, both can coexist to mark the manifestation of the new order since adaptation of the new technology has become the warrant of the time. It would redefine access to justice, which is a fundamental right under the Constitution.”

Justice Misra also mentioned the use of technology for online dispute resolution (ODR), saying the new arrangement should be accepted with an open mind as it is in challenging times that innovations are made and technology can be used as a transformational tool.

“In the emerging world order, the significance of Alternative Dispute Resolution (ADR) has risen and the Covid-19 pandemic has enabled the disputants to take recourse to Online Dispute Resolution (ODR). The present pandemic conditions have brought in private dispute resolution centres and courts around the world have embraced technology-based approach and adequate protocols have been allowed entry to make video-conferencing-enabled participation in proceedings,” he said.

The former CJI implored the new generation to be forward-looking and receptive to all new ideas.

“The new generation, I am absolutely indubitable, will not allow the path of progress to be paralysed. They shall not permit any dent or allow any decay; and move on the path of progressive purpose without giving any room to pointlessness,” said the judge, concluding his address at the summit.

‘Everyone knows Chandrababu is in frustration’: Jagan on Naidu’s breakdown