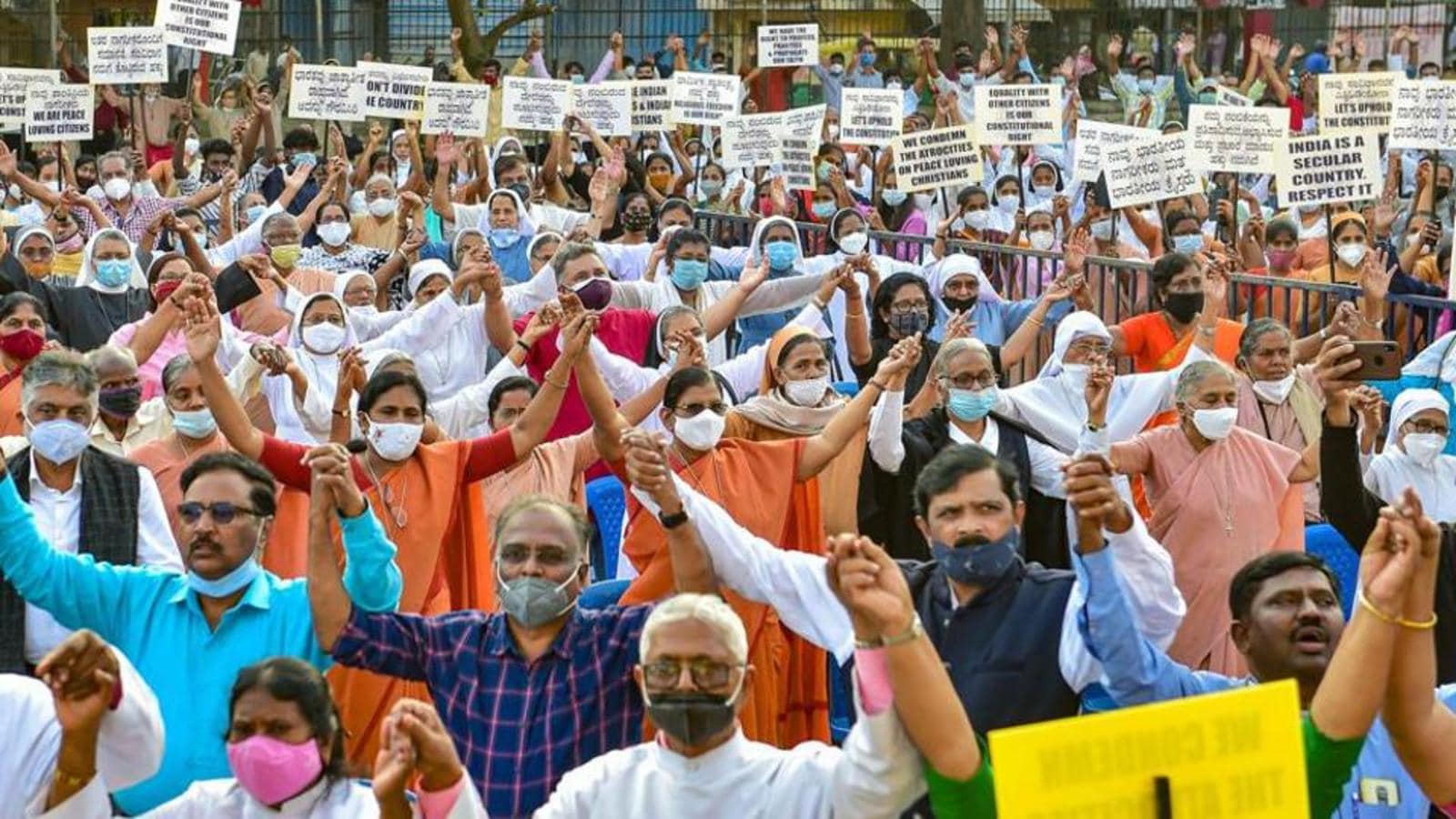 In 11 months, Karnataka reported 39 incidents of hate crimes against the Christian community in Karnataka in 2021, said a report by the People’s Union for Civil Liberties (PUCL) on Tuesday.

The report, titled ‘Criminalizing the Practice of Faith’, listed out the 39 incidents and went on to add that in some cases the police department and some politicians colluded with right-wing organisations in carrying out these attacks.

“Given the frequency and intensity of these attacks, our report relies on the Christian community’s narratives of surviving majoritarian violence. The members of the Christian community especially in rural Karnataka continue to face threats of violence, discrimination, and survival during their everyday lives,” the report stated.

According to PUCL, the report documented attacks on pastors, believers, and Churches in Karnataka between January and November 2021, the modus operandi of the right-wing groups behind these attacks and the patterns that emerge from these attacks.

“There have been attacks in Karnataka that have been sponsored by the state. Not only has the state failed to book perpetrators, but also booked the victims in several cases. We demand that the government should follow the Tahseen Poonawalla judgement and make sure justice is done to them (the Christian community). We also want to ensure that the (Anti-conversion) bill is opposed strongly,” said a former head of Amnesty International India, who was one of the members who launched the report.

According to the report, in most cases, Christians have been forced to shut down their places of worship and stopped from assembling for their Sunday prayers. “Effectively, these attacks on praying in a gathering that is enforced by Hindutva groups with the complicity of the State function as a bar on the freedom to practice religion itself. Far from the right to propagate religion, today the attacks in Karnataka are on the right to freely profess and practise religion,” read the report.

“In many cases of mob violence, the police arrested pastors and believers. They even issued formal notices to churches to stop prayer meetings. This failure of the State further marginalizes a minority community in how they live their lives struggling to access education, shelter, food, livelihood, and basic dignity during Covid,” it added.

The report listed several right-wing organizations, alleging their role in the attack and it went on to say that two MLAs of the ruling Bharatiya Janata Party (BJP), too, were involved in the attacks. “In two instances of hate crimes in Karwar (October 4) and Mandya (January 25), Bharatiya Janata Party MLA Sunil Kumar and 3-time BJP MLA Narayana Gowda (currently Minister of State for Youth Empowerment and Sports, Planning, Program monitoring, and Statistics) were also named as people who supported the police in targeting Christians,” the report said.

While the two BJP legislators were not available for comments, BJP spokesperson Ganesh Karnik denied these allegations. “Leaders mentioned in the report, especially Sunil Kumar, are leaders are who are bringing the cadre together in Karnataka for BJP, and this is an attempt to tarnish their reputation. The party has not indulged in any violence, but it only wants to bring a bill that stops force conversions in the state. The report is not factual,” said Karnik.

Apart from the attacks and the role of the right-wing organisations, the report pointed out a larger issue of social boycott and dissemination faced by the Christian community. “What is particularly alarming is the discrimination and social boycott that the Christians have faced from persons who are not a part of these Hindutva organizations. Such as their neighbours, landowners, employers, small businesses like grocery stores, even schools, in their localities,” the report read.

Pointing out the alleged involvement of authorities in the attack, the report claimed that during their research, PUCL observed in the chain of events in every case, that the police colluded with these groups. “With the overt guidance of the local leaders of BJP, RSS, Bajrang Dal, Hindu Jagran Vedike, and Banjara Nigama, the police actively work to criminalize the lives of Christians and stop them from organizing prayer meetings. This complicit role of the police emboldens a culture of intolerance and bigotry. Through the complicity, the police have become an arm of social segregation strengthening of such Hindutva forces,” it added.

The report cited a case study of an attack that took place on September 19 to highlight this issue. “I was organising weekly prayers for 8 months in the same prayer hall for 15 believers. One such Sunday, 200 people came to our prayer hall and started raising slogans against Christianity… Within five minutes of the mob’s verbal abuse and shouting, the police came. Perhaps they were nearby because they knew that this was happening,” the report quoted pastor Jim, who was attacked during the incident.

“The police detained 4 of us at the station till 8 PM before giving any of us any information. They filed a complaint against me, a woman, her husband and their son under 295A, but refused to file our complaint against the Hindutva mob that was abusing us verbally. Our lawyer came to the police station at 5 PM but the police refused to file our complaint even after he spoke to them. They told us that the Sub-Inspector has instructed them to not file any complaint on behalf of us. We were in jail for 3 days,” pastor Jim added in this statement.

Responding to the report Karnataka police chief DG and IGP Praveen Sood denied the allegations. “We have been impartial in taking action against anyone who is indulged in such activities, irrespective of religion and caste. As reported by the media itself, there has been a considerable number of FIRs registered and people have been arrested. We have taken action,” he said Sood.

The document added that as per the 2011 Census, Christians accounted for 1.87% of the population in Karnataka. “Thus, the statistics do nothing to suggest that the Christian population is increasing,” the report said.

The report pointed out that Karnataka chief minister Basavaraj Bommai has publicly spoken about his plan to table an anti-conversion Bill in the Assembly. “Evidently, without an increased population, there is nothing to substantiate the claim of forced mass conversions. At the very outset, these numbers are proof that forced mass conversion is a myth, a bogey that is being used to criminalize the practice of faith by Christians.”

Responding to the allegations against increasing attacks on the Christians in the state and the anti-conversion bill, Karnataka home minister Araga Jnanendra said the government is not targeting any particular community “We are bringing it within the framework of the law. It is there in Article 25 of the Constitution that there cannot be forced conversions but there was no penal clause if such conversions take place,” said Jnanendra.

“We are bringing punishment, penalty provisions (for forced conversions). One who wants to convert should submit an application two months prior to the Deputy Commissioner. The person performing the conversion will also have to apply. Those who are converting will have to lose the religion of their origin and facilities or benefits attached with it,” he added.

Meanwhile, KPCC president DK Shivakumar called the attacks and the anti-conversion bill a political tactic of the BJP. “It is a political game from BJP, and we will oppose it. More than anything, I’m worried about its impact. Karnataka is an investment corridor. The entire world is looking at Karnataka and Bangalore. If such attacks continue, investments in the state will reduce. The government is not taking all sections of the society into confidence,” said Shivakumar.

The two musical towers of Bangalore

Rahul Gandhi hits out at govt for disallowing motion on Ladakh...