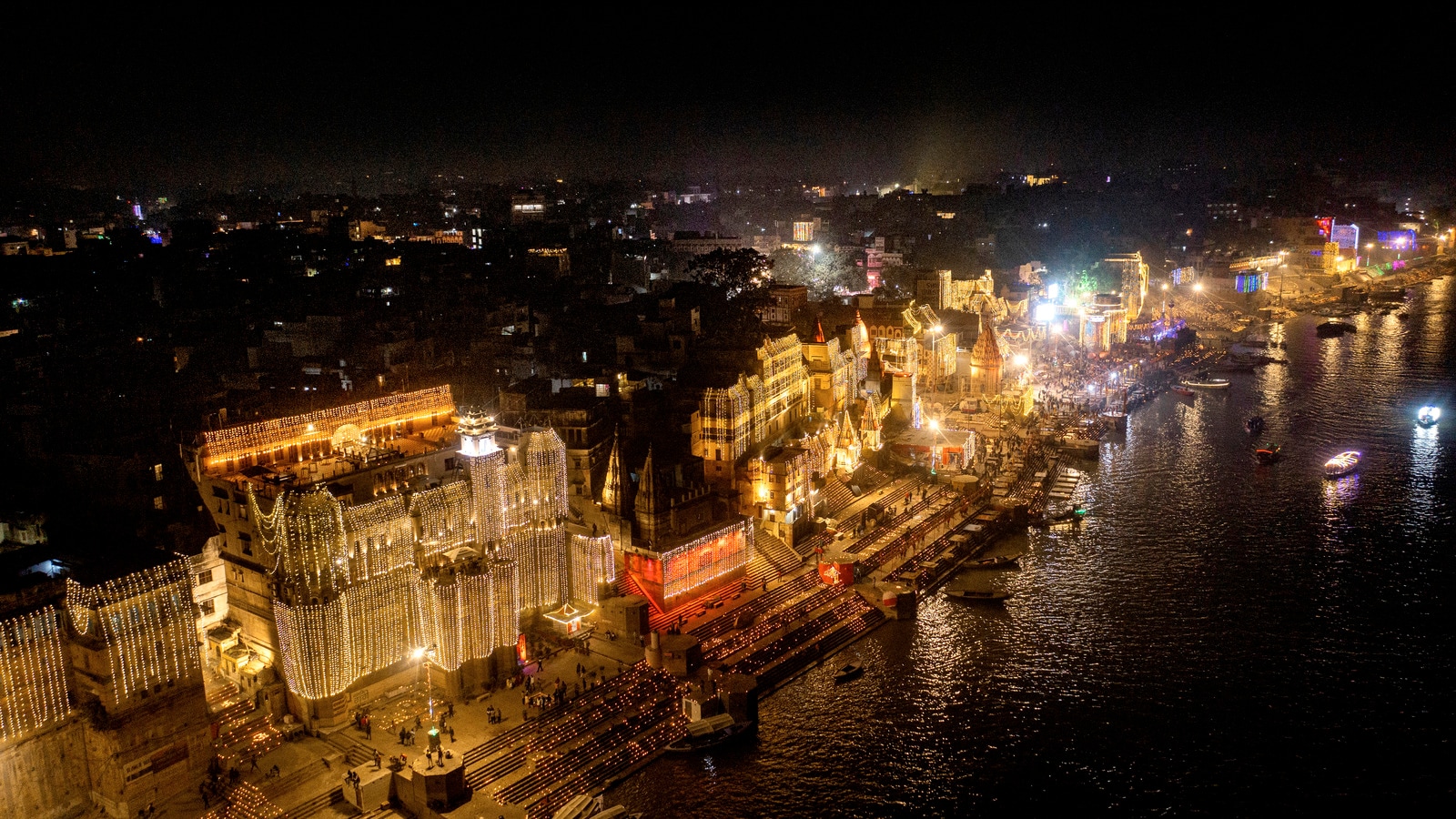 The party’s campaign will also showcase the redevelopment project in Varanasi as a “model of development” that can be replicated pan-India.

“He [PM] has shown through the mandir model that both ideological commitments and development can go hand-in-hand,” explained a senior party leader involved in the electioneering process of the most populous and politically significant state.

The redeveloped corridor worth ₹339 crore was inaugurated by Prime Minister Modi — who represents Varanasi in the Lok Sabha — on December 13.

The corridor that connects the ghats of the River Ganga with the sanctum sanctorum of the Kashi Vishwanath temple, has been designed to allow ease movement of pilgrims who had to hitherto navigate congested and unclean alleys. The foundation stone for the project was laid in 2019 and work carried out in record time despite the slowdowns imposed by the Covid pandemic. The project faced initial hiccups when people whose houses and property along the corridor was acquired for the development project resisted the move.

The Prime Minister had explained the contours of the “mandir model” while inaugurating the corridor by referring to it as a “symbol of India’s antiquity, traditions, energy and dynamism”.

“At the Vishwanath Dham complex, we can see a glimpse of how antiquity and novelty are coming alive together, how the inspirations of the ancient are giving direction to the future,” he said. He also underlined the coexistence of heritage with development as embodied by the project. “ …The new India is proud of its culture and also has confidence in its ability…there is Virasat (heritage) and Vikas(development) in the new India.”

Following his cue, the party rank and file asserts that the development of religious places, particularly Hindu temples, should not be viewed through the prism of religion or as majoritarian appeasement, even as they see it in line with the party’s core ideology.

“People who did not want the redevelopment to take place spread canards that the government is razing houses with ancient temples and that temples are being brought down but the truth is that as many as 40 ancient temples and idols have been preserved that were either encroached upon or neglected,” said the functionary quoted above. He went on to explain that the project “promises employment and a boost to economy that will impact all castes and faiths”.

To the Opposition’s charge that the corridor was planned and executed with an eye on the Hindu vote bank, minister in UP government Shrikant Sharma said, “For us, it was an issue of sanskritik rashtravad (cultural nationalism). It is a classic example of how development and commitment to ideology have been balanced.”

Sharma, who is also a legislator from Mathura where the clamour for the building of a grand temple for Lord Krishna has gained momentum, said the PM’s first five years in office saw him accelerate development projects, which still continues but there is no dithering on issues of ideological relevance.

“Work has been done on every front whether it is electrifying villages, building houses for the poor or improving health and education parameters but at the same time there has been no compromise with our ideology. There was a time when our opponents used to say there will be no one left to carry the Tricolour in Kashmir, today we see the national flag flying atop institutions and schools in the Valley,” he said.

The Kashi redevelopment has also shifted the spotlight on the demand for building temples in Mathura and Varanasi. In 2020 the Akhil Bharatiya Akhada Parishad (ABAP), an apex body of 14 akhadas or organisations of seers, passed a resolution to “liberate Kashi and Mathura” by removing the Gyan Vapi mosque in Varanasi and the Shahi Idgah in Mathura.

Following the completion of the Kashi project, senior party leaders including the deputy chief minister Keshav Prasad Maurya made a pitch for development of these places, which was seen as an effort to assuage the core support groups of RSS-BJP that were miffed at the government not taking up the issue.

“There is a perception that the grievances of the Hindus about the Gyan Vapi and Shahi Idgah have remained unaddressed for long. The PM’s efforts reinforce the party is pratibadh (committed) to justice for all,” said a second functionary.

Last month, BJP lawmaker Harnath Yadav raised the demand for the repeal of the Places of Worship (Special Provisions), Act 1991, stating that the provisions of the law were “unconstitutional, violate the tenets of equality; and secularism, which is part of the preamble.” He said that the law cannot be challenged in court which “clearly means that legal sanctity has been given by the government to the forceful occupation of the Krishna Janmabhoomi and other religious places by foreign invaders”.

Allowing the Kashi project to dominate the election narrative is seen by the opposition as a diversion from issues of governance. Bahuj Samaj Party’s Sudhindra Bhadoria said the project cannot be delinked from religious polarisation or electoral gains. “The timing of the unveiling is just before the elections; the issues that they are raising have religious undertones. The BJP feels it is easier to mobilise people on religious issues and their objective is to polarise the electorate,” he said.

Professor of sociology at Jawaharlal Nehru University, SS Jodhka said since there is not much to boast of in terms of employment and economy, the BJP is steering the narrative towards religious issues.

“Since they are in power, they have to be answerable. Focusing on religious issues is an effective distraction to cover their deficiencies in the socio-economic spheres. It is well-known that Hindutva is the core agenda, the stated agenda of the BJP and they mobilise the Hindu sentiment,” he said.

He said the construction of the Ram Temple in Ayodhya has also given the party’s propensity towards ideology a boost. ”After the progress that they made in the Ram Temple issue they have tried to keep the narrative centred around Hinduism. They talk about development, but that is secondary. It is an ideology-driven party that supports the idea of a Hindu Rashtra and aggressive mobilisation of Hindu sentiment for that,” he said.

Video: Moment where Yogi, Akhilesh Yadav greeted each other with a...

Rahul Gandhi to participate in Padyatra in Amethi