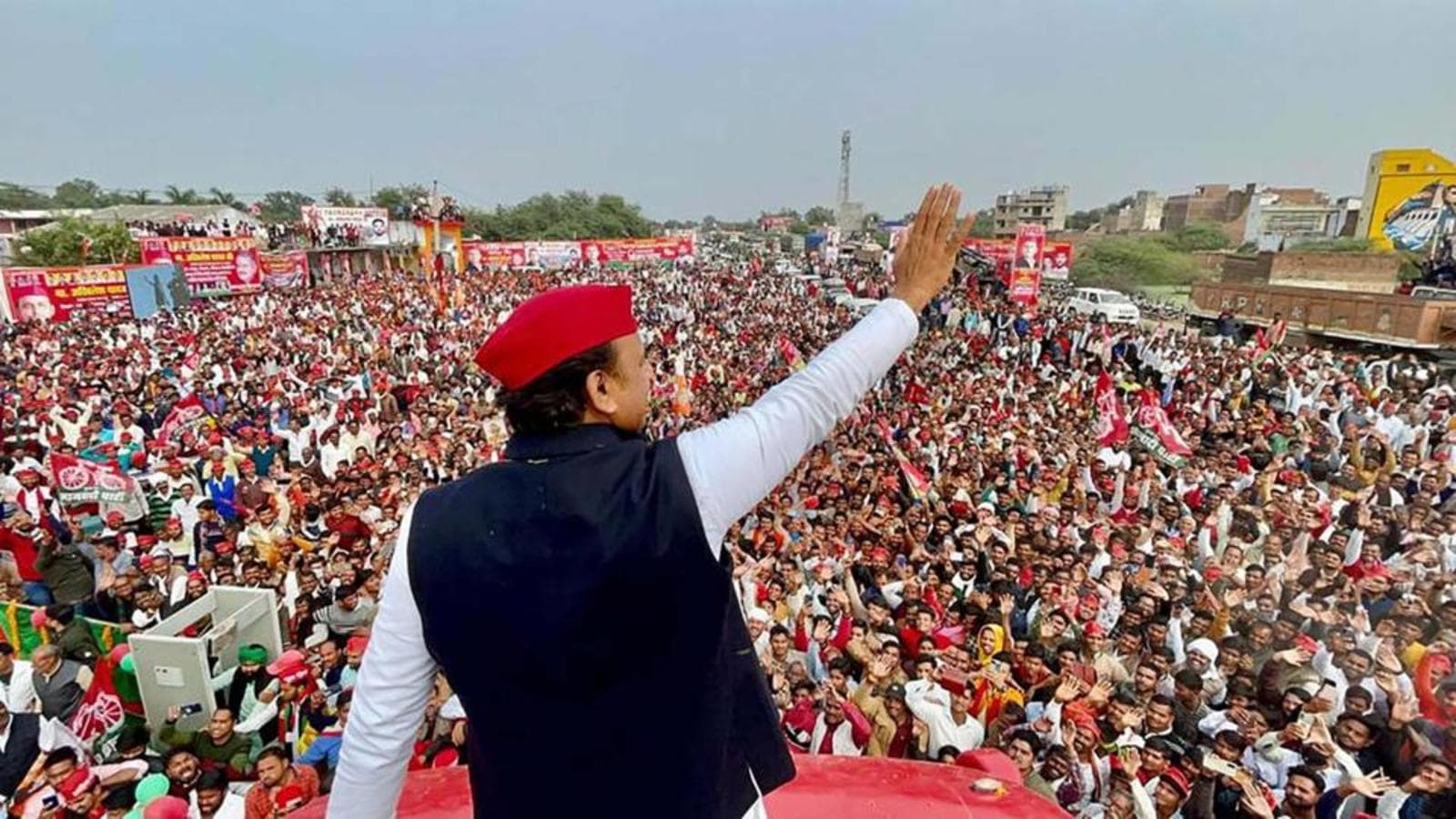 A political observer in Varanasi said the topic of charcha (discussion) at every chaupal (square) today is “lal topi”( red cap), to which Prime Minister Narendra Modi gave the new nomenclature “red alert” at a rally in Gorakhpur on December 7.

Modi made a stinging jibe at the Samajwadi Party amid fluttering saffron flags and banners, cautioning the masses against those wearing red caps as their struggle was for cars with red beacons (power) rather than alleviating the suffering of the people.

He spoke in east UP and provided an equally sharp response from the western part of the state, where Samajwadi Party (SP) national president Akhilesh Yadav was addressing a rally with his alliance partner Rashtriya Lok Dal national president Jayant Chaudhary. Though Yadav wore a bright red cap, the venue was filled with flags of different hues— green, white and red.

He declared, “Now the red caps will oust the BJP from UP.”

In a press statement, the next day (December 8), he said, “The BJP which claims to be the only saviour of Indian culture should know that Hanuman and the sun are red. It’s the colour of change, the colour of blood. But those who wear black caps will never understand it as they have a narrow vision.”

His reference is to the caps sported by members of the Rashtriya Swayamsevak Sangh, the ideological parent of the BJP. Modi was once an RSS worker.

The battle lines are drawn.

Deepak Mishra, who has written books on many socialist leaders and is associated with Akhilesh Yadav’s estranged uncle Shivpal Singh Yadav, said, “It’s an old ideological battle between Vampanthi (Left-wing) and Dakshinpanthi (Right-wing). Let’s go back to history. Even Chandrashekhar Azad and Bhagat Singh wore red caps in the 1920s.”

Though the Prime Minister was politically judicious and sought to disconnect stalwarts such as Ram Manohar Lohia and Jayaprakash Narayan from the modern Samajwadi Party led by Yadav, Mishra asks: “How can you dissociate the red cap, which symbolises an ideology from the great socialist stalwart?”

To be sure, Lohia himself never wore the cap, although workers started wearing it in his time.

Communist leader Atul Anjan explains, “The red cap has always been associated with the left ideology and socialism. It is a symbol of revolution, evolution, struggle and change.”

He quoted a couplet he had written in the 1960s when leaders sporting caps of various hues used to occupy seats in Parliament.

He said Raj Narain used to wear the red cap but, when he merged the Socialist Party with the Lok Dal of Charan Singh, started sporting a green scarf.

A professor from Varanasi recalled the history of the red cap. “When Dr Ram Manohar Lohia formed the Samyuka Socialist Party in 1956, they chose red flag and red topi as the symbols of their party identity. Later in November 1992, Mulayam Singh Yadav formed the Samajwadi Party and carried their legacy forward. He chose a red-green flag and red cap. This has become the identity of the new SP under Akhilesh Yadav as it is a continuation of the same ideology,” he said, requesting anonymity.

The red caps have become more visible after Akhilesh Yadav took charge in 2017. He never appeared in public functions, rallies or even photographs without his precious red cap. Soon, volunteers followed suit and today, almost everyone sports one. The founder president of the party Mulayam Singh Yadav himself used to wear the red cap occasionally, but now he adorns it at every public appearance.

Former SP minister Akhilesh Mishra says, “The red cap is our identity as well as that of change. After all, globally as well as politically, the red colour is associated with struggle, change and evolution. It’s also a red light to the BJP now.”

Perhaps, in a lighter vein, another SP leader said it is a “red rag to the BJP.”

Interestingly till 1948, leaders of all hues and shades used to wear white caps. Later, as more parties emerged, so did caps of other colours. Socialist Ram Sewak Yadav, who was an MP from Barabanki in Uttar Pradesh from 1957 to 1967 wore a red cap in Parliament. Narain Dutt Tiwari preferred off-white as he came from the Praja Socialist Party; the BJP went for saffron scarves and hairbands during the temple movement; and the farmers’ unions preferred green and white caps.

But this is not the first time the red caps of the SP have come under attack. In February 2021, while addressing the state assembly, chief minister Yogi Adityanath narrated an anecdote associating the red cap with goons. He suggested senior SP leaders stop wearing red caps and sport a “safa” ( type of turban) instead.

The Samajwadi Party has sought to paint saffron (the BJP’s colour) as a symbol of divisive politics. Addressing a rally on November 19 on the Purvanchal Expressway, Akhilesh Yadav said, “I can see different colours of flags – red, blue, yellow and green. It is a rainbow of colours symbolizing development and harmony. The BJP is a one-colour party and pursues divisive politics.”

Senior BJP leader Chandra Mohan said the Prime Minister’s message is clear: the new brigade led by Akhilesh Yadav has moved away from the ideology of Ram Manohar Lohia and Jayaprakash Narayan. SP volunteers use them to create panic on streets with their lawless behaviour, he added.