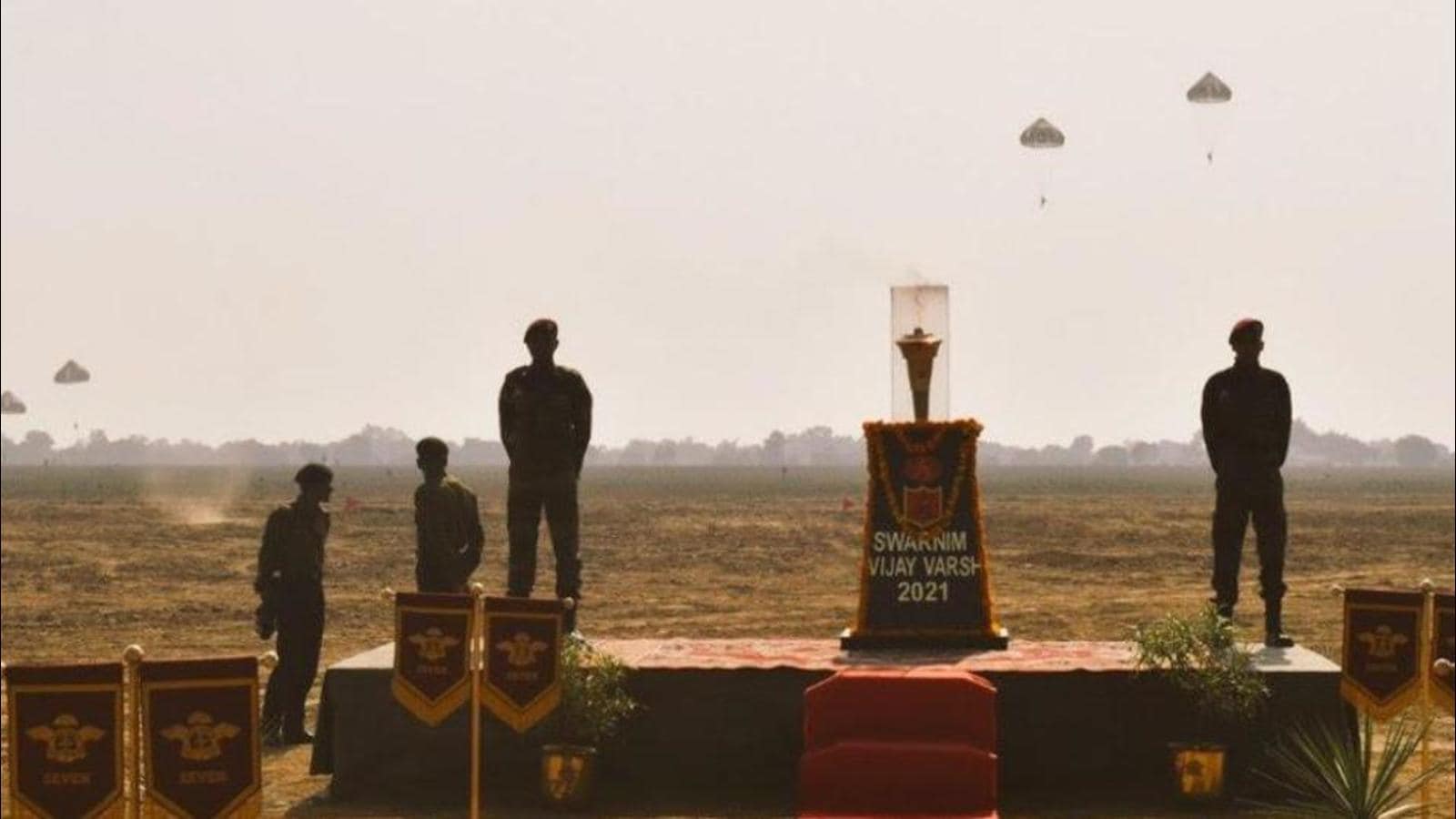 A top general of the Indian Army on Saturday led a mass parachute jump at a premier base in Agra to mark 50 years of the historic battalion-sized Tangail airdrop north of Dhaka during the 1971 war with Pakistan, a critical operation that set the stage for surrender by the rival army, officials familiar with the development said.

The Tangail airdrop is the biggest airborne operation ever mounted by Indian paratroopers.

The army and the air force dedicated the parachute jump at Agra to India’s first chief of defence staff General Bipin Rawat and the 12 other braves killed in the horrific Mi-17V5 crash near Coonoor on December 8.

“General Rawat envisioned jointmanship amongst the services to touch the highest standards of integration and execution. The parachute jump was marked by precise coordination between the army and air force in the best spirit of jointmanship,” the Indian Army said in a statement.

Rawat, his wife Madhulika Raje Singh Rawat and the CDS’s defence assistant Brigadier LS Lidder were on Friday cremated with military honours at Brar Square in Delhi Cantt in two separate solemn ceremonies steeped in military tradition, with top government officials attending the heart-wrenching final send-off and thousands of men, women and children lining the road leading to the crematorium to pay their last respects and raising slogans of glory for the departed

The aim of the Tangail operation was to capture the Poongli Bridge on Jamalpur-Tangail-Dhaka road and the ferry site on Louhajang River to intercept Pakistan army’s 93 Brigade that was retreating from the north to defend Dhaka, the officials said.

Around 750 men of the 2nd Battalion of the Parachute Regiment were involved in the successful mission. The paratroopers defeated a force that was three times numerically superior and shattered the will of the Pakistani army to defend Dhaka.

Several veterans who took part in the Tangail airdrop and the subsequent operations in Bangladesh witnessed the commemoration of the landmark event at Agra. Lieutenant General Nirbhay Sharma, who was the adjutant of 2 Para during the 1971 war, was among those present.

The Shatrujeet airborne brigade, consisting of the army’s finest paratroopers and based at Agra, was the centrepiece of high-altitude combat manoeuvres carried out by the army and the air force in the Ladakh sector in early November.

The airborne drills in eastern Ladakh aimed to validate and showcase the Indian military’s rapid response capabilities, including inter-theatre movement of troops and equipment, precision stand-off drops, rapid grouping and ability to capture designated targets with speed and surprise at a time when India and China are locked in a standoff along the Line of Actual Control (LAC) in the sensitive sector.

Other elements of the exercise include integrated battle drills by airborne forces, mechanised columns and attack helicopters.