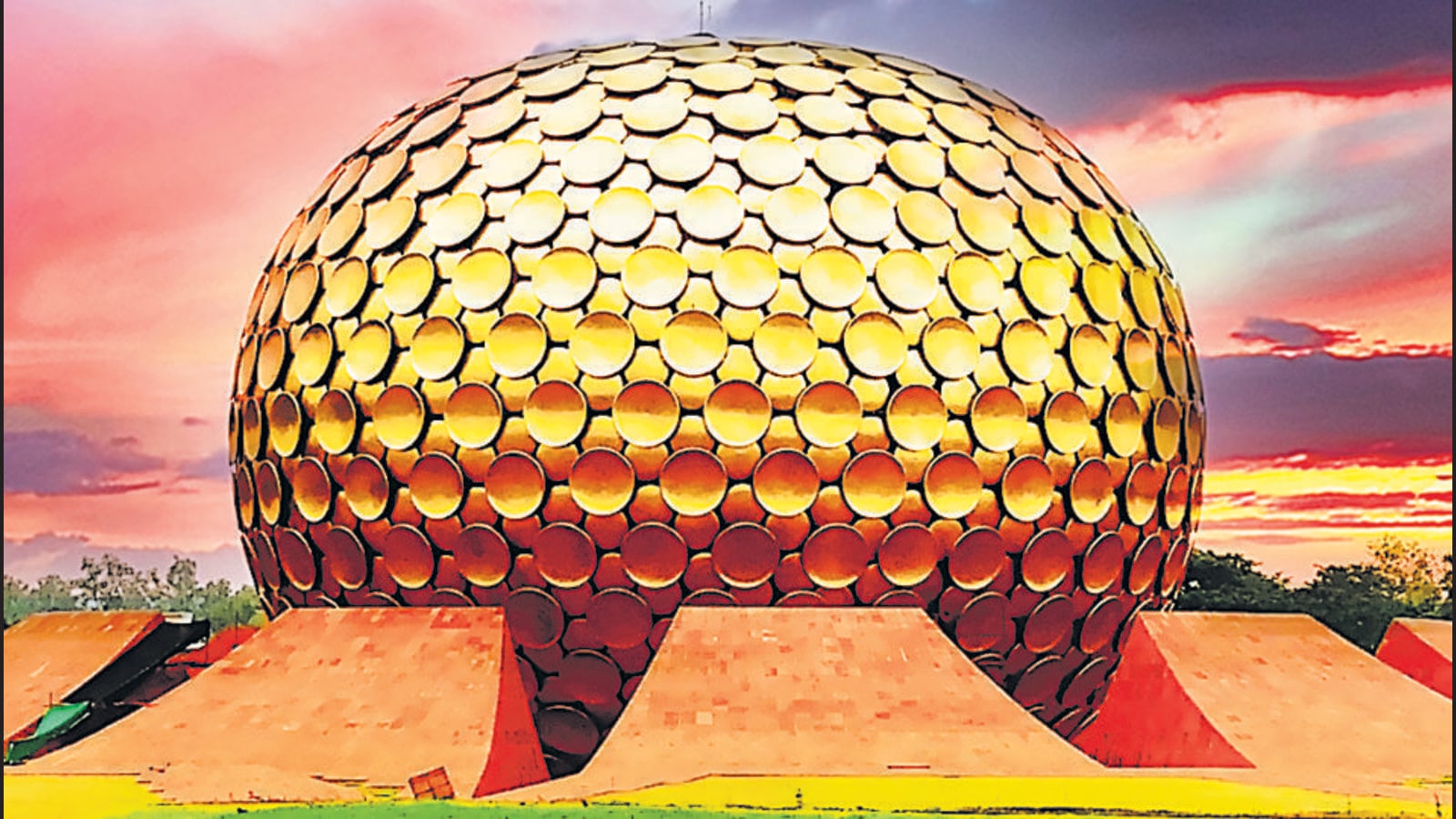 There is a disorder at tranquil experimental township of Auroville, which lies in Puducherry and Tamil Nadu’s Villupuram district, with residents protesting against the Auroville Foundation clearing their building and trees to implement a ring road project called Crown Road.

On December 9, Auroville residents stood around a JCB in Darkali forest and began chanting “Om” which they described as a way of bringing calm amid the chaos. The entire community has been shaken up with events in the past week saying they were attacked when they tried to stop JCBs and visuals show that there has been violence.

On Friday, they got a temporary relief with the National Green Tribunal (NGT) granting an interim stay on the road project till December 17.

The Crown Road project is 4.4 km long for which trees under the definition of “Deemed Forest” and Auroville’s Youth Centre which is near the iconic Matrimandir have to go. The Auroville residents say they aren’t against the project but rather want a consensus to find a way to develop the project without disrupting its environments such as the water paths.

Meetings to discuss the Crown Road project have been going on for a few months between the Residents Assembly, which includes all Aurovillians about 3,500 of them, and Auroville Foundation, an autonomous body established in 1988 under the administrative control of the ministry of human resource development.

But, the trouble began, Auroville residents say, when they were caught by surprise on the morning of December 4, when a JCB arrived without prior warning and began to clear sections of the forest two days earlier than scheduled. They protested and the JCB went back. “This itself was a shock. In Auroville, we normally resolve contentious issues through dialogue,” said a resident of 18 years who didn’t wish to be identified.

But it got worse. In the intervening night of 4-5 December around 1 am there was an unexpected and dramatic midnight bulldozing of the forest next to the Youth Centre, said a statement from the Residents Assembly. “The youth living here were not notified and were shocked at the late night presence of JCB’s next to their house, flanked by 200 police, cordoning off the area and acting with aggression,” the statement said.

A foreign resident, who has been in Auroville since its inception, said they were intimidated by police. “They asked if we had valid visas. Threatened to take our passports and some even said go back to your country,” the resident said wishing not to be identified. “Everything that is happening is against the very ideals of Auroville.” The residents say they were beaten, their phones were taken away and children were also rounded up.

The following day, on December 6, the government appointed secretariat of the Auroville Foundation gave an ultimatum stating that if residents did not agree before 7am the next morning to dismantle the buildings in the Youth Centre themselves, then it would be done by force, the Residents Assembly statement said. “Feeling pressurised and with violence fresh in people’s hearts, the residents did not have time to call for a community-wide consultation. A small group of Aurovilians had a meeting with the Secretariat and a compromise was drafted.” The residents said they arrived at a painful decision of dismantling the buildings of the Youth Centre by themselves.

But on December 9, there was another kerfuffle when the residents tried to stop a JCB near the Youth Centre and locals who are non-Aurovillians can be seen pushing the residents in visuals. “We could tell they weren’t from our surroundings because we have a good relationship with people in villages adjacent to Auroville,” said one of the residents quoted above.

They painfully expressed that some of the first Aurovilians watched a 50-year-old tree and their Youth Centre being brought down. A resident, Divya, wrote a scathing letter addressed to the Foundation’s members. “Today I climbed on top of the JCB which was working at the YC, and asked the driver to stop the machine. The driver was scared, he would have stopped. But 20 goondas surrounding the JCB, lifted me off and carried me away. Of course, in the process, I got hurt physically, but that is not the point,” she said. “Human Unity will not be built by bringing police or goondas from villages. Neither will the city be built this way.”

The Foundation responded that under The Mother’s direct guidance a plan for the Auroville Township plan was prepared known as the Galaxy Plan. It was presented along with the Charter of Auroville during the inauguration of Auroville on February 28, 1968. Residents of Auroville formulated a Master Plan in 1999 based on the Galaxy Plan, which was unanimously approved by the Residents Assembly and sent to the Governing Board for approval.

The Governing Board referred the plan to the Town and Country Planning Organisation of the Ministry of Housing and Urban Development (GoI) for a review which resulted in the Auroville Universal Township Master Plan (perspective 2025), which was approved by the Governing Board and the Ministry of HRD in April 2001 and was notified in part 3 of the Gazette of India on August 16, 2010. “The Auroville Master Plan provides for a population of 50,000 residents by 2025. The present population of Auroville is only about 3,500,” the foundation’s statement said.

Responding to the events on December 4, the foundation said abusive language and several other aggressive moves such as spitting, shouting etc. was used against the team at work. “Work was stopped, and resumed in the night, after cordoning off some of the entry routes, hoping that this would help to bring less people to stop the work and put themselves and others in physical danger,” Foundation spokesperson Sindhuja Jagadeesh said. On December 9, the Foundation said they were at the site with 3 JCBs, since work of clearing, the Youth Center should have done in the days prior when it was agreed residents would demolish it.

Auroville residents have a brief relief for a week. One of the residents, Navroz Kersasp Mody, moved the southern bench of the NGT to protect the forest and on Friday the tribunal granted interim stay against tree felling in Auroville. The matter has been posted to 17 December and the NGT directed the Auroville Foundation to file a response against the allegations.

The learned counsel appearing for Tamil Nadu submitted that the state government has no interest in this matter. Though part of the area falls within Tamil Nadu but the area where activities are going on is exclusively in the possession of the Auroville Foundation and high dignitaries are at the helm of affairs of the administration of the Foundation, the NGT order read.

‘Will not contest any elections’, says BKU leader Rakesh Tikait as...

Channi: Will file defamation case against Kejriwal over post on ED...