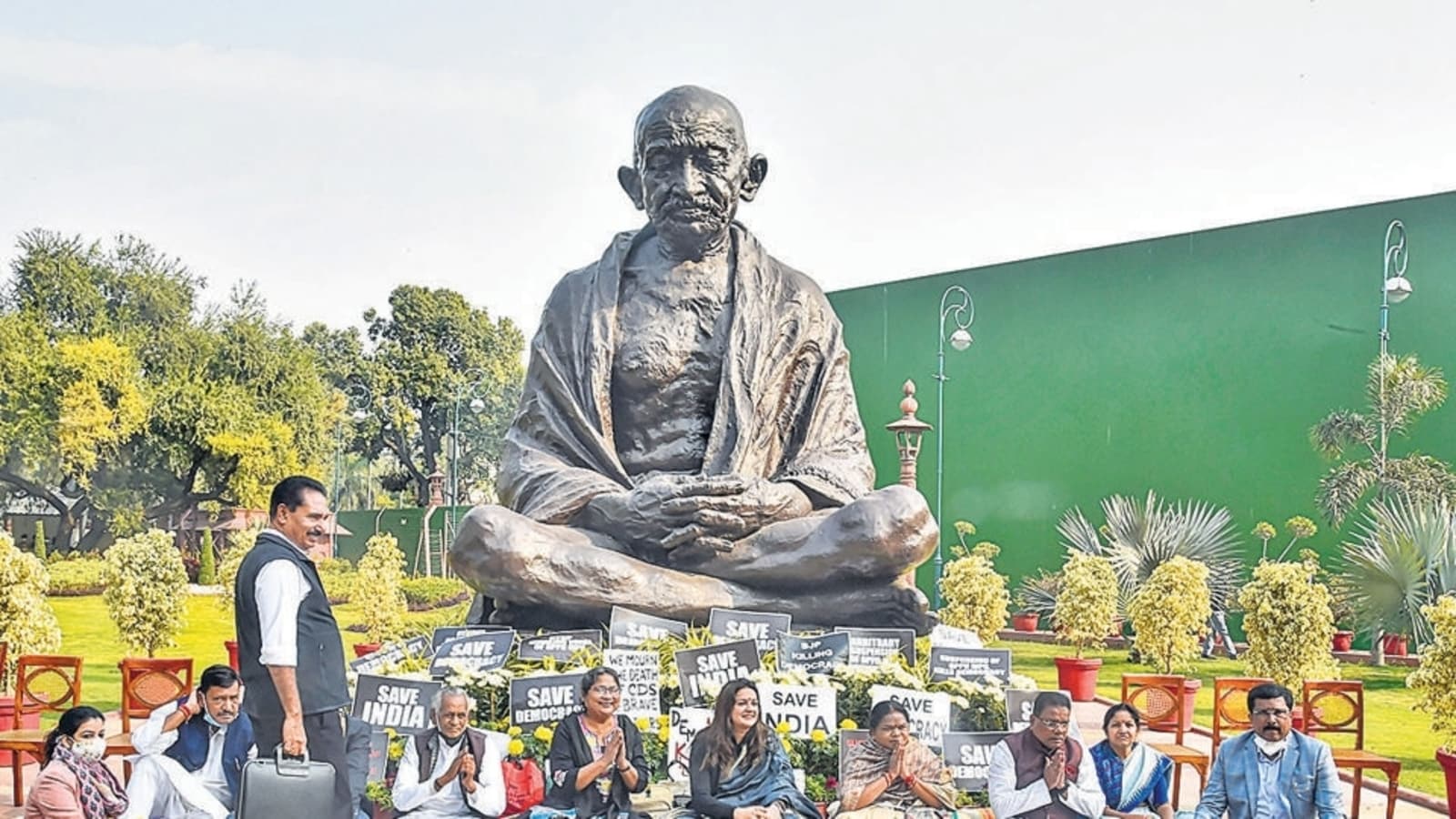 More than 18 Opposition parties have planned a march from Parliament to Vijay Chowk to protest against the suspension of 12 lawmakers from the Rajya Sabha — an issue that has already triggered daily protests inside and outside the Upper House since past two weeks.

The march, to be joined by Opposition leaders of both the Lok Sabha and the Rajya Sabha, will be held on Tuesday noon. Leader of the Opposition Mallikarjun Kharge told HT that protests will continue through different forms of Satyagraha. “We have to fight it. We have to tell the people why our people were suspended and how wrongly they have been kept out of the House. Our fight will continue and find other methods like a march or asking all political parties addressing to the press. We will continue our protests through different forms of Satyagraha,” he said.

Trinamool leader Dola Sen, one of the 12 suspended MPs protesting daily in front of the Gandhi statue, said, “We have been suspended as we wanted to raise people’s issues. In the last session, Opposition MPs were suspended three times. Yet, the government dragged the last session’s incidents to this session to stop us again from speaking in the House.”

While the Lok Sabha worked smoothly on Monday, Congress MPs walked out of the Rajya Sabha protesting against the continued standoff over the suspensions. Kharge said the government has not conceded to their demand to revisit the suspension.

Speaking in the House, Kharge said the Opposition has repeatedly requested the chair to reconsider the suspension of MPs accused of disrupting the proceedings on the last day of the monsoon session.

“You are the custodian of this house, the government cannot dictate what we should do or not do. Our deputy leader has already spoken to you and also to the leader of the house but they are repeatedly refusing to concede our request. They are putting blame on us…it is not good therefore,” he said.

Later in the day, he wrote to the Chairman of the House, requesting him to withdraw external security forces that are posted in the lobbies, referring to the alleged harassment of opposition lawmakers during the monsoon session.

In his letter, reviewed by HT, Kharge cited the August 11 incident wherein Opposition MPs were allegedly attacked and harassed by Delhi Police personnel. “These people were unknown to the members and that became the primary cause of suspicion, which led to unruly scenes..,” he said.

Earlier, Anand Sharma of the Congress and Dravida Munnetra Kazhagam’s (DMK) Tiruchi Siva urged the chair to revisit the action taken against the suspended MPs. CPI MP Binoy Viswam later told HT, “We are contemplating various ways of protests. We have also sought permission for a demonstration at Jantar Mantar.”

Ludhiana court blast: Man killed might have been carrying the bomb,...

CISF to set up panel at airports for issues relating to...