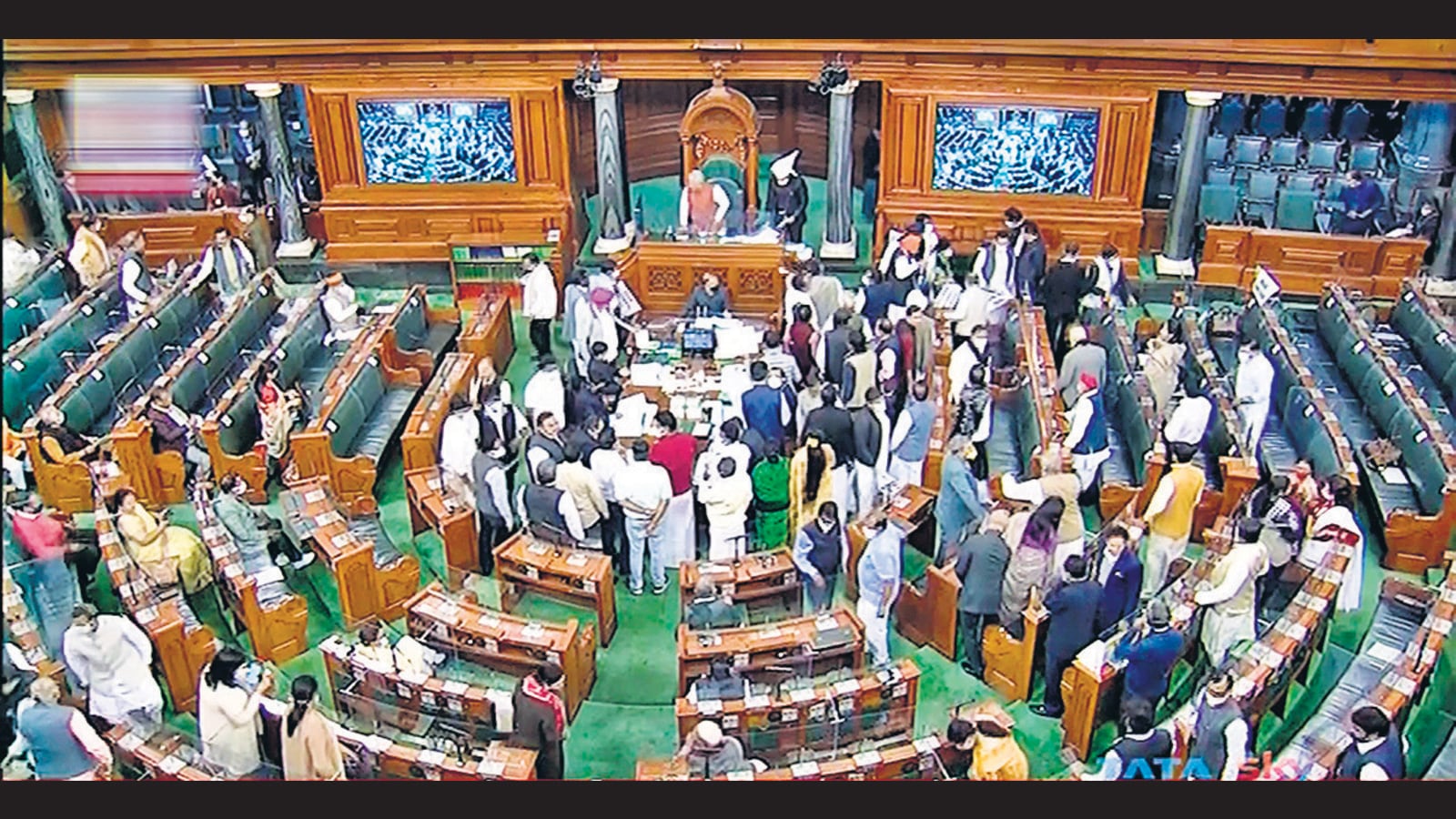 Opposition parties launched a massive protest in the Lok Sabha on Wednesday, demanding the removal of Union minister of state for home Ajay Mishra ‘Teni’ after investigators said his son Ashish Mishra and others mowed down farmers in Lakhimpur Kheri in a “deliberate, pre-planned conspiracy”

In the Rajya Sabha, the Opposition continued to protest against the suspension of 12 lawmakers.

The disruptions paused the debate on the Omicron variant in the Upper House and delayed the passage of supplementary demand for grants and debates on climate change and price rise in the Lok Sabha. An angry Bharatiya Janata Party leader, Shiv Pratap Shukla, compared protesting MPs with Omicron and called them a ”threat to democracy”.

On Wednesday morning, former Congress president Rahul Gandhi along with several Opposition members moved an adjournment motion demanding the removal of Ajay Mishra and a discussion on the special investigation team report on the October 3 Lakhimpur Kheri violence. The Lower House of Parliament was adjourned twice as Opposition parties continued their massive protests.

”They are not allowing us to speak, that’s why the house is being disrupted. Their minister is involved in it (Lakhimpur Kheri incident), at least there should be a discussion on the judgment. So at least a discussion should be allowed, but they don’t want to discuss it,” Gandhi told reporters outside Parliament.

Congress’s Lok Sabha chief whip K Suresh moved an adjournment motion demanding Mishra should “step down immediately so that a fair investigation is carried out and justice is served and culprits are brought to book and farmers are delivered justice.”

Opposition parties shouted slogans against the government and disrupted the functioning of the Lower House during Question Hour. Some members even entered the Well of the House and shouted slogans.

Leader of the Rajya Sabha and Union minister Piyush Goyal hit out at the Opposition. “The government is willing to consider their request but they have to apologise for attacking lady marshals and the way they behaved with those who were protecting the security of this house,” he said, referring to unruly scenes in the last session of Parliament.

“How can they expect that they will attack them and then expect to serve this house? People had given up their lives on December 13 (2001) for this sanctum sanctorum only for these members of Parliament and they tried to strangulate them. It is a matter of shame that they are not willing to repent for their actions,” Goyal said.

Leader of the Opposition in the Rajya Sabha, Mallikarjun Kharge, rejected the allegations. ”We (Opposition leaders) have not done anything like that…There were, in fact, no female marshal present in the house during the incident,” he said.

Union minister of parliamentary affairs Pralhad Joshi said that discussion on Omicron was allowed following a request from Opposition leaders. “Even after that they do not want to participate in the discussion. Even in the morning they did not allow Question Hour and Zero Hour. In spite of that, we are requesting them and appealing to them to participate in this important discussion,” he said.

On Tuesday, a court in Uttar Pradesh added stringent sections of the Indian Penal Code and Arms Act, including attempt to murder, to the First Information Report (FIR) against 13 people accused of mowing down farmers in Lakhimpur Kheri, where eight people were killed on October 3. The SIT told the court that the farmers were killed in a “well planned and a deliberate act, not an act of negligence and callousness”.

Four farmers and a journalist died when an SUV owned by Ajay Mishra ran over farmers from behind in Lakhimpur Kheri on October 3. In the ensuing violence, three more people — two of whom were Bharatiya Janata Party (BJP) workers and one was the driver of the car — were killed.

Smriti Irani (who beat Rahul Gandhi in Amethi) in his Kerala...

Bihar: BJP to hold collective waving of 75,000 national flags on...

Explained: A look at West’s toughest sanctions yet on Russia