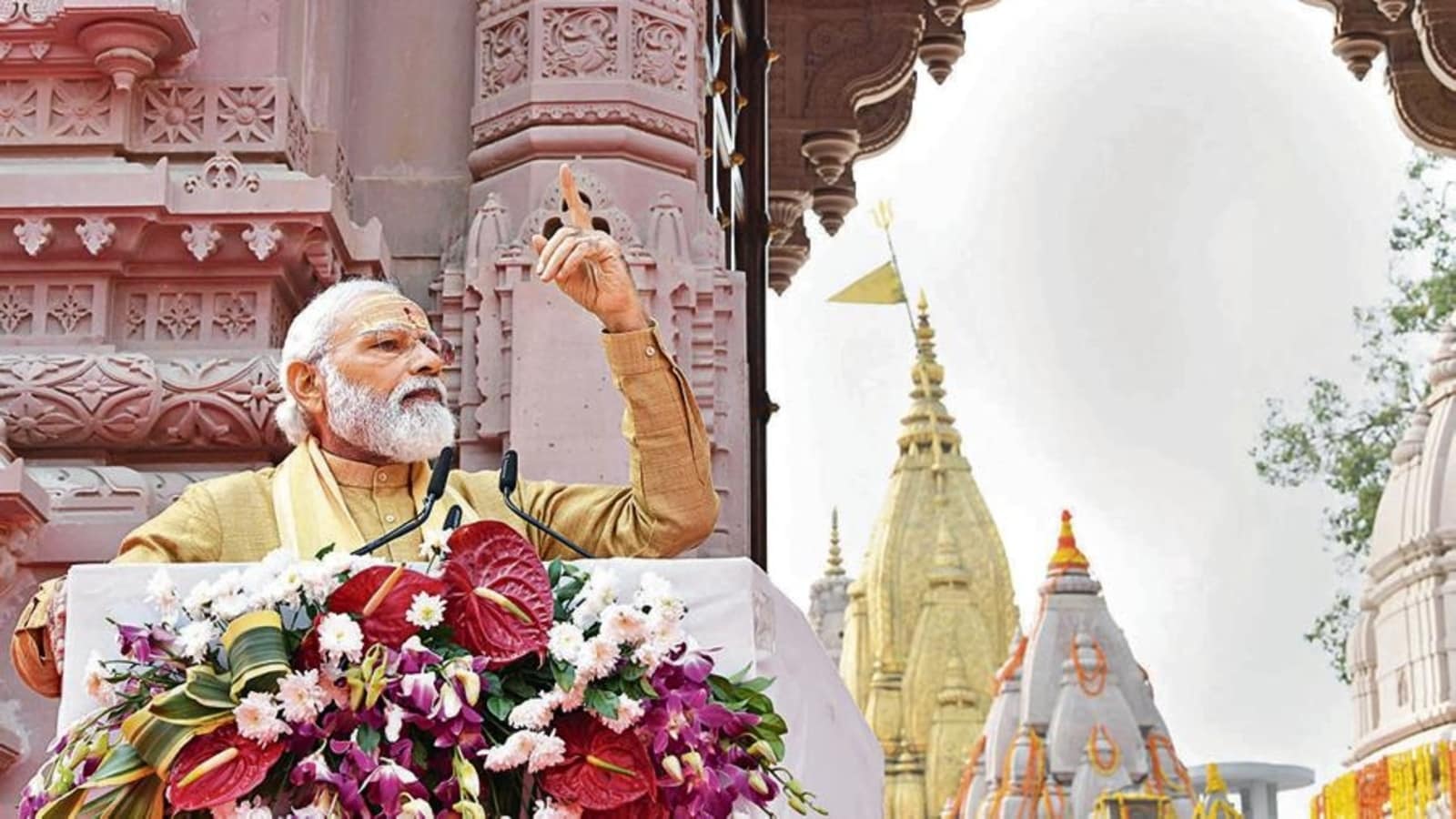 Prime Minister Narendra Modi inaugurated the ₹700 crore Kashi Vishwanath Corridor in Varanasi on Monday, exhorting citizens to take pledges for cleanliness and self-reliance, and saying that a new India took pride in retrieving historical glory while striving for modernity.

Modi reached the mega redevelopment project by boat around noon, took a dip in the Ganga and offered prayers, before carrying holy water across the roughly 500m corridor and dedicating the complex, comprising 24 buildings built over 550,000 square feet, to the nation. In the evening, he watched the Ganga aarti from a boat at Dashashwamedh Ghat.

“This complex is a witness to our capability, of our duty. If it is determined and thought, then nothing is impossible,” he said. “Today history has been created by reviving the sociocultural history of this ancient city, which is vibrant with Hindu philosophy as enshrined in our religious books.”

Addressing a gathering of 3,000 guests, the PM urged Indians to make three resolutions for the sake of the country: Swachhta (cleanliness), Srijan (creation), and continuous efforts for Aatmanirbhar Bharat (self-reliant India).

In a 45-minute speech in his parliamentary constituency, Modi said India was focused on reviving its lost heritage and was stepping out of the “inferiority” complex brought on by centuries of “slavery”.

“Tyrants attacked this city, tried to destroy it. History is witness to Aurangzeb’s atrocities, his terror. He tried to change civilisation with the sword,” he said. “But the soil of this country is different from the rest of the world. Here if an Aurangzeb comes, a Shivaji also rises,” he added, raising the chant of ‘Har Har Mahadev’, associated with Hindu god Shiva.

“If any Salar Masud comes, then brave warriors like King Suheldev make him taste the might of India’s unity. And even during the British era, the people of Kashi knew what happened to Warren Hastings.”

Modi started his visit by offering prayers at the Kaal Bhairav temple. Around 12.15pm, he took a boat to the Lalita Ghat entrance of the corridor, a project on which work began in earnest in 2019.

He then took a dip in the Ganga, collected holy water in a kalash (a metal vessel used in rituals) and walked across the corridor – with devotees playing the damru (a two-headed drum) on either side. The inauguration ceremony was attended by Uttar Pradesh chief minister Yogi Adityanath, Bharatiya Janata Party (BJP) chief JP Nadda, Union ministers Mahendra Nath Pandey and Dharmendra Pradhan, and other dignitaries.

After the ceremony, Modi and Adityanath had lunch with the workers who built the corridor, which aimed to transform the area around the centuries-old temple in Varanasi with state-of-the-art buildings and opening access to the Ganga.

During his two-day visit – which comes months before high-stakes state elections – the PM will also participate in a conclave of chief ministers of Assam, Arunachal Pradesh, Goa, Gujarat, Haryana, Himachal Pradesh, Karnataka, Madhya Pradesh, Manipur, Tripura, Uttar Pradesh and Uttarakhand, along with the deputy CMs of Bihar and Nagaland.

In his speech, Modi called Varanasi “imperishable” and a “class apart”, and took on his political opponents. He said when the corridor was conceived, some people, due to their vested interests and politics, used to say, “How will it happen? It will not happen. Many people like Modi have come and gone.”

“But Kashi is Kashi. Kashi is imperishable,” he added. “There is only one government in Kashi, the government of Mahadev who holds damru in his hand”.

“With blessings of Baba Vishwanath, the grand corridor has been built, and has been dedicated to the nation today. The inauguration of Kashi Vishwanath Dham will give a decisive direction to India, and will lead it to a brighter future. This complex is a witness to our capability, our duty. If it is determined and thought, then nothing is impossible,” Modi said.

Before inaugurating the corridor, Modi greeted workers with flowers and sat with them on the stairs of a platform. Earlier, petals were showered on him on the streets of Varanasi, and the PM accepted a “pagdi” (turban) from a man.

“When you come here, you will not see only faith, you will also feel the glory of your past here — how antiquity and novelty come alive together, how the inspirations of the ancient are giving direction to the future. In Vishwanath Dham complex, all this is visible,” he said.

“This entire new complex of Vishwanath Dham is not just a grand building, this is also a symbol of the sanatan (ancient) culture of India. This is a symbol of our spiritual soul, a symbol of India’s antiquity, traditions, India’s energy and dynamism,” Modi added.

Modi said the complex has been expanded from 3,000 to 500,000 square feet, and between 50,000 and 75,000 devotees could gather at any given time. He credited the workers for finishing the project despite the pandemic.

“Today, I would also like to express my gratitude to every labourer brother and sister, who shed their sweat in the construction of this grand complex and even in times like corona, they did not let the work stop here,” he said. “Along with all this, I also congratulate chief minister Yogi Adityanathji, who worked day and night.”

The PM called cleanliness a way of life and called for the people’s participation in this enterprise, especially in the Namami Gange Mission, which aims to curb pollution and rejuvenate the Ganga.

“The long period of slavery broke our confidence in such a way that we lost faith in our own creation. Today, from this thousand-year-old Kashi, I call upon every countryman — create with confidence and innovate.”

The Opposition attacked the PM. Samajwadi Party chief Akhilesh Yadav taunted him, saying people stay in Varanasi when the end is near. “It is good,” he said when told that Modi was in Varanasi. “Why only a month? He should stay for two months, three months. That is a good place to stay.”

Republic Day celebrations to begin early from January 23 on Netaji’s...

Stranger Things Season 4 trailer: It’s war, and this time with...

Over 41 lakh vehicles in Gujarat to be hit: Purnesh Modi