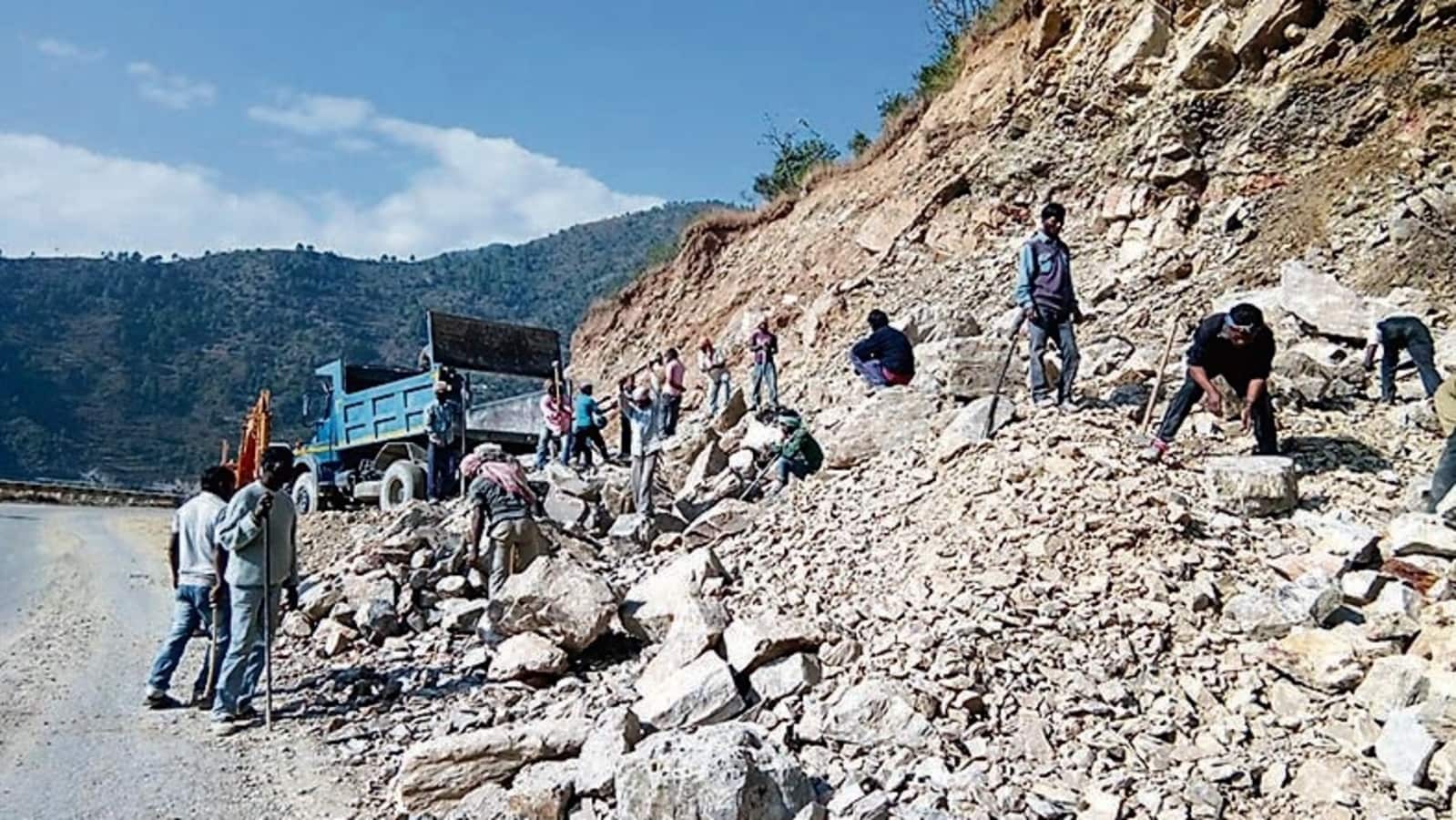 The Supreme Court on Tuesday permitted the Union government to construct all-weather roads with 10m width as part of its Char Dham project in Uttarakhand, underlining that “the recent past has thrown up serious challenges to national security”, and that wide strategic feeder roads to Indo-China border areas were required for the infrastructural needs of the armed forces.

Lifting its September 2020 restraining order against widening of the roads in view of the region’s ecology, the top court held that the considerations governing the construction of highways that are strategic roads from a defence perspective, and may be used by the armed forces of the nation, cannot be the same as those for other roads in hilly and mountainous regions.

“This court, in its exercise of judicial review, cannot second-guess the infrastructural needs of the armed forces… The submission of the appellants requires the court to interrogate the policy choice of the establishment which is entrusted by law with the defence of the nation. This is impermissible,” said a bench led by justice Dhananjaya Y Chandrachud.

It further ruled that the need for the development of national highways of a double lane standard is proportionate to the object of fulfilling the security concerns of the nation, as assessed by the ministry of defence (MoD).

However, the bench, which also included justices Surya Kant and Vikram Nath, clarified that the court’s approval is subject to compliance by authorities with all remedial measures in relation to hill-cutting, and landslides; muck disposal; dust and pollution control; and impact on wildlife and water resources.

The bench said that the recommendations made by the court-mandated high-powered committee (HPC) in July 2020 must be adhered to in order to make the project environmentally sustainable, especially in wake of the fact that “the remedial measures in relation to hill-cutting and landslides have been tardy and limited” so far.

The court set up a three-member oversight committee, to be headed by former Supreme Court judge AK Sikri, that would monitor compliance by authorities with the recommendations made by HPC, and would report on the progress undertaken to it every four months.

Several concerns have been raised about the environmental viability of the Char Dham road project. Environmentalists including members of the Supreme Court constituted high powered committee had last year flagged that the project had made constructions and felled trees based on a conditional stage 1 forest clearance. Geologists have flagged that hill cutting for the project has made the stretches extremely vulnerable to landslides and slope destabilisation.

The bench said on Tuesday that at stake were not just benefits directly to the armed forces but “also the health of the environment, and its effects on all individuals who inhabit the area” and therefore, it was imperative that the road transport ministry and defence ministry be transparent in the measures they adopt, in order for them to be held publicly accountable.

The court was deciding two applications by separate departments of the Centre, MoD and Ministry of Road, Transport and Highways (MoRTH) to modify the September 2020 order, which relied on a 2018 MoRTH circular providing for roads in hilly regions to be 5.5m wide. However, another circular in December 2020 modified it by allowing 7m width, with a 1.5m paved shoulder on either side of the highway, for feeder roads to the Indo-China border.

Through attorney general (AG) KK Venugopal, the Centre stressed on the necessity of developing the feeder roads — Rishikesh to Mana (281km), Rishikesh to Gangotri (231 km) and Tanakpur to Pithoragarh (162 km) — for national security. Given the proximity of the roads to the Indo-China border, the AG, highlighted the necessity of free movement for transport of trucks, machines, equipment and personnel of the Indian Army while seeking a nod for double lane configuration for these roads.

The Centre’s plea was opposed by NGO Citizens for Green Doon, on whose plea the road width was restricted to 5.5m. Senior advocate Colin Gonsalves, appearing for the NGO, argued that the present road infrastructure is sufficient to meet the needs of the Indian Army. Any further development, it was urged, must be balanced keeping in mind the fragility of the Himalayas, the excessive damage caused to the environment and the need to ensure disaster-resilient roads.

The bench, however, allowed the Centre’s plea.

“The allegation that the application filed by the MoD seeks to re-litigate the matter or subvert the previous order of this court are unfounded inasmuch as MoD, as the specialised body of the Government of India, is entitled to decide on the operational requirements of the armed forces. These requirements include infrastructural support needed for facilitating the movement of troops, equipment and machines,” it noted.

The bench added that the bona fides of the MoD are also evident from the fact that the issue of security concerns was raised during the discussions of the HPC and finds mention in the HPC Report. Thus, the MoD has maintained the need for double-laned roads to meet border security concerns.

“The appellants (NGO) would have this court hold that the need of the army will be subserved better by disaster resistant roads of a smaller dimension. The submission of the appellants requires the Court to override the modalities decided upon by the Army and the MoD to safeguard the security of the nation’s borders…This is impermissible,” it noted.

It underscored the need to arrive at a delicate balance of environmental considerations such that they do not impede infrastructural development, specifically in areas of strategic importance crucial to the security of the nation.

“We find that the need for the development of national highways of a DL-PS standard is proportionate to the object of fulfilling the security concerns of the nation as assessed by the MoD. This is reinforced by the fact that the roads beyond the highways in the Project, beyond Gangotri, Mana and Pithoragarh are being developed by the MoD as double laned highways,” held the bench.

It also declined to bind the MoD with a statement made by the then Chief of the Army Staff General Bipin Rawat in 2019 in a media interview regarding the adequacy of infrastructure for troop movement, saying reliance on a media interview would be uncalled for given the consistent stand of the MoD during the deliberations of HPC and before the top court.

“The security concerns as assessed by the MoD may change over time. The recent past has thrown up serious challenges to national security. The armed forces cannot be held down to a statement made during a media interaction in 2019 as if it were a decree writ in stone,” maintained the court.

Experts said the verdict will adversely impact the environmental issues in the region.

“It is very strange that the Supreme Court has given a judgement approving DL-PS road width standard while the MoD in their application had only asked for a double lane. The increase of road-width is directly proportional to the connected impacts. Thus by giving such a verdict the environmental issues have been severely/devastatingly exacerbated,” said Mallika Bhanot, environmentalist and member of Ganga Ahvaan.

“We have already highlighted the concerns with geological instability of the road project. Now since the judgment has come, I will only add that the implementing authorities are conscious and understand the concerns and make a disaster resilient road for our defence personnel which will be very important for our national security,” said Navin Juyal, a retired geologist from the Physical Research Laboratory in Ahmedabad and member of high powered committee on Char Dham road project.

In January this year, the high-powered committee in its report to the SC presented a divided opinion with the majority in favour of the wider roads on the Char Dham route, considering the strategic requirement and snow removal needs.

The majority report also took into account the state government’s focus on reversing the migration in border areas by providing ample livelihood opportunities and ease of transportation, and said that the latest MoRTH circular on wider roads should be accepted.

The majority report added it is not “feasible” to revisit the entire project where work is already completed and reduce the road width from 10 m to 5.5 m, underlining that it was “impractical” to reclaim the already tarred road because it will not be possible to grow trees on the excavated parts.

‘If Modi was sincere’: Owaisi slams Centre for acting like ‘Mohalla...