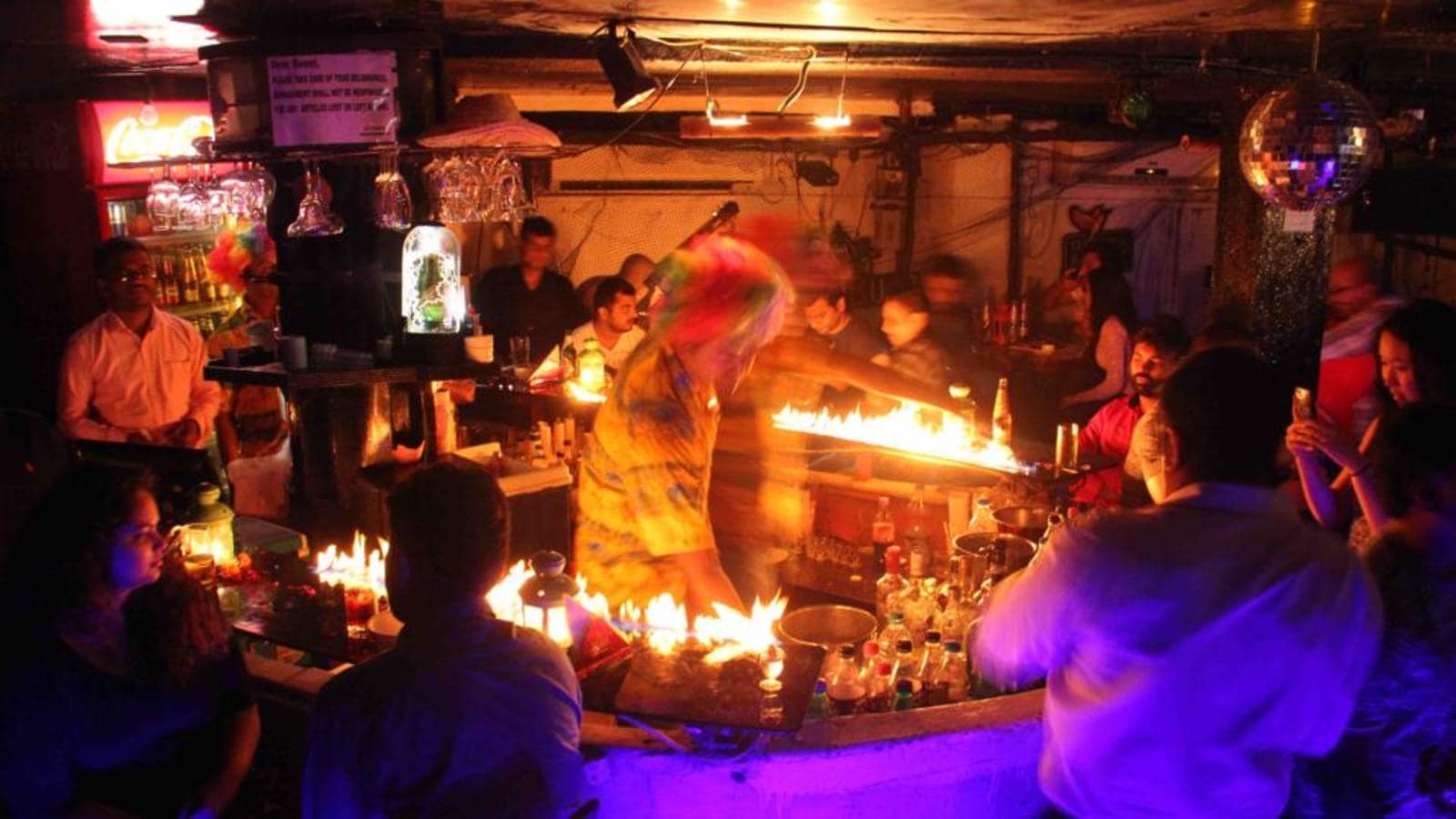 Panaji: On an early December evening just past sunset, John Lobo turns on the glittering lights of his Good Luck Beach Cafe, a shack located along the Baga beach in North Goa. As evening turns to night the music will get louder and the tempo faster as tourists turn the shack deck into an impromptu dance floor.

Lobo watches on with mixed feelings as the youngish crowd that is drawn to his shack begins to dance wildly, making the most of their time in Goa.

“Every day there are tourists dancing about and the shack is quite crowded,” Lobo said quite pleased that business has picked up after a devastating second wave earlier this year. “But we can’t escape the feeling that we have a sword hanging over our heads,” Lobo said. That sword is Omicron.

Lobo is left with little choice. Deciding not to open would have meant a third festive season in a row where business was disrupted. He must embrace the risk.

Goa and the festive season

Much like Lobo, the state itself is facing a choice between the devil and the deep blue sea — and we are not talking about the elections some two months from now.

Memories of the tourist season last year that the government was reluctant to regulate leading to an especially deadly second wave of the virus are still fresh in the mind. In December 2020, with cases falling, tourism began to pick up eventually leading to large crowded gatherings and parties. The reluctance to crack down on violations of basic requirements of Covid protocol even led to a very public spat between Goa Chief Minister Pramod Sawant and his health minister Vishwajit Rane.

“Every weekend we see parties on the beach at Morjim and many other areas. It seems to be a free-flow party everywhere. As a result, the virus is infecting more people compared to last year… In clubs, we have seen people without masks, everybody jumping around the place. Action should be taken against such clubs,” Health Minister Vishwajit Rane said speaking in April this year. But Rane could just as well be speaking about the situation in Goa this December.

Weeks after Rane’s comments, the state was in the throes of an especially severe wave of Covid-19 with the state’s Goa Medical College and Hospital already having run out of beds. More than half of the nearly 3500 lives lost in Goa due to Covid-19 have been during the month of May including 85 due to oxygen shortages.

The exact scenario of gay abandon is now underway again. There is of course, some semblance of a difference this year. A majority of the state has been vaccinated with both doses, and locals have been encouraged with the dissemination of information that Omicron has “mild symptoms.” But with science still chasing the virus, particularly, there is much that is not known. Whether two doses of Covishield or Covaxin provide adequate protection, the need for boosters, vaccine or immune escape, and if the previous infection is any protection at all. The absence of this knowledge and the possibility of another wave, therefore, is making Goa nervous.

The financial distress in quieter Goa

But the scenes of packed bars, and streets full of tourists isn’t quite playing out all across Goa. And where it isn’t, business owners are feeling the pinch. Cruz Cardozo owns a shack on a beach in South Goa, in an area which predominantly was frequented by foreign tourists who prefer the quieter, less crowded areas of Goa. For him, this season is already looking like the last, with a bleak business outlook.

“The sentiment has completely changed. We were hoping that foreign tourists would finally come and bring some of the business back,” Cruz Cardozo said. “After the Omicron news broke the only tourists who are coming to this end are those who are here for largely pre-planned events like weddings, conferences,” he said. “And they don’t visit shacks.”

Charter flights which bring in the bulk of foreign tourists to Goa were scheduled to arrive from this month onwards, but with new restrictions in place, flights from the UK have been cancelled. Doubts remain over such flights from Russia, Ukraine and Kazakhstan.

Lobo is clear that in this atmosphere, what little tourism they get must be welcomed. “Outside of the beaches of Calangute, Candolim and up north in Morjim-Arambol, shack owners have not done very well in the business. So shutting the industry is also not an option,” he said.

But of course, it is clear that this may have its own repercussions. No regulations may mean burgeoning cases, which would then mean a possible complete lockdown again. “Already my suppliers are anxious about the situation and are asking to submit orders well in advance as they will be producing only as per the demand. Beverages like beer have a very short shelf life and they will not produce more if they are unsure of the demand,” Lobo said.

Prior to the pandemic, Goa received, according to government estimates, close to eight hundred thousand tourists of which nearly 80,000 were foreigners. As per a survey commissioned by the Goa government, the overall loss of earnings in the tourism industry during lockdown has been estimated at Rs.2,062/- crores. Potential loss of earning for the 2020-21 season has been pegged at Rs.7,239 crore and the potential job cuts were to the tune of 1.22 lakh (58%).

Goa’s tourism sector is a big source of revenue for the state with the industry directly contributing 16.43% towards the state Gross Domestic Product (GDP) and also provides employment to nearly 35% of the state’s population, according to official estimates.

For Jude Souza Lobo, proprietor of the popular Souza Lobo restaurant in Calangute the dilemma is deeply personal. He contracted Covid during the deadly second wave in May earlier this year and was hospitalised for several weeks. “If we choose to remain closed the staff will suffer. Those lower down the chain are the first to feel the effects. And it’s not just us business owners who depend on the industry. The entire ecosystem of suppliers, transporters and other workers depend on a good tourism season,” Jude told HT.

The impossibility of social distancing

A common complaint among restaurateurs and hoteliers in Goa has been the ‘impossibility’ of ensuring social distancing norms. “If we ask customers to remain vaccinated, they tell us they are vaccinated. Or that they are in Goa to have fun away from home,” Lobo said.

“Even the police cannot do anything. They are either too few or if they act too strict then some among us will complain that their actions are affecting the tourist sentiment,” Cardozo said.

The Goa government’s tourism department has said that their advisory including mandatory social distancing, use of masks while in public especially indoors remains while the government has not permitted any major events that involve large crowds.

“As of now, we have not allowed any major events. We are also keeping a close watch on the numbers as if and when they start to rise, restrictions will fall in place. They are expected to maintain social distance as if there is an outbreak the business will have to close,” Director of Tourism Menino D’Souza has said.

An application submitted by Sunburn for instance — a major annual electronic dance music (EDM) festival that is a major crowd puller has not been permitted by the Government. The organisers have instead now said that they have opted for a smaller-scale event on the ‘advice’ of the government.

The Sunburn decision, it is understood, was taken, largely with one eye on the upcoming elections next year with the government keen to avoid any negative political fallout. “The government doesn’t want to be seen to be promoting a mass gathering for the benefit of a major industry player at the cost of the health of the local population especially before an election,” an insider in the Chief Minister’s Office, privy to the discussions that led to the Sunburn permission being rejected, said.

Tourism department insiders say that the government has little choice but to try and strike a balance despite knowing well that things could look very grim come February, particularly with elections on the anvil. For now, the Goa government has not introduced any major curbs except on insisting on a compulsory Covid test on those arriving from high-risk countries and random sample testing on all foreign arrivals. Goa has not recorded any cases of the Omicron variant yet.

According to Dr Anil Mehindiratta, a pulmonologist and former head of the Goa chapter of the Indian Medical Association said that the only realistic option is to enforce masking and if possible roll out booster shots especially for the medical fraternity that is nearing a year since they first received the vaccine.

“This new variant is said to be 30 times more infectious and could even bypass the protection offered by the vaccines. Our only option right now seems to be masking up whenever in public and hoping for the best,” Dr Mehindiratta, said. “We have to learn to live with the virus. No doubt this being an industry that is sensitive to the overall atmosphere, tourism is the first to feel the effects. We are working with our international partners to ensure that they can avail of a seamless transition in and out of the state that should ensure more people are encouraged to travel,” Nilesh Shah, the president of the Travel and Tourism Association of Goa, said.

“Say your prayers, wear your mask and hope for the best,” Dr Mehindiratta said.

50 Indian nationals still in Ukraine as govt explores ways to...

Mumbai man duped of over Rs 3 lakh by fraudsters posing...