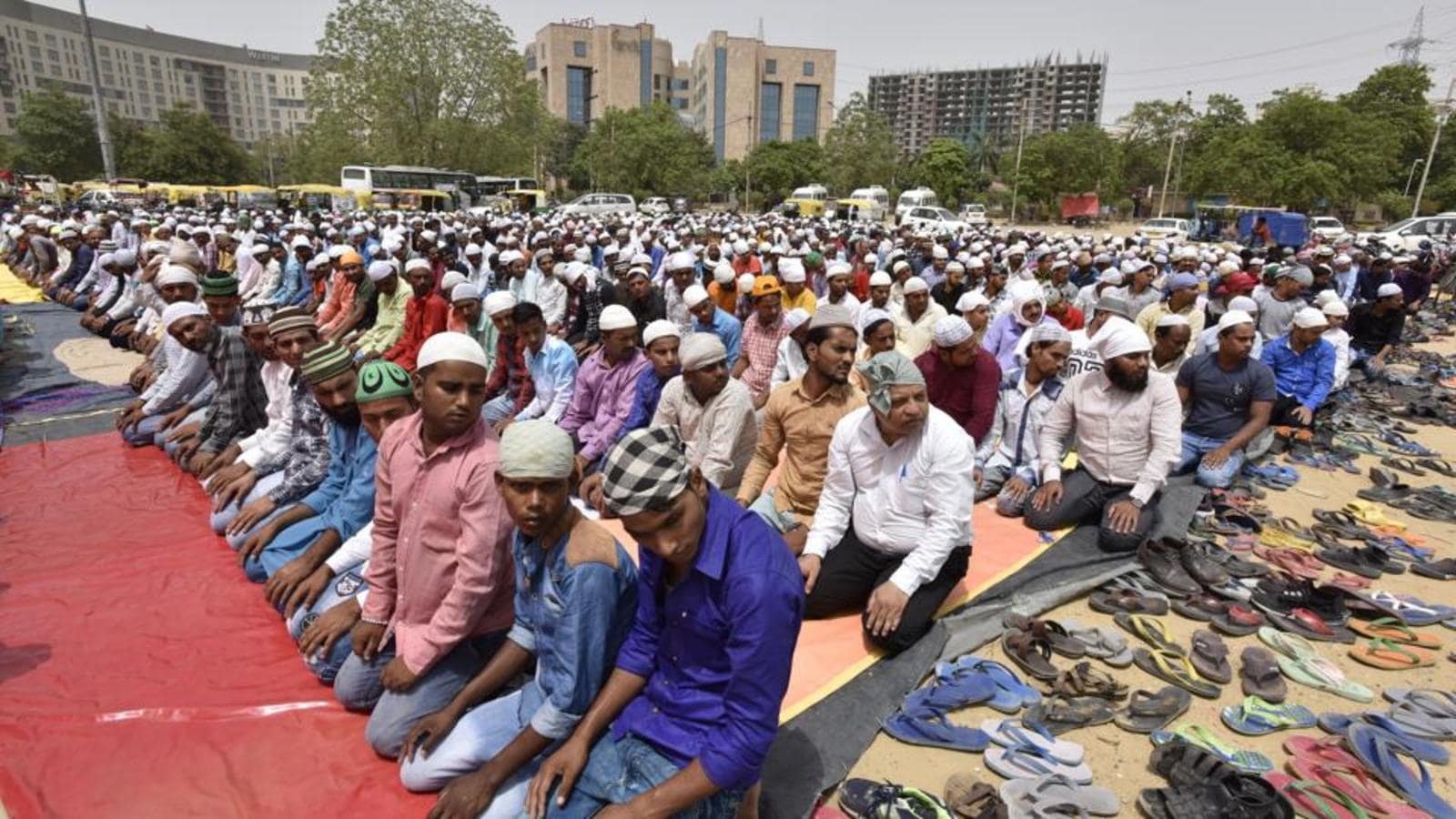 A controversy has been brewing in Haryana’s Gurugram over Friday namaz in public spaces. The last few weeks have seen aggressive protests by Hindu groups nearly every Friday, an administration that has been slow to respond, and a weekly law and order issue. The state government and district administration had initially granted approval for namaz at certain designated sites, only to withdraw it later amid these protests.

Haryana chief minister Manohar Lal Khattar said last week that offering namaz in public places could not be “tolerated.” To be sure, this is not the first time Khattar has spoken in this vein. In 2018 the Haryana CM had said that namaz should be offered at mosques, idgahs or other designated places rather than public spaces.

The Gurgaon Muslim Council on Monday responded that they are readying a petition to be filed in the Supreme Court later this week against the alleged vigilantism and the prohibition against namaz in public spaces.

Before Gurugram, Noida in Uttar Pradesh, another state ruled by the Bharatiya Janta Party (BJP), had prevented Muslims in December 2018 from offering namaz at public parks without prior permission.

These developments make it pertinent to understand the legal intricacies involved in the debate and the approach of the constitutional courts.

What is a public road and public space?

In Saghir Ahmad Vs State of Uttar Pradesh, 1955, the Supreme Court defined the characteristics of a public road when it said, “The true position then is, that all public streets and roads vest in the State, but that the State holds them as trustees on behalf of the public. The members of the public are entitled as beneficiaries to use them as a matter of right and this right is limited only by the similar rights possessed by every other citizen to use the pathways. The State as trustees on behalf of the public is entitled to impose all such limitations on the character and extent of the user, as may be requisite for protecting the rights of the public generally.”

In Sodan Singh Vs New Delhi Municipal Committee, 1989, the Supreme Court said that the primary objective of building roads is undoubtedly to facilitate people to travel from one point to another. Quoting Byron K Elliott and William F Elliott, the top court noted that a way over land set apart for public travel in a town or city is a street, no matter by what name it may be called. If a way is free to all people, it is a highway.

One interesting example would be the liquor prohibition law in Bihar that includes a vehicle within the remit of a “public place”. Therefore, a person can be prosecuted for consuming alcohol inside a vehicle or even being found drunk in a car.

The Supreme Court, in Satvinder Singh Saluja & Ors Vs State of Bihar in 2019, affirmed the Bihar government’s excise law as it declined to quash charges against four Rotarians from Jharkhand, who while travelling from Giridih to Patna in 2016 in a vehicle were subjected to a breath analyser test and were found to have consumed alcohol.

In April this year, the Delhi high court took a cue from this SC judgment when it ruled that a vehicle is a “public place” and hence, the wearing of a mask is mandatory even while driving alone in a car.

Article 19 (1)(a) lays down that all citizens shall have the right to freedom of speech and expression while sub-clause (b) gives the right to assemble peaceably and without arms. Article 19(1)(c) affirms the citizens’ right to form associations or unions.

The Supreme Court in Babulal Parate Vs State of Maharashtra, 1969, said that the right of citizens to take out processions or to hold public meetings flows from the right in Article 19(1) (b) and the right to move anywhere in the territory of India.

In 1972, a Constitution Bench, in Himat Lal K Shah Vs Commissioner of Police, Ahmedabad, ruled that the right that flows from Article 19 (1) is not a right to hold a meeting at any place, at any time.

In this verdict, the five-judge bench held, “We may make it clear that there is nothing wrong in requiring previous permission to be obtained before holding a public meeting on a public street, for the right which flows from Article 19 (1) (b) is not a right to hold a meeting at any place and time. It is a right which can be regulated in the interest of all so that all can enjoy the right.”

The top court concluded in this ruling that “in India a citizen had, before the Constitution, a right to hold meetings on public streets subject to the control of the appropriate authority regarding the time and place of the meeting and subject to considerations of public order.”

Article 25 of the Constitution maintains that all persons are equally entitled to freedom of conscience and the right freely to profess, practise and propagate religion, subject to public order, morality and health. Apart from the caveats mentioned above, the provision adds that the State shall still be entitled to regulate or restrict any economic, financial, political or other secular activity which may be associated with religious practice.

Similarly, Article 26 entitles every religious denomination to manage its own affairs in matters of religion but this right is also subject to public order, morality and health.

Courts and right to use public spaces for religious or other purposes:

A series of rulings starting from the Privy Council’s decisions may come handy to refer to the development of the law in India.

In 1882, in Parthasaradiayyangar Vs Chinnakrishna Ayyangar, it was held that persons are “entitled to conduct religious processions through public streets so that they do not interfere with the ordinary use of such streets by the public and subject to such directions as the magistrate may lawfully give to prevent obstruction of the thoroughfare or breaches of the public peace.”

In early 1950s, the Privy Council held in Manzur Hasan Vs Muhammed Zaman: “In India, there is a right to conduct a religious procession with its appropriate observances through a public street so that it does not interfere with the ordinary use of the street by the public, and subject to lawful directions by the magistrates.”

Later in the Saghir Ahmad judgment of 1955, the Supreme Court maintained that people are entitled as beneficiaries to use public roads and streets as a matter of right but this right is limited by the similar rights possessed by every other citizen to use them. The top court added that the State is empowered to impose all reasonable limitations for protecting the rights of the public generally.

In Railway Board Vs Niranjan Singh, 1969, the Supreme Court described the fetters on the right to hold meetings or any other gathering in government premises. “The fact that the citizens of this country have freedom of speech, freedom to assemble peaceably and freedom to form associations or unions does not mean that they can exercise those freedoms in whatever place they please,” it asserted.

In Himat Lal K Shah, the five-judge bench reiterated that the right that flows from Article 19 (1) is not a right to hold a meeting at any place, at any time. The top court concluded in this ruling that “in India a citizen had, before the Constitution, a right to hold meetings on public streets subject to the control of the appropriate authority regarding the time and place of the meeting and subject to considerations of public order.”

Similarly, the Supreme Court in Olga Tellis and Ors Vs Bombay Municipal Corporation, 1986, held, “Foot paths or pavements are public properties which are intended to serve the convenience of the general public. They are not laid for private use and indeed their use for a private purpose frustrates the very object for which they are carved out from portions of public streets.”

On balancing the rights of those who wish to use a public space for a particular purpose against another group that complain of violation of their right to use it, the apex court said in the Sodan Singh case that the liberty of one individual comes to an end where the liberty of another begins. “What is required of him is that he should not create an unreasonable obstruction which may inconvenience other persons having similar right to pass and he should not make excessive use of the road to the prejudice of the others,” it underscored.

In Dr M Ismail Faruqui Vs Union of India and Others, 1995, the apex court held that a mosque is not an essential part of the practice of the religion of Islam and namaz by Muslims can be offered anywhere, even in the open as it ruled that the power of acquisition is available to the State for a mosque like any other place of worship of any religion. At the same time, the court said that the right to worship, guaranteed under Article 25 of the Constitution of India, does not extend to the right of worship at “any and every place.” “The right to worship is not at any and every place, so long as it can be practised effectively, unless the right to worship at a particular place is itself an integral part of that right,” it said.

In 2009, the Supreme Court in Union of India Vs State of Gujarat, cracked the whip on unauthorised religious structures. “No unauthorized construction shall be carried out or permitted in the name of temple, church, mosque or gurudwara etc on public streets, public parks or other public places etc,” it ordered.

More recently, the Bombay High Court, in Mahesh Vijay Bedekar Vs State of Maharashtra, 2015, held that public streets are essentially provided for people to walk and ply vehicles and they have a right to use them. Circumscribing the powers of municipal bodies, the high court held that local authorities cannot grant permission for temporary erection of a booth and any other such structure on any street on occasions of ceremonies and festivals if it is likely to affect free movement of vehicular traffic or obstruct free movement of the pedestrians. Additionally, the high court said that municipal bodies of commissioners/district magistrates can give such permissions only after the police agree to such temporary structures after taking into account the law and order situation. The high court further directed the municipal corporations to frame a policy for dealing with grants of such permissions.

In 2018, the Supreme Court came across a question as to whether public premises and public parks can be used for performing ‘Ram Leela’, ‘Mata Ki Chowki,’ and implicitly, other religious functions. The issue had arisen following a decision of the National Green Tribunal (NGT) denying permission to hold a ‘jagran’ (overnight prayer meeting) and ‘Mata Ki Chowki’ at a park in Delhi. A two-judge bench referred the matter to a larger bench, noting: “The appeal raises a question of great constitutional importance as to whether such activities can be allowed in state owned premises in view of our Constitution being secular in nature.” While the case was referred to a three-judge bench, there has been no effective hearing of the case after July 2018.

Goa elections: PWD minister steps down, to contest as independent