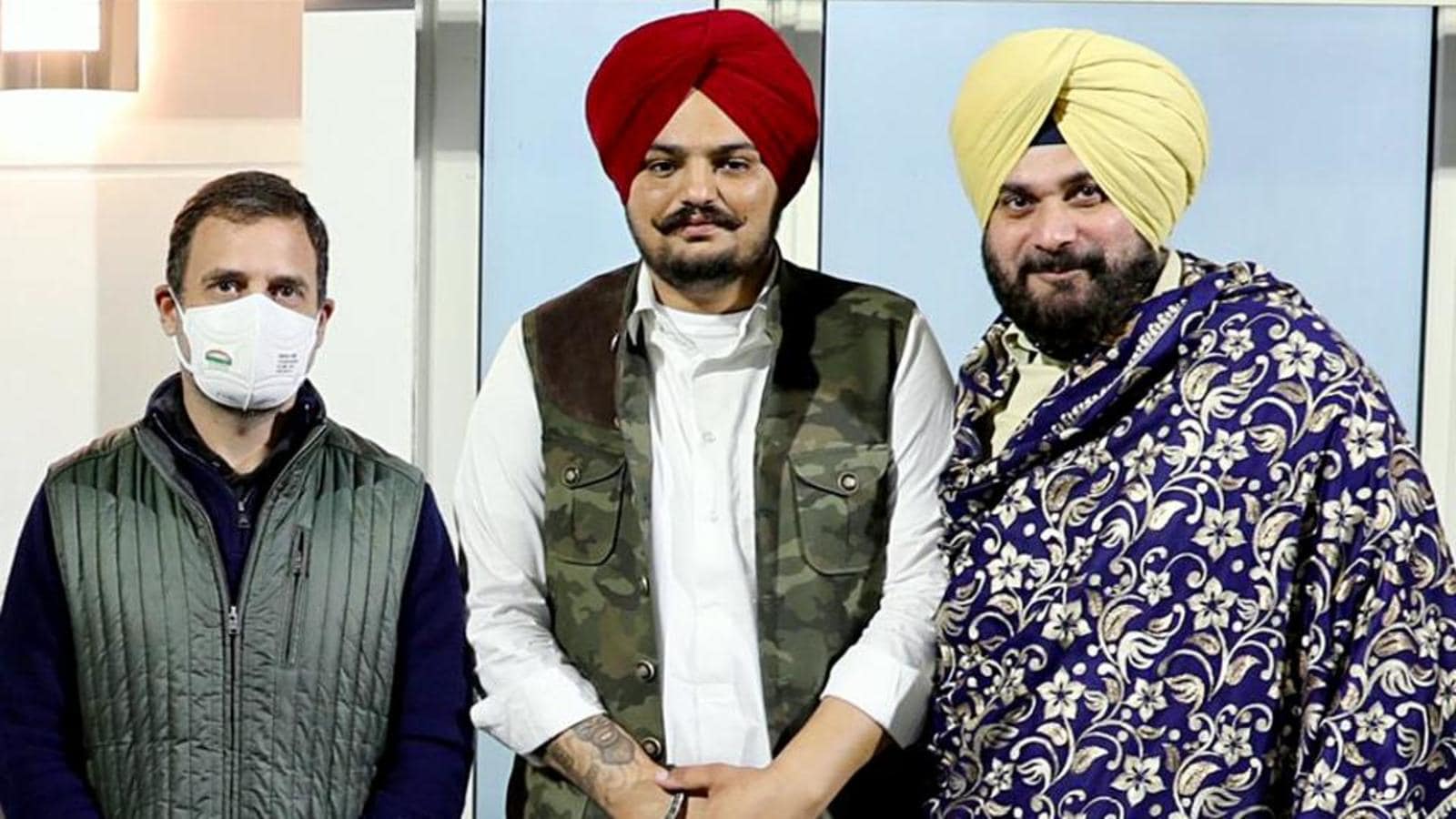 Come election season, people joining political parties, often crossing over from another outfit, is not unusual. Often though, the measure of importance the party is attaching to the new entrant is the stature of the people conducting the induction. By those, or any standards, on December 3, 28 year old Sidhu Moosewala had laid in front of him the proverbial red carpet. To his left was Punjab chief minister Charanjit Singh Channi, to his right the Punjab Congress president Navjot Singh Sidhu. Both sang paeans for the ‘youth icon’ that would invigorate the Congress, with Channi even calling it a “revolutionary day in the state’s politics.” Later that day, Moosewala would travel to Delhi, Channi, Sidhu and state in charge Harish Choudhary, Rahul Gandhi. Clearly, the Congress believes, Moosewala is an important inductee in Punjab.

On the face of it, there are reasons for this attention. In Punjab, Moosewala is one of the state’s most famous singers, with a particular fan catchment among the youth. He has 10 million subscribers on Youtube and 7 million followers on Instagram, and therefore among the most popular Punjabi singers.

But Moosewala’s grand entry into the Congress has surprised and shocked many, including some within the ruling Congress. For Moosewala comes with baggage– criminal cases, a history of violent songs that promote gun culture, and the alleged support of radicals.

For many years, Moosewala has seemed to have a fascination with guns, and controversy has never been far behind. His pages on Instagram, Facebook and Twitter often show him carrying weapons or in the company of people that are armed. His official YouTube channel logo at one time depicted a man dressed in black, with a covered face, carrying an AK-47 assault rifle.

The singer first ran afoul of the law in February 2020 when he was booked under Sections 509 (intentional insult with intent to provoke breach of the peace), 294 (reciting obscene songs) and 149 (unlawful assembly) of the Indian Penal Code in Mansa district for allegedly promoting gun culture through a song titled ‘Panj Golian (five bullets). On May 4 last year, he was booked again by the Barnala and Sangrur police for offences under the Disaster Management and Arms Act after videos showing him firing an Ak-47 rifle and a revolver at firing ranges during the corona virus induced lockdown went viral on social media.

After he got bail, Moosewala released a song called “Sanju”, taking pride in the cases registered against him under the Arms Act, comparing himself with Bollywood actor Sanju Dutt who has once also been booked for the illegal possession of an assault rifle. The lyrics of his song went like this.

The police then registered another case against him under the Arms Act and sections 188 (disobedience to order) and 294 (obscene acts and songs) and 504 (provocation to break public peace) of the Indian Penal Code in July 2020 for glorifying the use of weapons and boasting about the FIRs through this song.

The reaction to Moosewala

Opposition parties and experts have been quick to lash out at the Congress for the induction with BJP general secretary Tarun Chugh dubbing the parties support to “such criminal elements” as a warning bell for the state. Guru Nanak Dev University’s former head of political science Professor Jagrup Singh Sekhon says this exposes the Congress party’s lack of commitment to ideology and their internal contradictions. “They just want to win the elections. Moosewala may pull in crowds and help them get some votes, but what about the ideology of the party and its leaders. They talk about a culture commission to curb the glorification of arms in Punjabi songs, but then take someone indulging in the same. This is the crisis in politics,” he said. As a cabinet minister in the Captain Amarinder Singh led Congress government, Navjot Singh Sidhu had in March 2018 announced the setting up of the Culture Commission with the chief minister as the patron-in-chief to check the glorification of weapons and vulgarity in Punjabi films and music. The commission, predictably, failed to take off.

The joining of Moosewala has also led to resentment among a section of their own leaders in Mansa district, visible at the Congress rally in the area on December 10 – the first party event attended by the singer. A group of party workers, carrying photographs of youth congress leader Chuspinder Singh Chahal, a claimant for the Congress ticket from Mansa, protested his induction in the presence of the chief minister.

Why is he worth it?

But the Congress sees Moosewala as worth the risk, and critical to its electoral plans in Mansa, to which the singer belongs, and the adjoining districts of Barnala, Sangrur and Bathinda. The party wants to counter the Aam Aadmi Party (AAP) whose state chief, comedian-turned-political Bhagwant Mann, is also a huge draw. Though the Congress had won a two-thirds majority in the 2017 state polls, it drew a blank in Mansa and Barnala districts which have three assembly seats each. The party also faced stiff competition from the AAP in Bathinda and Sangrur.

“Moosewala is hugely popular among the youth who admire him. In his songs, he talks about correcting the system. It is gain for the party,” says Surinder Dalla, media adviser to Punjab Congress chief Navjot Singh Sidhu, fobbing off criticism. No senior Congress leader wanted to comment on the gun culture and criminal cases that come associated with Moosewala, but one leader said that Punjab was a “border state” and had a culture of people keeping weapons, as well as joining the defence forces.

In a sense then, Moosewala’s entry, at least from a political lens, has very little risk. Mansa and Barnala are weak spots for the Congress, and there are no political repercussions, at least locally, if Moosewala’s entry is unsuccessful. A former state Congress general secretary said that Mansa and Barnala are backward districts and the AAP had caught the imagination of people there. “The AAP’s slogans of bringing change in politics and ensuring development worked in some of these areas, but they quickly lost their goodwill due to internal bickering and desertions,” said the leader. The AAP had contested the state assembly elections in Punjab for the first time in 2017 and won 20 seats to emerge as the principal opposition party.

While Moosewala could not be contacted, in his address in the rally at Mansa, he blamed political rivalries for the district remaining underdeveloped. “It is high time that we all get united. The Congress has several senior leaders in the district and I will take whatever role the party assigns me,” he said.

The singer’s accessibility to his fans and the support he extended to farmers during their protest at Delhi’s borders against the three farm laws are also being cited as in his favour. Moosewala held a huge gathering in Mansa and then led a protest march to Chandigarh in September 2020. On November 30, he also went to the Tikri border to show solidarity with the protesting farmers.

There is already talk in Congress circles that he may be fielded from Mansa – a seat that the party has won only once in the past five elections. “We have nothing to lose. Sitting MLA Nazar Singh Manshahia has already joined the Congress from the AAP and Moosewala’s entry will also give a boost to our prospects, irrespective of who gets the ticket,” argued another Congress leader.

Other performers that took the political plunge

But even if the singer can pull into crowds, the jury is still out on whether it will turn into substantive gains on the ground. Moosewala has now joined a long list of Punjabi language performers like Bhagwant Mann, Hans Raj Hans, Mohammad Sadique, Jassi Jasraj and Gurpreet Ghuggi who have taken the political plunge in the past, with varying degrees of success. Mann is a two-time MP from Sangrur and the most popular state leader of the AAP in Punjab, whereas Sadique became a legislator from Bhadaur in his electoral outing in 2012 and then got elected to Lok Sabha from the Faridkot reserved constituency in 2019. Hans, who comes from the Valmiki community, joined the SAD and contested the Lok Sabha election from Jalandhar in 2009, but lost. When he was denied the ticket in 2014, the singer-politician joined the Congress. Hans got his first taste of electoral success with the BJP – the party he joined five years ago, which fielded him from the North West Delhi Lok Sabha seat in 2019. Ghuggi and Jasraj, on the other hand, had a short and unsuccessful stint in politics.

Moosewala’s political career could go either way. But already it is clear that as Punjab goes to the polls, his future will be one of many interesting subplots that awaits.

Civilian hospitalised after being shot at by terrorists in Shopian; condition...