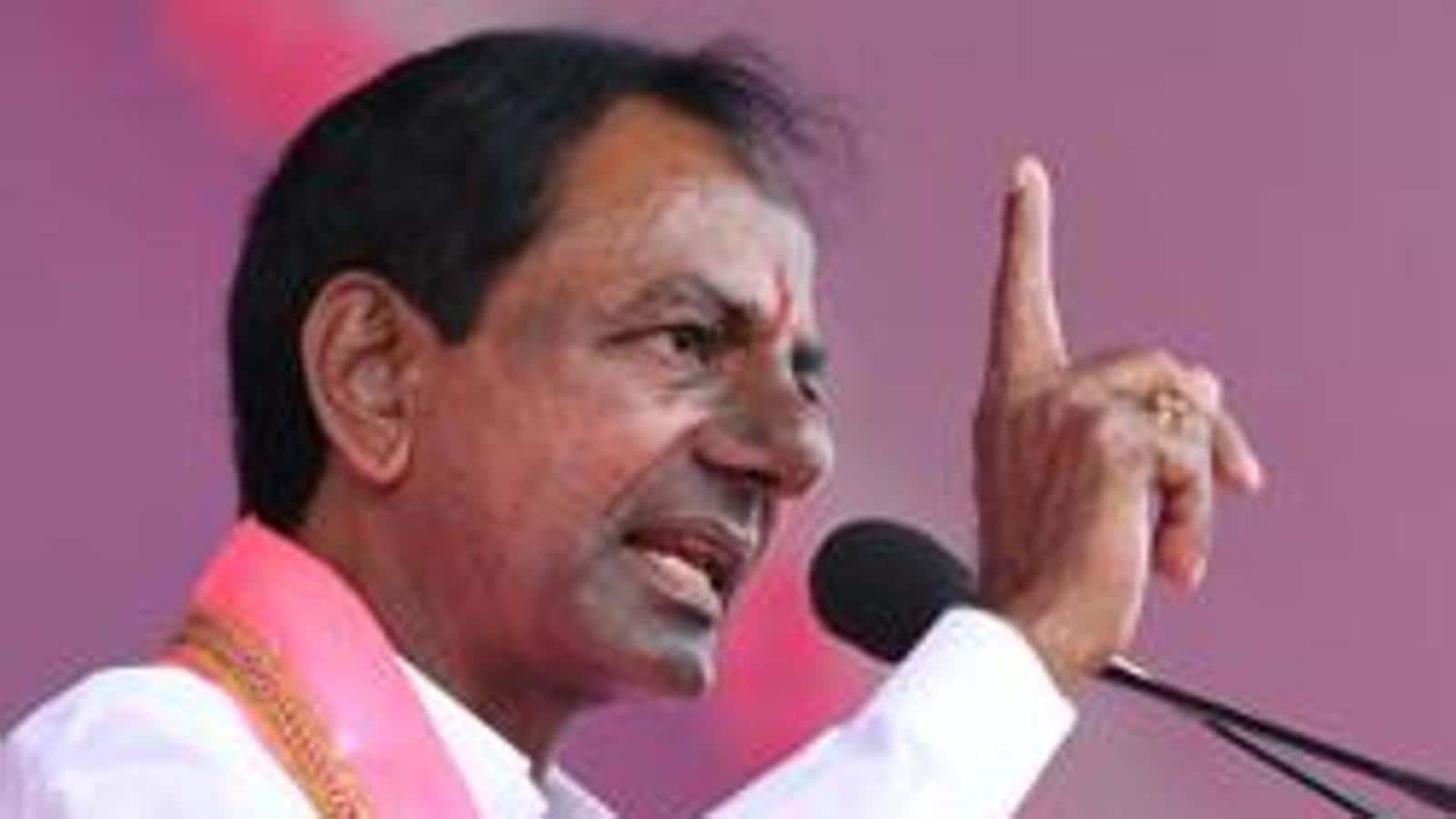 Hyderabad: In December 2018, Telangana Rashtra Samithi president K Chandrasekhar Rao returned to power in Telangana for a second successive term with a massive mandate. Three years down the line, the political picture isn’t quite as rosy. The TRS supremo has found himself with a plethora of problems – a possible anti-incumbency wave built on unrest among unemployed youth, problems in paddy procurement and a failure to fulfil promises like three acres of land for Dalits and the building of over 2.5 lakh double-bedroom houses for the poor.

Facing KCR is also a challenging financial position that Telangana finds itself in, a dispute with neighbouring Andhra Pradesh over sharing of river water, and above all the emergence of an aggressive BJP as a powerful political force. If this second term has been challenging, the next two years could be even more difficult for KCR, as the chief minister is popularly called.

HOW KCR MANOEVRED HIS 2018 WIN

This is not the first time though that Rao is facing such a challenge, even if the extent is still up for question. Before his re-election, KCR also faced anti-incumbency of sorts in the last leg of his first tenure itself. But he sprang a surprise on the opposition by dissolving the state assembly six months ahead of its term.

As a result, the assembly elections were held on December 10, 2018, instead of six months later. Strategically, KCR launched two schemes – Rythu Bandhu which provided ₹8,000 per acre to each farmer every year and Rythu Bima which provided ₹5 lakh to the families of each farmer who had died of agricultural distress, exactly six months before the elections.

The opposition, particularly the Congress, already beleaguered was caught completely unawares. In retrospect, the Congress also made the political mistake of allying with the Telugu Desam Party president, led by the then chief minister of Andhra Pradesh N Chandrababu Naidu. Rao ran his campaign on the emotive Telangana sentiment and came back to power with a resounding majority, winning 88 of 119 seats.

In close to no time, the TRS caused the opposition to disintegrate, with 12 of the 19 Congress MLA’s, both TDP MLA’s and two independent MLA’s all inducted into the TRS. And by wresting one more seat from the Congress in the subsequent by-election to Huzurnagar, held by PCC president N Uttam Kumar Reddy, the TRS’ tally crossed 100.

But despite the two wins and the margins thereof, questions around Rao’s style of functioning have remained, with opponents calling him autocratic. When KCR was sworn in as the chief minister for the second time on December 13, 2018, only one minister – Mohammad Mahmood Ali – took the oath along with him. He did not form a full cabinet for the next two months and expanded his cabinet only on February 19, 2019. A full-fledged cabinet was formed only in September 2019 with the induction of his son KT Rama Rao and nephew T Harish Rao, with disgruntlement brewing in the party.

Soon after winning the assembly elections, KCR set his eyes on national politics. As a first step, he made his son KT Rama Rao, or KTR as he is known, the working president of TRS, sending the signal that the latter would be anointed as the next chief minister in case KCR moved to Delhi.

Between December 2018 and March 2019, the TRS chief went from one state to another to meet leaders of regional satraps like Mamata Banerjee of West Bengal, M K Stalin of Tamil Nadu, H D Kumaraswamy of Karnataka, Akhilesh Yadav of Uttar Pradesh, Naveen Patnaik of Odisha and Hemanth Soren of Jharkhand looking to muster support for his plan of floating a federal front before the 2019 general elections.

However, that ambition was short-lived as the BJP under Prime Minister Narendra Modi returned with a bigger national mandate. There was a setback closer home too when his party won only 9 of 17 seats, when they had expected at least 15. It was this election that heralded the rise of the BJP in Telangana as well. The party which won only one assembly seat and lost deposits in 103 others in the assembly elections in December 2018, bounced back by winning four parliamentary seats, with the Congress winning three as well.

The results saw KCR change tack, and attempt to restore his ties with the Centre but a BJP now smelling political dividend in the state refused to play ball. His relationship with Andhra counterpart Jagan Reddy, which had shown promise with the agreement of a joint irrigation project to link the Godavari river to the Krishna basin has become increasingly strained too. Over the past two years, the states have had a strained relationship over water sharing issues on the rivers Krishna and Godavari, with both states lodging a series of complaints to the Centre and the National Green Tribunal on irrigation projects on these rivers in the other state.

On June 19, Rao managed to retain his popularity with the TRS capturing 90 percent of the block parishads and all 32 zilla parishads in the local body elections. Except since then, the going has become tough. Bar the partially completed Kaleshwaram lift irrigation project, there has been little to parade. The financial situation of the state is seemingly in difficulty, causing cuts in the expenditure on schemes like double bedroom housing for the poor and filling up job vacancies in the public sector.

In the first year of the second-term, the annual budget was pruned down from ₹1.87 lakh crore to ₹1.37 lakh crore. And in 2020-21, hit by Covid 19, finance minister T Harish Rao said the state had lost revenue of ₹4,200 crore. With pressure mounting from government employees, the state government was forced to announce a pay revision with a 31 per cent hike in salaries in April 2021, and an increase in the retirement age from 58 to 61.

THE RISE OF THE BJP AND A REVITALISED CONGRESS

Politically too, a series of setbacks to the party in the last year has put KCR on the defensive. The BJP, under the leadership of Karimnagar MP Bandi Sanjay, has been making rapid progress and won the by-election to the Dubbak assembly seat in Rao’s home turf Medak, besides winning 48 seats as against 56 for the TRS in the 150-member Greater Hyderabad Municipal Corporation (GHMC) elections.

The unceremonious sacking of his cabinet colleague Eatala Rajender in May this year, ostensibly on allegations of land grabbing seems to have politically backfired too. Rajender quit the party and the assembly seat, to contest the Huzurabad by-elections on the BJP ticket. Rao was aggressive during the campaign in Huzurabad, even announcing the Dalit Bandhu scheme, paying ₹10 lakh in cash to every Dalit family for various self-employment schemes. Despite this though, it was Rajender who emerged victorious.

With options now running out and a surging BJP, Rao has now launched a no holds barred attack on the BJP in general and the Narendra Modi government in particular. As farmers in the state have faced untold hardship because of a lack of paddy procurement during the Kharif, and the Centre’s refusal to buy paddy during the Rabi season, Rao has sought to blame the centre. The TRS organised state-wide dharnas and KCR himself, for the first time since he came to power, sat on the dharna in Hyderabad in protest against the Centre’s refusal to purchase paddy. The BJP, too, launched counter-dharnas, accusing KCR of passing the buck to the Centre.

At the same time, the Congress too, has begun growing in strength after firebrand Malkajgiri MP A Revanth Reddy took over as the president of Telangana Pradesh Congress Committee. It has been aggressively going about its agitation programmes, besides stepping up a membership drive. Reddy has been drawing huge crowds to his meetings all over the state. A couple of smaller players too, like YSR Telangana party president Y S Sharmila and former IPS officer R S Praveen Kumar who joined the Bahujan Samaj Party, have also turned out to be big irritants for KCR.

WHAT THE FUTURE HOLDS

Political analyst Sriram Karri said the next two years are going to be tough for Rao. “The next 12 months, which must set the tone of this government, before Telangana enters the election year in 2023, is likely to be marked by opposition-led events and a growth in anti-incumbency against family-led politics, broken promises, and an autocratic manner of governance,” he said.

All India Congress Committee (AICC) official spokesman Dasoju Sravan said KCR had betrayed the huge mandate given by the people. “He ignored crucial sectors – education, healthcare, employment and agriculture and brought the state to the brink of bankruptcy,” Sravan said. “The next two years will also be no different,” he added.

Telangana BJP official spokesman K Krishnasagar Rao said the last seven years was a wasted opportunity for the chief minister. “Except a few irrigation projects and schemes, KCR has done nothing for Telangana. He adopted brazen politics of populist schemes and indulged in large scale corruption. The economy is in total shambles,” Rao said.

Making sense of inflation and the IIP numbers

Teens have sigh of relief as wait for Covid vaccine ends

Explained: The fire at Ukraine’s nuclear power plant and the risks...