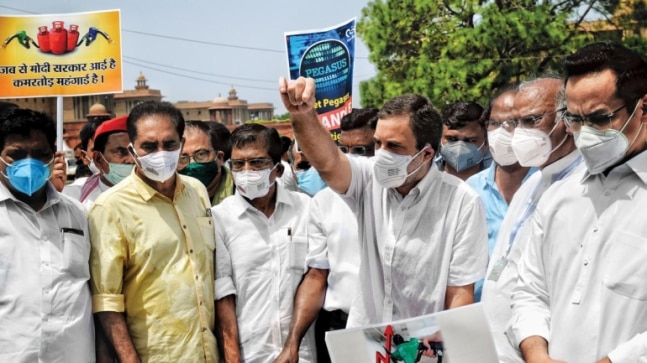 On August 20, the Congress president Sonia Gandhi held a virtual meeting with the leaders of 18 other political parties in opposition to the BJP, which is in power at the Centre. This was the third such meeting convened by the Congress’s top leadership. During Parliament’s monsoon session, Rahul Gandhi had met with opposition leaders twice, hosting a breakfast for them on one occasion. These developments are being seen as the first concerted moves by the Congress to create an alliance of anti-BJP parties since Prime Minister Narendra Modi first came to power in 2014.

On August 20, the Congress president Sonia Gandhi held a virtual meeting with the leaders of 18 other political parties in opposition to the BJP, which is in power at the Centre. This was the third such meeting convened by the Congress’s top leadership. During Parliament’s monsoon session, Rahul Gandhi had met with opposition leaders twice, hosting a breakfast for them on one occasion. These developments are being seen as the first concerted moves by the Congress to create an alliance of anti-BJP parties since Prime Minister Narendra Modi first came to power in 2014.

While the next Lok Sabha election is three years away, this early alliance-building seems to have been triggered by the realisation that opposition parties need to formulate a cohesive and consistent narrative against the BJP to take advantage of the public despair resulting from the loss of lives and economic devastation caused by the Covid-19 pandemic. There have been other catalysts too. Buoyed by a comprehensive victory over the BJP in the West Bengal assembly election, chief minister and TMC (Trinamool Congress) chief Mamata Banerjee also visited the national capital to meet opposition leaders, including those from the Congress, setting herself up as a potential lynchpin for an anti-BJP alliance. Prior to that, the NCP (Nationalist Congress Party) strongman Sharad Pawar had held parleys with opposition leaders too. These developments have prompted the Congress to stake its claim to the leadership position in the opposition space.

The leadership issue, however, seems to be the least of the concerns among non-Congress opposition parties. Most leaders concur that the electoral success of any opposition alliance will depend on pragmatic seat-sharing, guided by the organisational strength of various parties in different states. “There was no need to even discuss the leadership. There is a consensus that we will follow the model of cooperative federalism. Whichever party is strong in a particular region will take the lead in that zone. So, if the RJD (Rashtriya Janata Dal) has to perform well in Bihar, the Congress must also deliver in states where it is in direct contest against the BJP. There is no friction,” says Professor Manoj Kumar Jha, RJD Rajya Sabha MP.

While this looks a workable plan on paper, it is the performance of the Congress that will eventually determine the alliance’s success. It remains the only party with a pan-India presence, making it by default the pivot of the alliance. Yet, electorally speaking, it currently looks the weakest among all opposition parties. In 108 Lok Sabha seats across 11 states (see graphic, Head to Head), the Congress and the BJP are locked in almost direct contests. In 2019, the Congress won only five of these 108 seats, drawing a blank in seven states.

There are another 205 seats across 10 states where the Congress is either the dominant party or a key player (see graphic). In 2019, the Congress won 41 of these, with 31 seats coming from only three states—Kerala, Tamil Nadu and Punjab. Its performance in the recently-concluded assembly polls in five states doesn’t show any significant change in its fortunes either. In Tamil Nadu, it was a junior party in the DMK-led coalition. In Assam, where it won three seats in 2019, it was a distant second to the BJP. More worryingly, it even failed to effectively challenge the ruling Left in Kerala, where it won 15 seats in 2019, its highest tally from a single state. The infighting in Punjab, where it won eight seats, doesn’t augur well for the party either.

It is, therefore, not surprising that election strategist Prashant Kishor, who helped Mamata Banerjee in West Bengal and M.K. Stalin in Tamil Nadu emerge victorious in the assembly polls earlier this year, has identified around 300 Lok Sabha seats where the Congress must start planning from now for a winning bid in 2024. He has already approached the Congress expressing his desire to join the party and has even submitted an elaborate plan to revive the party’s fortunes. Even while he had been liaising with Mamata, Pawar and other opposition leaders, Kishor made it clear that an opposition alliance could not succeed without the Congress.

However, the grand old party must set its house in order if it is to deliver results. The immediate task is to end the ambiguity over its leadership. Ever since Rahul resigned, taking responsibility for the 2019 Lok Sabha defeat, Sonia Gandhi has been acting interim president. But that has not stopped Rahul from calling the shots. The emergence of Priyanka Gandhi as a third power centre has only added to the confusion. Seeking an end to this arrangement, 23 Congress leaders, now known as the G23, had written to Sonia Gandhi in August last year, demanding an organisational overhaul, including elections for the post of president. Though an election was promised, it has been repeatedly postponed because of the pandemic. The party is likely to hold this election by the end of this year, though it remains unclear whether anyone from the Gandhi family will contest the poll. Going by his active involvement in decision-making—particularly in the appointment of state Congress chiefs and in leading the party in Parliament—it is almost certain that Rahul’s official return to the helm is imminent.

Sources say the revamp of the Congress was one of the major points of discussion. There was a consensus that the Congress had to lead from the front, but that it needed to strengthen its internal structure first. Some leaders openly stated that the rejuvenation of the Congress could happen only if the party was “freed from the clutches of the Gandhis”.

Top Congress leaders, however, seem unperturbed by these narratives. “I’m not going to comment on an individual’s choice of guest list for his birthday celebration,” says Randeep Singh Surjewala, the Congress general secretary and in-charge of the party’s communication department. “The Gandhis depict the alternative narrative against an arrogant government which has launched a relentless assault on lives and livelihoods and compromised India’s national security and territorial integrity. Opposition parties agree that the centre point for our coalition is to save the country’s core fundamental values by getting rid of the Modi government. To achieve that, they must work with the Congress.”

That some opposition leaders remain wary of doing business with the Gandhis was also indicated by the presence of former Uttar Pradesh chief minister Akhilesh Yadav at the Sibal dinner. He has avoided being part of any Congress-led meeting of opposition parties, even excusing himself from the August 20 meeting convened by Sonia Gandhi. Other major leaders who have avoided such meetings include BSP (Bahujan Samaj Party) chief Mayawati and Delhi chief minister and AAP (Aam Aadmi Party) supremo Arvind Kejriwal.

There has also been some disagreement among opposition parties over their common narrative. For instance, at the meeting on August 20, several leaders expressed reservations over making the Pegasus snooping scandal a major talking point, saying that such a technical issue is unlikely to find resonance among rural voters.

However, these handicaps have failed to dampen the spirit in the opposition camps. “In the Olympic hockey matches, we saw how the fortunes of teams changed in every quarter,” says the TMC’s Derek O’Brien. “It has been only three months since the BJP was annihilated in West Bengal, Kerala and Tamil Nadu. Let’s wait for the other quarters. The match is not over yet.” n

‘Instead of removing’: What Aaditya Thackeray says on loudspeaker row triggered...