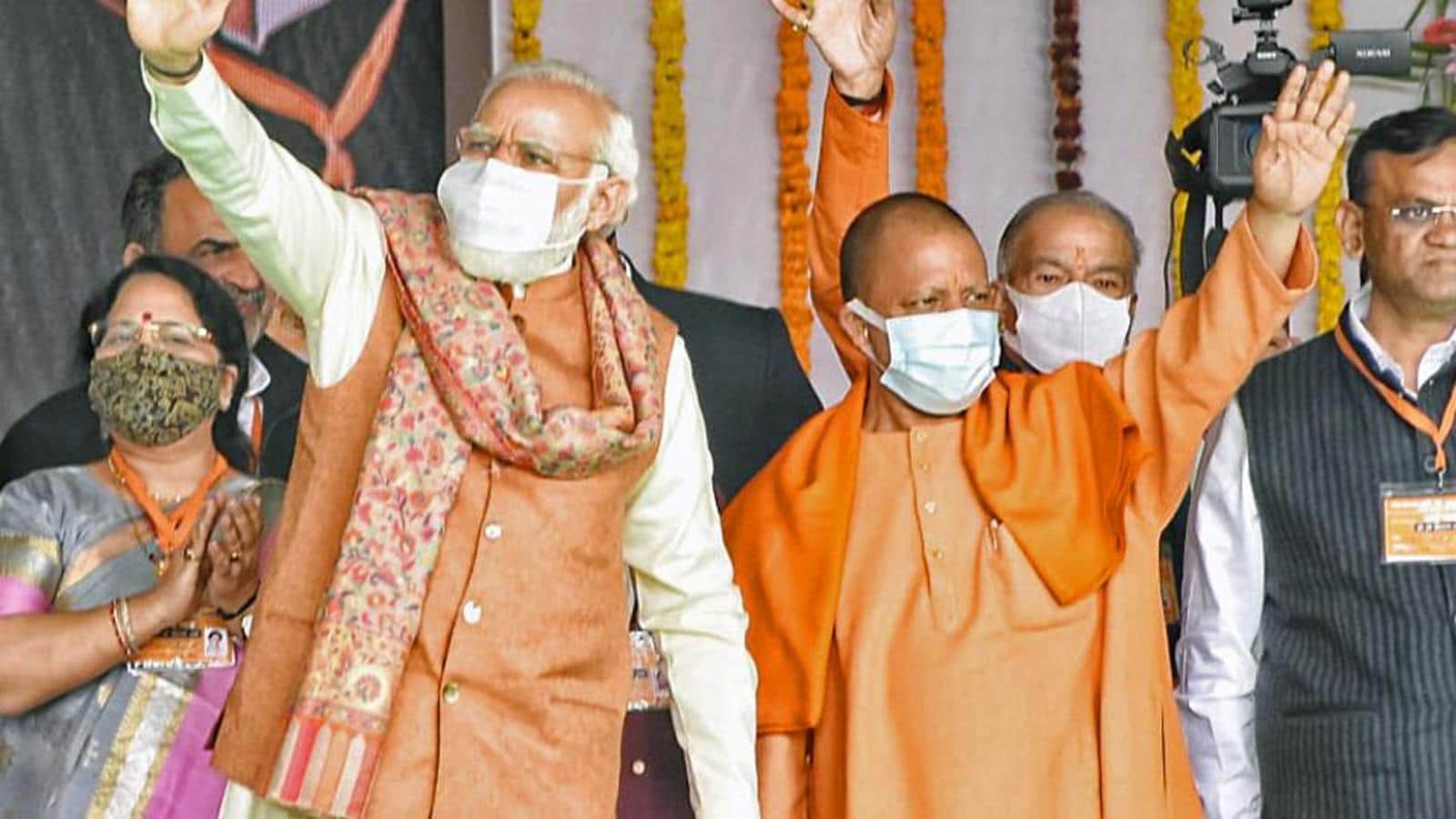 In the 2014 Lok Sabha election in Uttar Pradesh, the results seemed to suggest that voters cast their ballots based on a leader’s personality and promise of progress, keeping aside traditional factors such as caste.

Narendra Modi, then the prime ministerial candidate for the Bharatiya Janata Party, flew down from Gujarat to Uttar Pradesh and adopted Varanasi as his Lok Sabha constituency. The party swept the 2014 elections, winning 71 of 80 seats and polling 42.6% of the votes.

The people of the largest state knew him as a Gujarati who transformed that state into a vibrant province, a dream that they themselves had cherished for decades. “I am from a backward caste, but will take the country forward.” Modi said, playing on both emotions and aspirations.

The major factor of the party’s three back-to-back victories was the leadership of Modi, who played on emotions (Hindutva) and aspirations (development). Though the BJP did not project a chief ministerial candidate in the 2017 assembly elections, Modi ensured the party won 312 of the 384 seats it contested. The SP-Congress alliance won 54, and the BSP, 19.

Significantly, though the party’s campaign revolved around him,the BJP diligently pursued its caste and identity agenda. Its victory was a reflection of its ability to consolidate the Hindu vote, marshalling support from backward classes other than those loyal to the Samajwadi Party, a section of Dalits who had traditionally voted for the Bahujan Samaj Party, and, of course, its traditional base of the upper castes.

Anti-incumbency has always been a factor in Uttar Pradesh, but the BJP is hoping that Prime Minister Modi’s charisma, the high-decibel campaign that has been underway over the past few years to project chief minister Yogi Adityanath as an efficient and able administrator, and a fragmented opposition will help it return to power.

“The disgruntlement of voters against their public representatives is much talked about in every election. But by the time voting day arrives, they vote for the leader of the party and not the candidate,” said Rajesh Singh, general secretary, Motilal Memorial Society in Lucknow.

Still, this time around SP’s “Akhilesh Yadav, is emerging as a challenger”, Singh admitted, although “he will have to assert himself, work hard and manage booths.”

Modi is once again the face of the BJP in the state polls, with Adityanath in tow, as the party emphasises its double-engine advantage of having the same ruling party at both the Centre and the state.

Both Modi and Adityanath have campaigned aggressively, launching schemes and laying foundation stones. Modi has visited the state 12 times in November and December to launch big-ticket projects. Adityanath himself has visited almost every district in the past two months. “I have been touring the state since becoming chief minister in 2017,” he told media persons a few days back. “So, why this hue and cry over my recent trips?”

The BJP is clearly taking no chances in a state which has voted for change in every assembly election since 2007, when the Bahujan Samaj Party broke a 14-year-long coalition jinx. The state voted for the Samajwadi Party in 2012 and the BJP in 2017.

While the BJP, equipped with elaborate poll paraphernalia and a battery of senior leaders, is confident , the SP, despite the constraint of being a one- man campaign believes it has a chance.

Battle between BJP and SP

Mayawati of the BSP is conspicuously absent from the poll scene and the Congress, analysts say, is unlikely to do well, although both Priyanka Gandhi, and Rahul Gandhi will continue to attract crowds. That the primary contest is between the BJP and the SP is evident in the former targetting the latter’s leaders, the analysts add. They also point out that some recent raids conducted by central agencies were on SP supporters.

The BJP and the SP were not only the first to hit the campaign trail, but have also entered into alliances with caste-based parties to bolster their prospects in different regions of the state.

“In 2019, we hit a hat trick. Today, the BJP is in a strong position with 50% vote, whereas our nearest competitor; the SP’s vote percentage is about 28-30,” BJP leader Vijay Pathak said. “The gap will not be easy to fill.”

Voters have already made up their mind for a change, countered SP’s Abhishek Mishra.

The backward classes of the state have decided to defeat the BJP in 2022, Akhilesh Yadav has repeatedly stressed. And he has continued to claim that most of the projects being inaugurated by Modi and Yogi were launched by his government between 2012 and 2017.

Congress leader Priyanka Gandhi Vadra has been critical of the government’s treatment of farmers, and also promised that 40% of its candidates will be women.

Farmers, especially those from the western part of the state were among those protesting three farm laws passed by the Modi government in 2020, which were repealed in December. Farmer ire, some analysts say, could affect the BJP’s prospects in this region.

The Lakhimpur Khiri incident on October 3 in which eight people including four protesting farmers were mowed down by a vehicle belonging to a BJP union minister’s son remains an issue, one which the opposition continues to raise. Priyanka Gandhi Vadra claimed the BJP has neglected farmers and pointed out that the union minister, Ajay Mishra Teni, continues to remain in office.

Unlike the BJP and the SP, which have stitched up alliances with caste-based regional outfits, the BSP and the Congress have decided to contest independently.

Mayawati is currently engaged in the distribution of tickets, besides finalising campaign plans with core team members, according to BSP national general secretary Satish Chandra Mishra, who has been touring the 86 reserved constituencies in the state.

The Congress, under the leadership of Priyanka Gandhi Vadra was the first to release an election manifesto with women’s welfare in focus. The party launched the Ladki Hoon, Lad Sakti Hoon races across the state to mobilise the support of women.

Although party leader Zeshan Ahmad insisted that the Congress has sincerely worked at the booth level, analysts say that the party will be a laggard for two reasons.

First, though Priyanka Gandhi has been making the right noises over public issues, especially crimes against women, farmers and Dalits, she does not have a team that can deliver. Secondly, her women’s agenda may not pay immediate dividends.

There is no single overarching poll issue that will decide the outcome. Unlike the 1990s, when the Ram temple agitation and reservations for backward classes played the pivotal roles, subsequent elections have been more around personalities and identities.

Through the 2000s, the backward caste politics of Mandal dominated the agenda. People voted for Mayawati and her social engineering in 2007, for change and Akhilesh Yadav in 2012 and then Modi in 2017.

“The issues are yet to evolve, but will vary from constituency to constituency,” BJP leader Amit Puri said.

The farm laws are an issue in the western parts of the state. Modi and Adityanath are factors in the east. Akhilesh Yadav’s return to power is the political wish of Avadh, while Bundelkhand, now out from the clutches of dacoits, yearns for water and development, say analysts.

The BJP is also hoping that it can leverage the under-construction Ram Temple, and the recently inaugurated Kashi Vishwanath Dham to its advantage, even as it emphasizes the Yogi government’s law and order, and welfare record.

State elections in Uttar Pradesh have always been crucial because of its sheer size. If winning the upcoming polls is important for the BJP for the 2024 Lok Sabha election, the opposition knows they will have to stop Modi’s victory chariot now to check the BJP’s poll juggernaut.

Praggnanandhaa and the Indian droves in junior chess

Eid, Parshuram Jayanti: 5,000 cops deployed ahead of festivals in Ahmedabad

Newsmaker | Behind complaint against Bagga, an AAP dentist leader and...

2 women stabbed to death for objecting to relative’s harassment