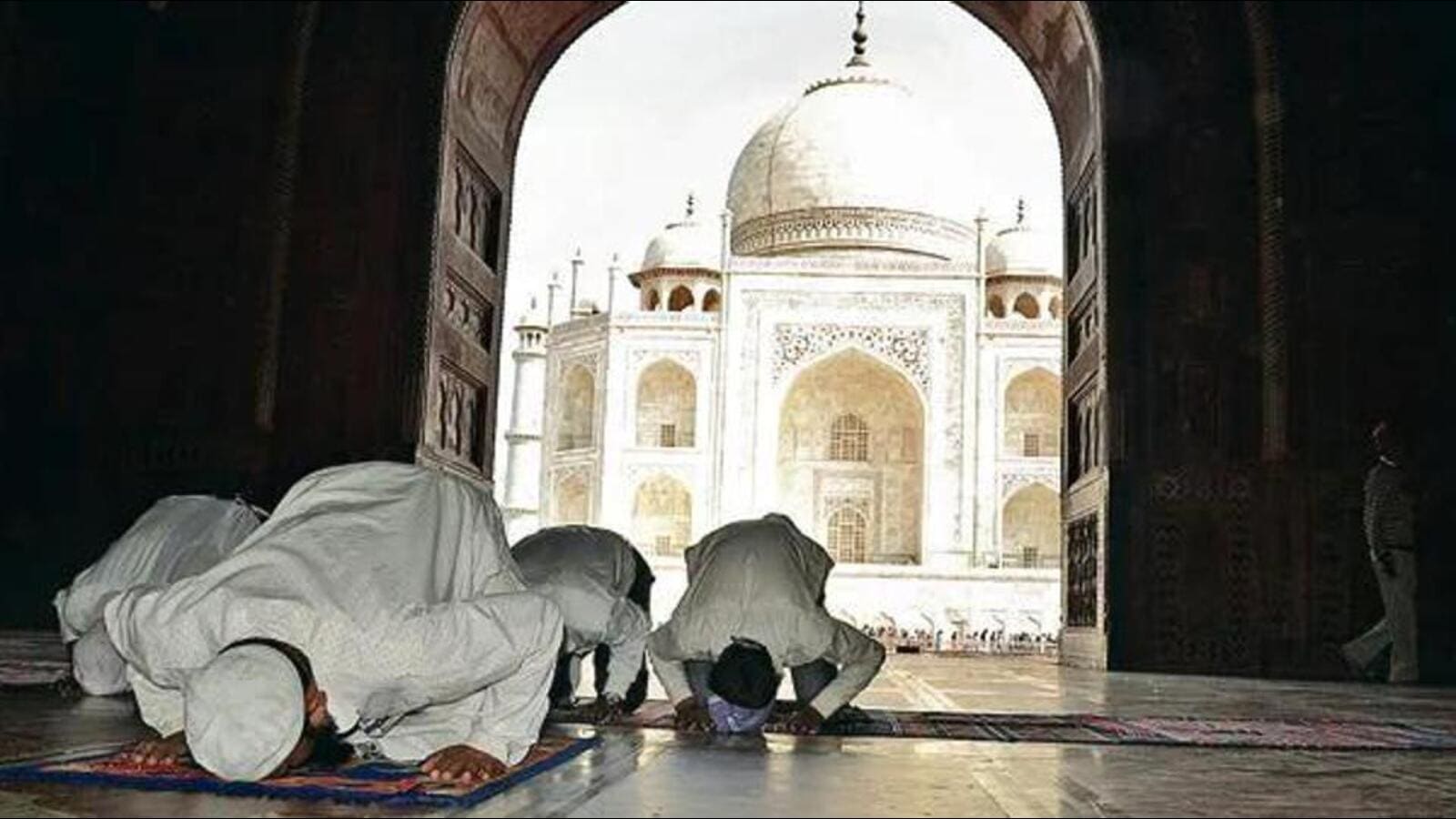 AGRA: Four tourists were arrested for offering ‘namaz’ at the mosque situated on the premises of Taj Mahal in Agra, police said on Thursday.

To be sure, the Taj Mahal remains closed only on Fridays for the general public but Muslim cardholders residing in nearby areas are allowed entry to offer namaz. According to the Archaeological Survey of India (ASI), offering namaz on any other day at the Taj Mahal mosque is not allowed.

Of the four people arrested on Wednesday, three are from Telangana while one is from Azamgarh district in Uttar Pradesh, said Agra (city) superintendent of police (SP) Vikas Kumar. He added that security officials had spotted six people offering namaz at the mosque but two fled.

A case was registered against the four at Tajganj police station. They were presented before the court on Thursday and were later released on bail.

“On Wednesday evening at around 7pm, the staff of Central Industrial Security Force (CISF) found six people offering ‘namaz’ at the mosque within Taj Mahal. CISF is the body entrusted with the duty of internal security at Taj Mahal and thus, an effort was made to nab them but two of them escaped taking advantage of the crowd within the monument premises but four were arrested,” said Kumar.

“The four nabbed by CISF staff were handed over to Tajganj station police and a case was registered under section 153 (wantonly giving provocation to cause riot) of the Indian Penal Code (IPS) on the complaint of CISF,” he said.

“Matter is being investigated and required action will follow,” he added.

The arrests come in the backdrop of pressure from right-wing Hindu groups demanding that they be allowed to offer prayers in what they claim is a Shiv temple (called Tejo Mahalaya) inside Taj Mahal complex.

“Those violating the Supreme Court orders by offering namaz at the mosque in Taj Mahal should be booked under National Security Act (NSA). If such a violation continues, we will also offer puja at Tejo Mahalaya, said Govind Parashar, national president of Rashtriya Hindu Parishad (Bharat).

“Our seers who came in wearing saffron are stopped at Taj Mahal gates and are not allowed entry but such violations by those offering namaz are allowed time and again,” added Parashar.

An official from the Taj Mahal Masjid Intezamia Committee said that ASI has failed to provide them with a copy of the Supreme Court order.

“We have been asking ASI to provide us with a copy of the Supreme Court order which says that namaz is prohibited at the mosque on Taj Mahal compound on days other than Friday. No such copy has been provided to us, nor there is any mention of it at the mosque in Taj Mahal or on the notice board,” says Syed Ibrahim Zaidi, claiming to be the chairman of Taj Mahal Masjid Intezamia Committee.

ASI officials made it clear that no new practice can be started at the monument.

“No new practice can be started at the monument like Taj Mahal and even Supreme Court has endorsed the view that only Friday namaz is permitted at Taj Mahal. Yet confusion was created by those who have failed to convince Supreme Court. ASI cannot allow namaz on days other than Friday at a mosque within Taj Mahal premises as it is precedence set,” said Raj Kumar Patel, the superintending archaeologist for Agra circle. He claimed that it is aptly mentioned at the Taj Mahal that namaz is allowed only on Friday.

Recently a seer wearing saffron was stopped from holding a ‘Dharam Sansad’ at Taj Mahal and was sent back to Ayodhya.

UP: Spanning across 5 districts, 84-kosi parikrama starts after 2-year hiatus