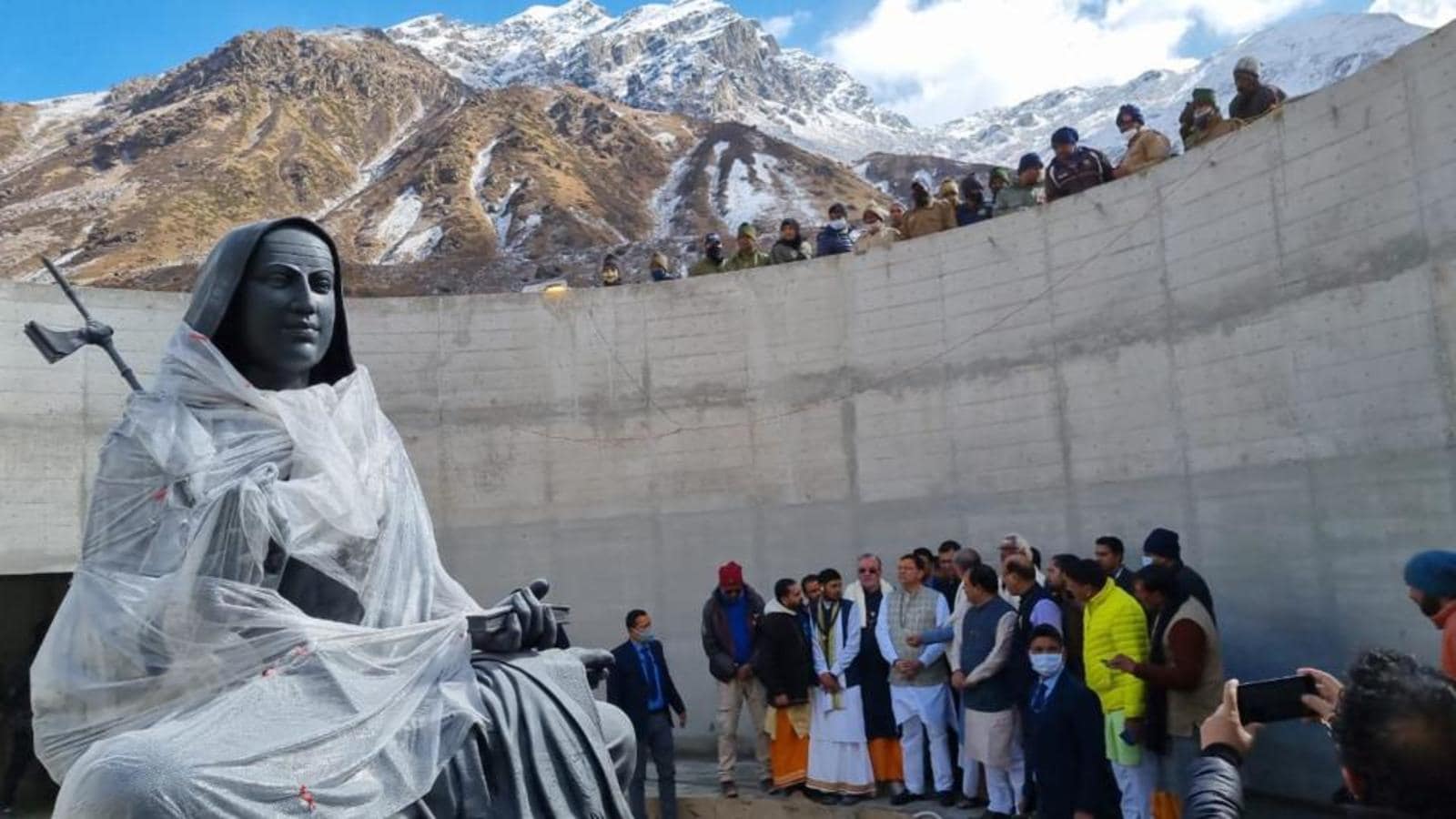 Adi Guru Shankaracharya’s 12 feet tall statue at Kedarnath, weighing 35 tonnes, has been made by Mysore based sculptors from Chlorite Schist Stone, which is known to withstand rain, sunshine and harsh climate, said tourism officials. The statue, to be unveiled by Prime Minister Narendra Modi on November 5, has been polished with coconut water to bring out its shine, the officials added.

The unveiling of the statue will be live-streamed at the rest of the 11 Jyotir Lingas, four maths (monastic institutions) and major Shiva Temples, Uttarakhand chief minister Pushkar Singh Dhami said.

Mysore’s Yogiraj Shilpi, a sculptor rooted in five generation of craftsmanship, completed the work on the new statue with help from his son, Arun. Yogiraj Shilpi was contracted by the Prime Minister’s Office (PMO) after a nationwide search. Yogiraj started making the statue in September 2020 with around 120 tonnes of stone procured for its carving. The sculpture, which weighs around 35 tonnes, depicts Adi Shankaracharya in a sitting position, said officials.

The tourism officials said both the Centre and the state governments were equally committed to the reconstruction of Kedarnath Dham, to be done in phases, for which more than ₹500 crores was sanctioned.

State tourism minister Satpal Maharaj said reconstruction works in Kedarnath would not have been possible without the vision of Prime Minister Narendra Modi. “We welcome his presence here soon. He will also be inaugurating the second phase of reconstruction works at Shri Kedarnath,” he added

Uttarakhand’s tourism secretary Dilip Jawalkar said, “I would like to thank PM Narendra Modi and Jindal Steel Works for their generous efforts towards rebuilding the monument. We are firm that this establishment will not only manifest the belief of devotees in the teachings of this great sage but will also help in getting further tourist footfall in the state.”

The Kerala born Adi Shankaracharya was an 8th-century Indian mystic and philosopher who consolidated the doctrine of Advaita Vedanta and made a significant contribution in unifying Hinduism by setting up four mathas (monastic institutions) across India. Uttarakhand Himalayas hold much significance in the context of Adi Shankaracharya as he is said to have taken samadhi here at Kedarnath. It was in Uttarakhand where he established one of the four mathas at Jyotir Math here in Chamoli district and also established the idol at Badrinath.

Home décor: How to declutter and create an organised space

Yami Gautam starts her day with a glass of hot turmeric...

Elliot Page memoir ‘Pageboy’ to be published in 2023