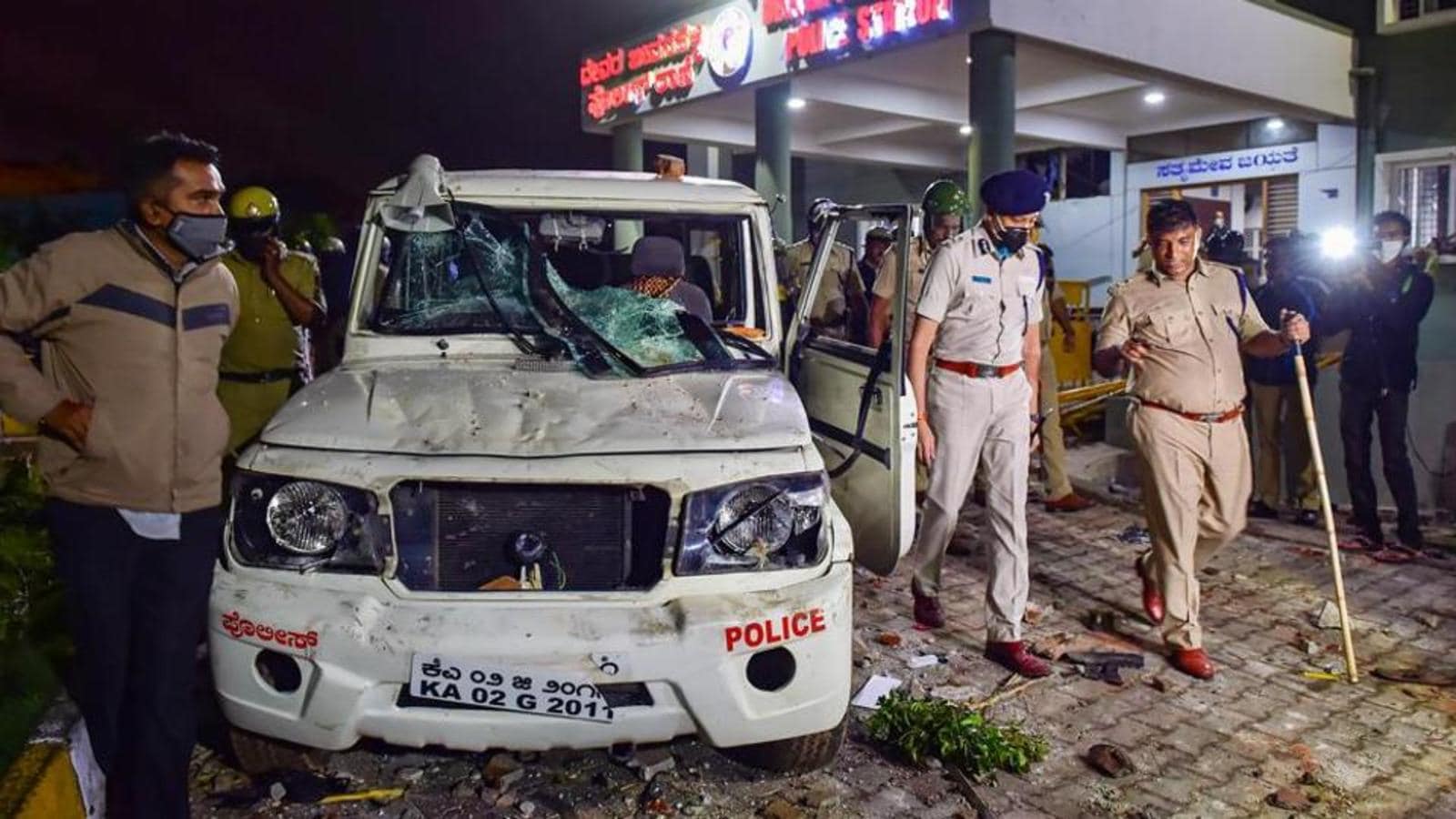 It was the first day after his college reopened after the Covid-induced lockdown and 21-year-old Dilip Kumar decided to stop at Sri Anjaneya temple near Doddabalapura on the outskirts of Bengaluru city before heading to his college on October 31. His mobile phone rang as he was offering prayers and the priest asked him to get out of the temple. He obliged, but when he returned after taking a call outside, he saw a temple official, Prakash, using a phone inside the temple. When Kumar questioned Prakash, a barrage of abuse followed, and he was thrashed at the temple office.

Muni Anjinappa, a Dalit leader of the Praja Vimochana Chaluvali who has been helping Kumar with the case, said that what followed the abuses was more brutal. “First of all, the abuses were caste-related, and they kept asking who he (Kumar) was to question Prakash. Then seven people dragged this young man to the temple office. They hit him and even gagged him using a piece of cloth. He is still undergoing treatment,” said Anjinappa.

So far, two people have been arrested in the case. Anjinappa said that they will continue their protest until all suspects are behind the bar. Police said they were trying to track the remaining five accused in the case.

According to a senior district police officer, after a theft was reported in the village temple a few months ago, the temple’s priests restricted entry only to themselves. The Dalit man had taken a vow to conduct some prayers in the temple. On September 14, he entered the temple for prayers. When the priests came to know about it the next day, they demanded that he make amends by offering a feast.

In this case, Karatagi police filed a suo motu case against eight people —the priest, Revanayyaswamy, Shekharappa, Sharanappa, Prashant, Basavaraj, Durgesh, and Kadappa Nayak—under the Scheduled Caste and Scheduled Tribes (Prevention of Atrocities) Amendment Act, 2015 and sections 504, 149 of the Indian Penal Code, after protests from a local organisation. All suspects got bail soon after arrests.

In another incident on September 4, parents of a Dalit boy were fined ₹23,000 after their 2-year-old son entered a Hanuman temple on his birthday at Miyapura village near Hanumasagar in Koppal district. According to people aware of the incident, Dalits in the village are not allowed inside the temples and they only pray from outside. In this case, however, no complaint was filed as after a mediation meeting held by police, the temple authorities did not pursue the incident following an apology by the Dalit family. “No case was registered,” said a local police officer, who was not willing to be identified as he was not authorised to speak to media.

Dalit activists in the state said that such incidents are being reported in urban and rural areas of Karnataka. “Generally such atrocities are associated in the rural parts of the state. But if you look at the recent cases, they are reported around Bengaluru, the so called IT capital of the country,” said Mohanraj M, a Dalit activist.

Activists also say that these are the incidents that have been reported but there are several unreported cases across the state, which show that discrimination against Dalits is rampant in the educationally advanced state of Karnataka.

“In this August, a Dalit boy, around 9-year-old, was pushed by a temple trustee and he broke his leg. The incident happened in a village in Devanahalli, not too far from the international airport. His crime was that he went to get prasada (food offering) during a temple festival. The case didn’t come out for weeks because the family was scared. It was only after we interfered an FIR was registered. So, you can imagine, how many more such unreported cases there are,” said Anjinappa.

The incidents of atrocities against Dalits in the state are not just limited to temple entry. On June 10, two Dalit men attempted suicide after they were denied haircuts by people from upper castes in Koppal district. Humiliated and assaulted for asking for a haircut, the two Dalit siblings had consumed pesticides, activists said. Both men are out of danger now. But, police have not taken action against the upper castes, who discriminated against them.

Sanna Hanumantha, a Dalit activist in the district, said the brothers were humiliated by the villagers twice. “Two days before the attack, they had approached the barbers for a haircut, but they were turned back. The barbers told the brothers that they will not cut the hair of the lower caste people. The villagers also warned the Dalit men against entering the upper-caste area,” said Hanumantha.

According to him, the men from the Dalit community used to travel to the town 4 km away for a haircut. “Since there was a lockdown in effect, they were not able to travel. So, they requested the barbers again, but they didn’t budge. The two men felt humiliated after they were abused the second time they went for the hair and consumed pesticide,” he said.

Activists in the district said that this was one of the many instances of caste discrimination in Koppal. “If I have to get a haircut, I will have to go to the town because in the village the upper caste won’t let us get the hair cut in the barbershop. Similarly, we are not allowed inside the restaurants. You will find this in every village in Koppal,” said Nilakanda S, a Dalit activist from Koppal.

Nilakanda, who is a graduate in computer science, says that for job opportunities to drinking water, the Dalits have to struggle in this rural part of the state. “We have problems in even getting borewells dug or getting water connection,” he alleged.

Even the state’s track record in investigating atrocities against SC/STs has been poor. According to the National Crime Records Bureau (NCRB), the conviction rate in cases registered under the SC and ST (Prevention of Atrocities) Act is just 4.6%. In 2020, including the cases from previous years, only 22 convictions were reported in the state, while the number of acquittals stood at 353. In 2019, the conviction rate was 3.8%.

Karnataka has been reporting over 1,000 cases of Dalit atrocities every year. According to NCRB data, 1,325 cases of atrocities against SC/STs were registered in 2018. In 2019 and 2020, these numbers stood at 1,504 and 1,398. The data also showed that among the states, Karnataka transferred cases related to SC/ST atrocities to another state or agency. The state transferred 41 cases registered under SC/ST Act to different agencies for investigation in 2020.

An ADGP rank officer who didn’t want to be named claimed that that out-of-court settlements and false cases are some of the reasons for the low conviction rate. He said that special officers are being designated to investigate the cases of discrimination against Dalits.

Reacting to incidents of atrocities against Dalits in the state, the head of SC/ST commission and BJP legislator Nehru Olankar said, “We are aware of these incidents and the police are taking strict action in these cases. In all incidents, police have registered cases and we want to assure people that action will be taken if such discrimination takes place in any part of the state,” he said.

I will not join any other political party: Yashwant Sinha

Man arrested for duping people across India through Ponzi schemes

Explained: What the coming to power of Bongbong, son of the...