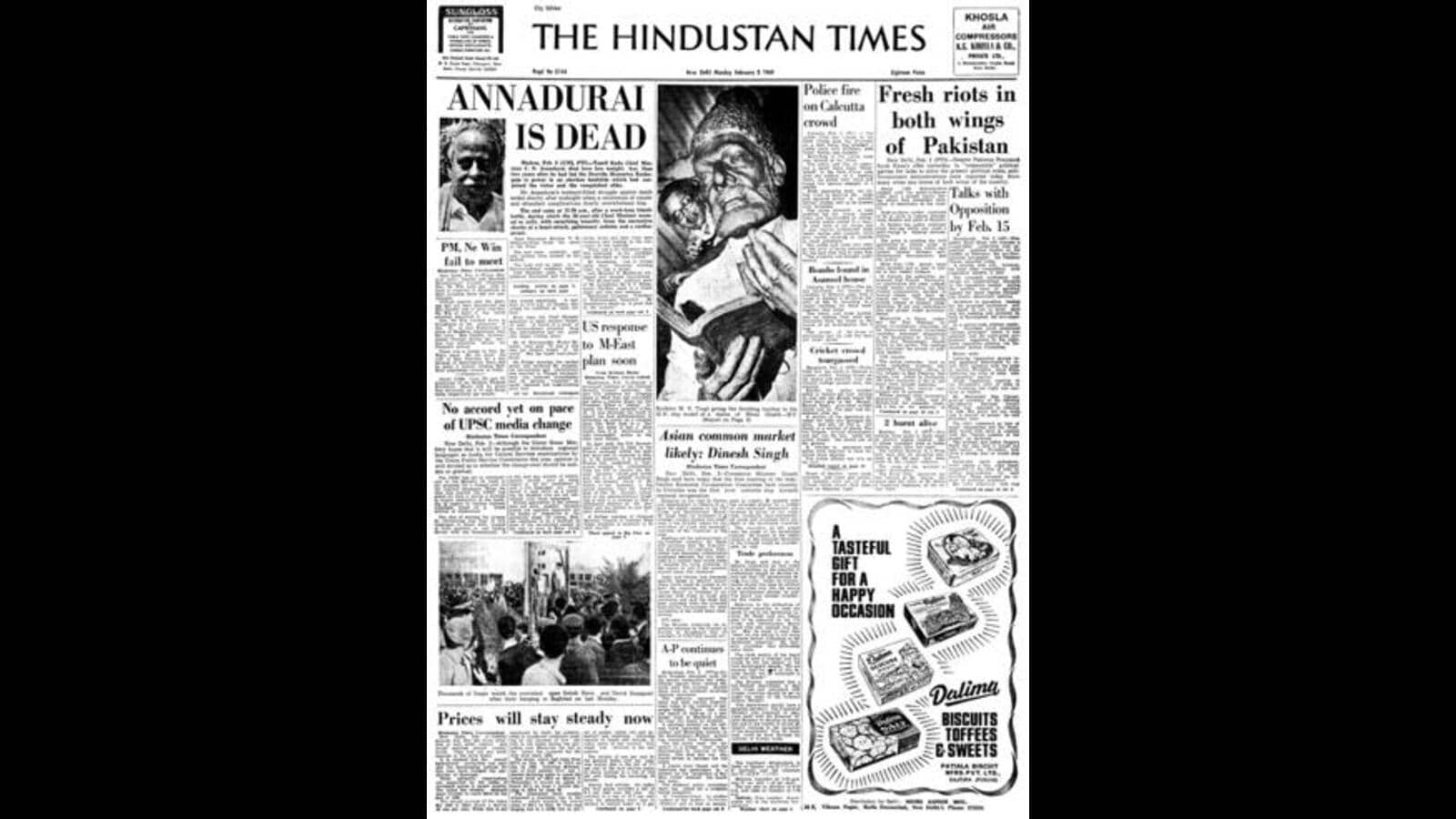 Tamil Nadu Chief Minister C. N. Annadurai died here late tonight, less than two years after he had led the Dravida Munnetra Kazhagam to power in an election landslide which had surprised the victor and the vanquished alike.

Mr Annadurai’s torment-filled struggle against death ended shortly after midnight when a recurrence of cancer and attendant complications finally overwhelmed him.

The end came at 12-20 a.m., after a week-long titanic battle, during which the 59-year-old Chief Minister seemed to rally, with surprising tenacity, from the successive shocks of a heart attack, pulmonary oedema and a cardiac arrest.

The end came suddenly, and only doctors were present at his bedside. The body will be taken to his Nunyambakkam residence here.

Late Saturday night, his blood pressure fluctuated and his pulse rate soared alarmingly. A bulletin at 2:15 a.m. on Sunday described his condition as “very critical.”

Even then, the Chief Minister appeared to stage another fantastic rally. “A fourth of a drop” of an extraordinary powerful drug was administered and the pulse rate began coming down.

Mr M. Karunanidhi, Works Minister, then said: “It was a war that the doctors fought in the ward.” But the hopes were shortlived.

On Friday morning, the cardiac arrest had rendered Mr Annadurai unconscious and tracheotomy was resorted to. Though his heart beat was restored immediately and he became “rousable,” he never regained full consciousness after that.

All his Ministerial colleagues broke down and they were seen weeping and wailing in the corridors of the institute.

There was a bit relaxation since this afternoon as his condition was described as “less critical.”

Mr Annadurai was in virtual coma since Thursday evening when he had a stroke.

Conjeevaram Natarajan Annadurai, affectionately called ‘Anna’ (elder brother) by millions of Tamil people, was born on September 15, 1909. He had his school education in his home town Conjeevaram. Later he was sent to Madras where he was a student of the Pachiappas College for six years.

It was while in college that he became interested in politics. The founders and trustees of the Pachiappas College were staunch followers of the “Justice Party” and Mr Annadurai was also drawn into it. With his capacity for incisive analysis of public issues .and interest in public affairs, he actively participated in the literary activities of the college and served as Secretary of the College Union as well as the Economics Union.

After graduation (Master of Arts degree in Economics), he worked for a while as English Assistant in a Madras school and during this period developed interest in labour activities. Later he also worked as an employee of the Municipal office in Conjeevaram.

Annadurai entered active politics as a result of his admiration for and close association with Mr E. V . Ramaswamy Naicker, founder of the Dravida Kazhagam.

Annadurai was a great public speaker, He kept large audiences spellbound for hours, both in English and in Tamil. In one of the largely -attended public meetings in Madras city during his election campaign in 1967 which catapulted him and his party into power in Tamil Nadu, he said: “The Congress brand of socialism has not reduced but increased inequalities between the rich and the poor and made the rich richer, through monopolies and privileges. It made the poor poorer by reason of rising prices resulting in inflation brought about by its imprudent plan expenditure and deficit financing.”

Annadurai founded the Dravida Munnetra Khazhagam in 1949 when he and his close colleagues in the Dravida Khazhagam felt indignant by the decision of Mr Ramaswamy Naicker, their leader, to marry 26-year-old Mani Ammi, one of the party workers. They felt that by this marriage, the septuagenarian leader of the self-respect movement had brought ridicule on their party and made it a laughing stock of the people of Tamil Nadu.

In the second general elections in 1957 in which his party contested, the DMK could secure only 15 seats out of 215. Five years later in the third general elections, this number increased to 50. In the fourth general elections the DMK party returned with an absolute majority and became the ruling party, with 138 members in a House of 284. Mr Annadurai was the unanimous choice of his partymen for Chief Ministership.

Annadurai served as member of the State Assembly between 1957 and ‘62. In the third general elections he was defeated by a Congress candidate in his home town and so was unseated from the State Assembly. His party, however, elected him to the Rajya Sabha in 1962 out of their quota.

In 1967 he contested a seat to the Lok Sabha from the Madras South Parliamentary constituency and was elected with a huge majority. He had to resign this membership on his assuming the Chief Ministership of the State. He was elected to the State’s Legislative Council by the Madras Local Authorities Constituency in April 1967.

Annadurai toured Singapore and Malaysia in 1965 at the invitation of Tamilians in these countries. He availed of this opportunity to visit Hong Kong, Cambodia and Japan and acquainted himself with the progress of these countries. This was his first tour abroad. At the invitation of the American Government he toured the United States of America for a month in April-May 1968.

Annadurai married Rani Ammal while still a college student. They have no children. But Annadurai had adopted four sons, children of close relatives.

As Chief Minister since 1967, Annadurai endeared himself to the people by his humility and earnest endeavour to find solutions for their problems. He provided for the State a stable administration and managed the State’s affairs with great ability and tact.

A firm believer in democratic ideals, Annadurai had always advocated eschewing of violence in word and deed, in politics and public life. Annadurai had also been an ardent supporter of basic reforms like prohibition.

As Chief Minister, Annadural had been advocating more decentralization of powers and for a fresh re-alignment of Centre, State relations. He thought the Centre ought to concern itself only with Defence, Communications and Foreign Affairs, and leave the rest to the States to manage. He had been leading for the setting up of a Constitutional commission to go into the working of the Indian Constitution during the last 20 years and thought such a commission could spell out what changes need to be made to make the States more self-reliant without detriment to the unity of India.

Anna was a prolific writer from his early years. He edited ‘Bala Bharathi’ and ‘Nava Yuvan,’ Tamil weeklies published from Madras during the ‘thirties. He served as sub-editor of ‘Justice.’ an English weekly of the South Indian Liberal Federation. He was also on the editorial staff of “Viduthalai” (Freedom,. a Tamil daily of the Dravida Khazhagam as well as its weekly “Kudi Arasu.”

In the ‘forties, he founded and edited Dravida Nadu, a Tamil weekly, published from Conjeevaram. Annadurai was also a well-known playwright and is the author of several books in English and Tamil. He had a flair for writing to his followers with an intimate touch about what he wished to convey to them: Until he became Chief Minister, he was regularly writing a “Dear Brother” column in his English weekly which he founded in 1957.

Rajaji said of him immediately after he became Chief Minister of Tamil Nadu in 1967 : “A good leader who has displayed abundant commonsense whenever I discussed any problem with him. He is humble and adjustable and | I hope he will make good as I an administrator.”

Winter ends with fewer snow events and on a warm note

What to do with the Adhikaris? As the family again needles...

CUET UG 2022 Result: When and where to check score card