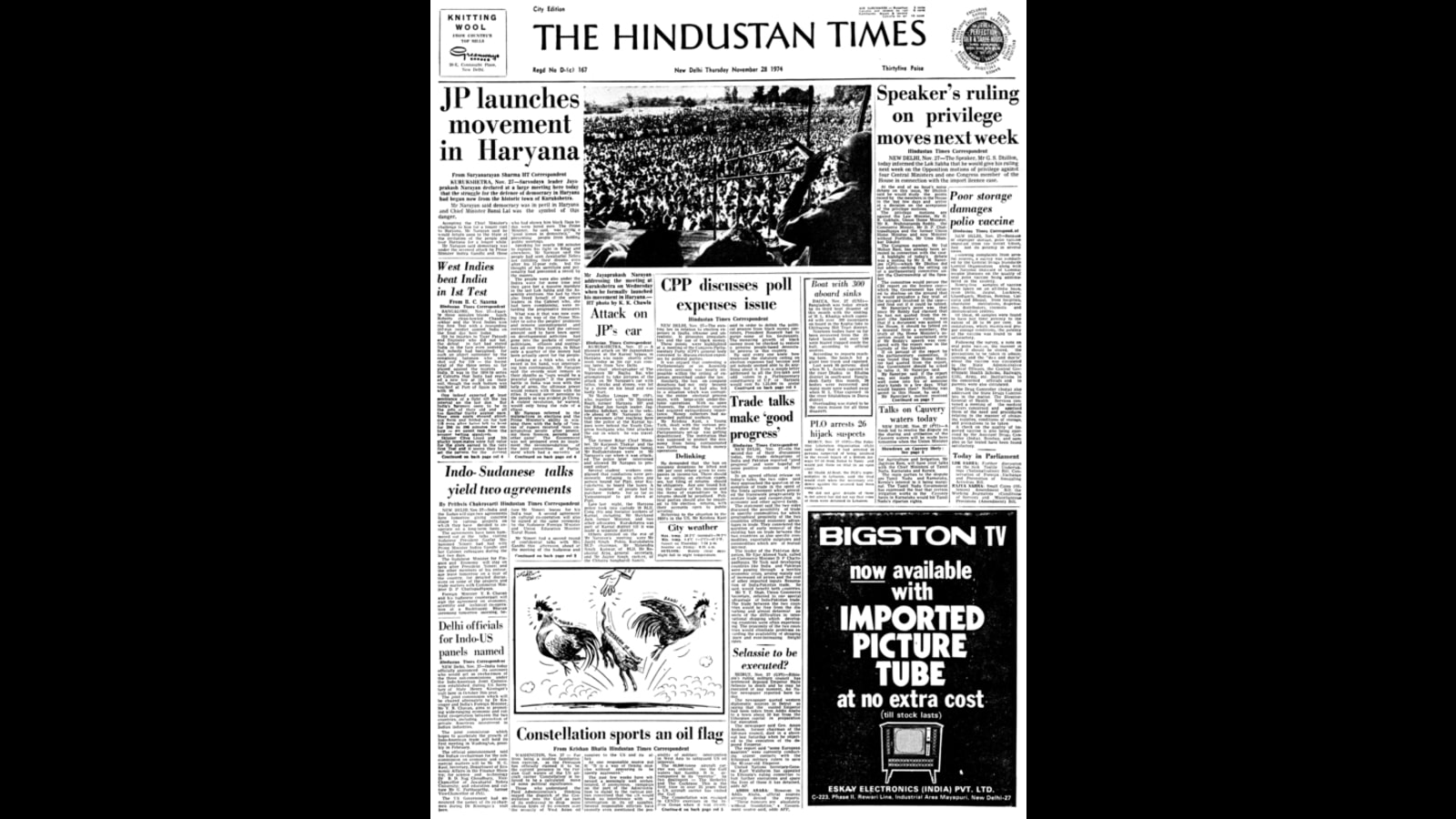 Kurukshetra- Sarvodaya leader Jayaprakash Narayan declared at a large meeting here today (November 27) that the struggle for the defence of democracy in Haryana had begun now from the historic town of Kurukshetra.

Mr. Narayan said democracy was in peril in Haryana and Chief Minister Bansi Lal was the symbol of this danger.

Accepting the Chief Minister’s challenge to him for a longer visit to Haryana, Mr. Narayan said he would return soon to the State at the invitation of the people and tour Haryana for a longer while.

Mr. Narayan said democracy was under the severest attack by Prime Minister Indira Gandhi and those who had shown him black flags today were hired men. The Prime Minister, he said, was giving a “good lesson in democracy,” by preventing people from holding public meetings.

Speaking for nearly 100 minutes to explain his fight in Bihar and elsewhere, Mr. Narayan said the people had seen Jawaharlal Nehru not fulfilling their dreams even after his 17-year rule, but the thought of his sacrifices and personality had prevented a revolt by the masses.

The people were also under the Indira wave for some time and they gave her a massive mandate in the last Lok Sabba and the Assembly elections. She had by then also freed herself of the senior leaders in the Cabinet who, she had been complaining, were retarding the progressive measures.

What was it that was now coming in the way of the Prime Minister to solve the peoples’ problems and remove unemployment and corruption. While half the colossal amount said to have been spent on developmental activities had gone into the pockets of corrupt politicians, officers and contractors all over the country, in Bihar only a quarter of the money had been actually spent for the people.

Looking at a Sikh who, with a sword in his hand, was interrupting him continuously, Mr Narayan said the swords must remain in their sheaths as “ours would be a peaceful struggle.” If the present battle in India was won with the help of arms, the ultimate power would remain with those with the rifles. It would never percolate to the people as was evident in China. A violent revolution, he warned, would only bring the rule of a clique.

Mr Narayan referred to the malpractices in elections and the Prime Minister’s ability in winning them with the help of “crores of rupees received from unscrupulous people after promising them licences, permits and other gains”. The Government was not prepared even to implement the recommendations of the joint committee of Parliament which had a majority of Congressmen and which had studied the subject.

He said the gherao of Parliament by a million people in December was aimed at bringing to an end the electoral malpractices and focus attention on the peoples’ misery caused by widespread unemployment, the sky-high cost of living and the ever increasing corruption.

A meeting of the co-ordination committee of the opposition parties has been called in New Delhi tomorrow to finalise the date of the gherao of Parliament.

“They are repeatedly giving us sermons on democracy and accusing me of attacking democratic principles. But I want to ask both of them from which book on democracy they have learnt to obstruct people even from exchanging views.”

Healthy foods to consume when fasting, according to Ayurveda

FCRA renewal of 466 NGOs rejected over failure to meet criteria:...