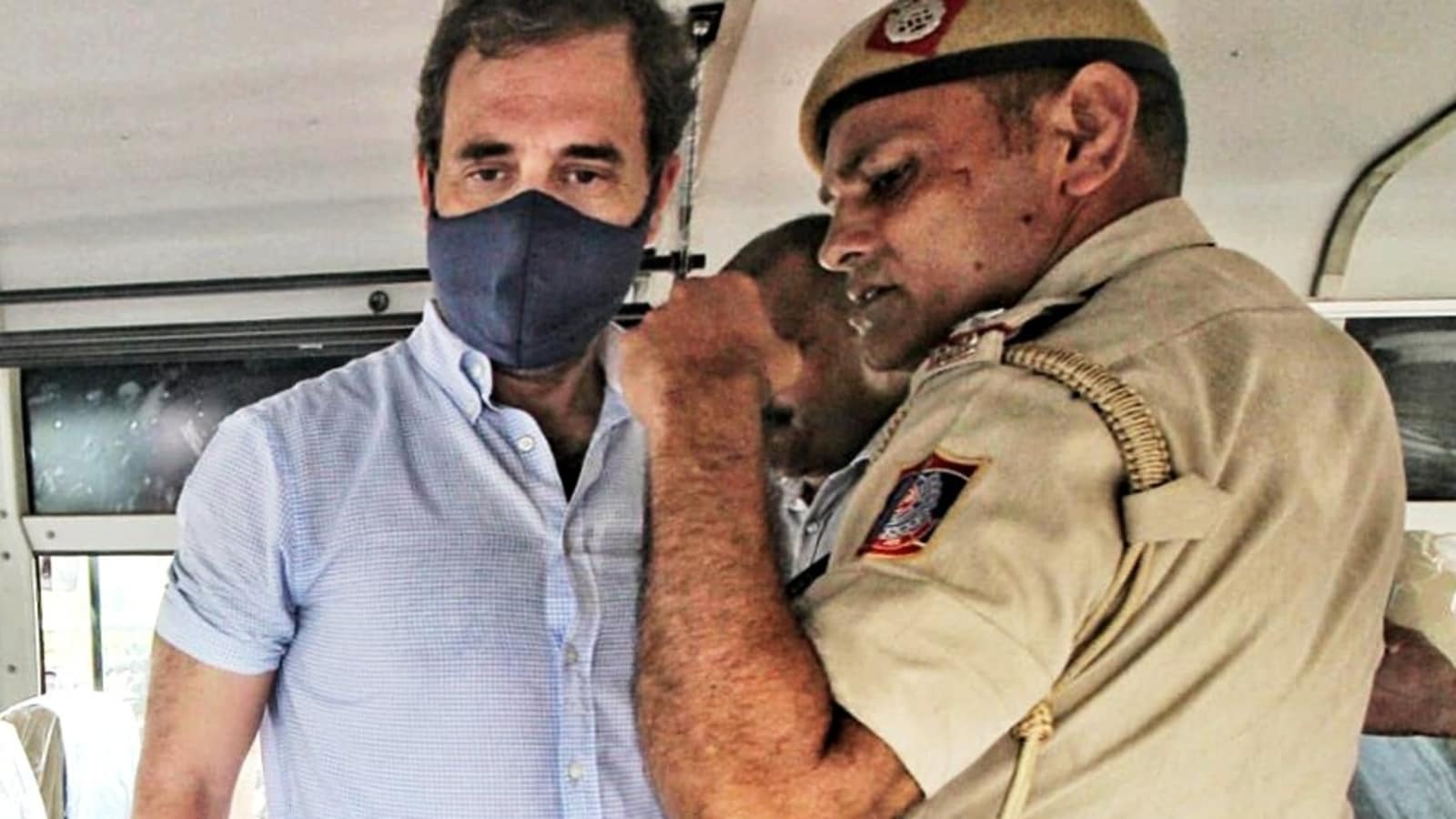 Congress MP Rahul Gandhi was detained by Delhi Police Tuesday amid vociferous and frenzied protests over Sonia Gandhi being questioned for the second time by the Enforcement Directorate in connection with the National Herald case. The Congress’ protest was a planned one, with MPs marching from Parliament with the intention, news agency ANI said, of presenting a memorandum to the newly sworn-in president Droupadi Murmu.

Rahul Gandhi and dozens of other MPs, including Mallikarjun Kharge, the leader of the opposition in the Rajya Sabha, were taken away in buses to the Vijay Chowk police station.

“All (Congress) MPs came here. They talked about inflation, unemployment. They (the police) are not allowing us to sit here. Discussions are not allowed inside (the Parliament) and here they are arresting us. This is the reality of India that it is a police state, it is the truth… Modiji is a ‘raja’ (king),” he said.

“We’re protesting as per the instruction of the police. All of this is a conspiracy by prime minister Narendra Modi and (union home minister) Amit Shah to completely destroy the opposition and muzzle our voices. We won’t be scared, our fight will continue,” Kharge said.

Visuals shared by news agency ANI showed chaos, confusion and ruckus on Vijay Chowk, with hordes of reporters/camerapersons surrounding Rahul Gandhi and a few police personnel forming a ring around him as they take him away to be detained. One video showed a pitched battle between Congress workers and police, including some in Rapid Action Force uniforms.

The video appears to show a group of police personnel fighting off some Congress workers while another grabs a man – who seems to be Rahul Gandhi – by the scruff of his neck.

The Congress also staged a protest inside parliament, where the Rajya Sabha and Lok Sabha were adjourned over protests against price rise and the GST row.

The Congress has accused the centre of using government agencies to ‘muzzle (the) voice of (the) opposition’ – an attack on the ED’s summons to Rahul and Sonia Gandhi over the National Herald case.

“Government agencies are being used to muzzle (the) voice of (the) opposition and to target Congress leaders. They’re just left with the work of targeting and sending notices to opposition leaders and are being misused. Centre snatching our rights to protest democratically,” Sachin Pilot said.

Sonia Gandhi is being questioned, for a second time, by the Enforcement Directorate. The first time she was questioned was last week. But she was allowed to leave after a few hours since she has just recovered from Covid-19.

The Congress chief reached the ED office in central Delhi at 11 am, accompanied by armed security and Rahul and Priyanka Gandhi Vadra.

Priyanka stayed back and Rahul left soon after to lead the Congress MPs’ protest. Last month Rahul was grilled in the same case – money laundering allegations related to the National Herald – for 50+ hours over five days.

With input from ANI

Property dealer held for murder of two in Prayagraj

Umar Khalid: In jail for 2 yrs on hearsay statement, what’s...