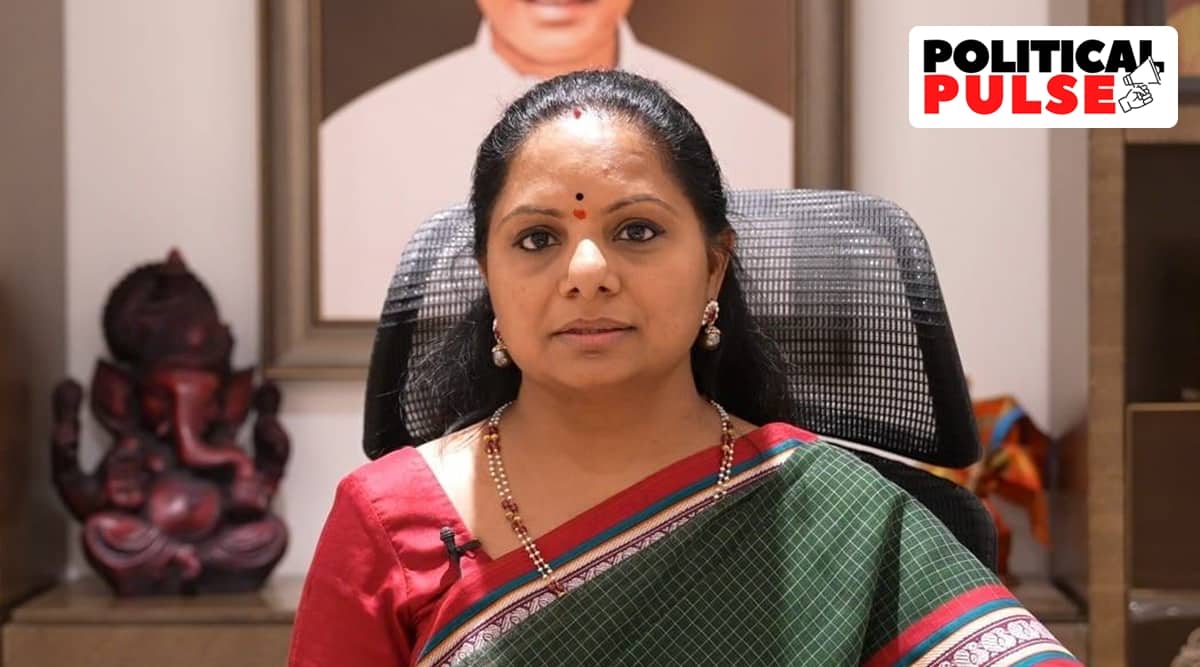 The allegations have surfaced at a time the BJP is trying to make inroads in Telangana and the ruling party, the Telangana Rashtra Samithi (TRS), is pushing back and the fight between the two parties have turned acrimonious. State BJP president Bandi Sanjay Kumar was arrested on Tuesday after he called for an agitation across the state over the allegations against Kavitha. The former MP has denied the accusations.

A computer science graduate, Kavitha completed her master’s degree in the US. She lived there for a few years before returning to India as the Telangana statehood movement gathered momentum. She actively took part in the movement, often leading huge all-women protests. The TRS leader later said that while participating in the movement she became aware of the state’s distinct culture and traditions and became invested in promoting them. In August 2006, just five years after the TRS was formed, Kavitha founded Telangana Jagruthi to promote the culture, traditions, and festivals of Telangana.

Among other things, Kavitha was instrumental in reviving the Bathukamma flower festival. “In spite of being so important and significant for the people of Telangana, it was not so prominent,” she once said. By 2014, when Telangana was formed, Bathukamma had become a popular event. She led the celebrations from the front and over the years it became a part of the state’s cultural calendar and has seen participation by politicians, film stars, and other celebrities, among them badminton star PV Sindhu. The TRS leader was also credited with setting up NRI groups that celebrate the festival abroad.

Kavitha made her electoral debut in 2014 by contesting from the Nizamabad Lok Sabha seat. She took down the Congress’s two-time MP Madhu Goud Yaskhi, defeating her by a massive 1.67 lakh votes.

She was an active parliamentarian, raising issues related to the state. But back home, she failed to address the growing anger among turmeric farmers who were demanding a Turmeric Board for price regulation. TRS insiders said Kavitha normally mingles well with people but failed to connect with the farmers. The BJP took advantage of this divide and in 2019 its candidate Dharmapuri Aravind defeated Kavitha.

Stung by the loss, the TRS leader dropped out of public view for a few months. She returned to public life in October 2020 after being elected to the state Legislative Council from Nizamabad and was re-elected to the House again in December 2021. She has been critical of the BJP-led Centre, opposing the proposal to auction the assets of a Cement Corporation of India unit in Adilabad, price rise, and inflation.

But Kavitha has not given up on hopes of representing Nizamabad once again in Parliament. In May, she hit out at Dharmapuri, pointing out that he had failed to fulfil his poll promise of setting up the Turmeric Board.

The Delhi excise row, however, may impede her efforts to corner Dharmapuri. This is the first time that KCR’s family has come under the cloud of corruption allegations. BJP and some Congress workers have held protests outside Kavitha’s home in Nizamabad but the MLC is intent on riding out the storm. “These allegations are baseless. We are a family of fighters, and we will fight this out. I am filing a defamation suit against Parvesh Verma (BJP MP) and Manjinder Singh Sirsa (former BJP MLA),’’ she said on Monday

Why Mahua Moitra was rebuked by Mamata. BJP has its explanation

Gold-winning daughter Kajol is the topic of pride at father’s pakoda-selling...

UP Police thank their explosive sniffer dog for his ‘pawsome’ contribution