On September 5, 150,000 farmers from 13 states, including UP, gathered at the Government Intermediate College (GIC) grounds for a mahapanchayat under the aegis of the Samyukt Kisan Morcha (SKM), while another 150,000 spilled out on the streets of Muzaffarnagar. On the stage were representatives of 40 farmer organisations, as 1,000 LED screens beamed the proceedings live.

Interview | ‘We’ll have a farmers’ movement in every village’: BKU chief Rakesh Tikait

If the BJP thought the farmers’ protests would die a natural death, the six-hour-long mahapanchayat should come as a rude wake-up call. When Rakesh Tikait, national spokesperson of the Bharatiya Kisan Union (BKU) and the most prominent face of the agitation, took the stage to launch ‘Mission UP’, urging farmers to expel ‘outsiders’ Yogi Adityanath and Narendra Modi; or when he called for a Bharat Bandh on September 27; or articulated one more time the farmers’ demand to withdraw the three new farm laws and write into law the guarantee of an MSP (minimum support price), it might have all sounded like echoes of a voice heard earlier. It was his concluding statement that marked a new register in this ongoing protest: “Now, we will not let the BJP start another riot,” he declared. “If they divide the people, we will unite them. Now, as before, the slogans of ‘Allah Hu Akbar’ and ‘Har Har Mahadev’ will resonate from the farmers’ platform.”

A subtle shift is under way in western UP, and nowhere is this more evident than in Muzaffarnagar, the site of bloody communal riots in 2013. That violence marked the end of a Jat-Muslim unity forged out of longstanding economic hardship and ethnic ties, with the BJP benefitting from the communally charged environment in the 2017 state election. As the Jats and Muslims come together again to make common cause against the Centre’s new farm laws, it appears the farmers are not merely fighting to safeguard their economic interests, they also want to make the BJP pay a political price for stonewalling their demands.

It certainly cannot be good news for the BJP or the Yogi Adityanath government six months ahead of the assembly poll in UP. As Harish Tyagi, the Muzaffarnagar district convenor of the All India Kisan Khet Mazdoor Sangathan, predicts, “There will be a big drop in BJP seats from western UP in 2022.” Western UP has 136 assembly seats, of which the BJP currently holds 103; it also holds 20 of 27 Lok Sabha seats from this part of the state. Going by the 1931 caste census (the last time such an exercise was conducted), 99 per cent of the state’s Jat population is concentra­ted in six mandals of western UP. And while Jats constitute 3.6 per cent of UP’s backward classes, they account for 18-20 per cent in these six mandals, according to a 2001 report of the Social Justice Committee. Again, 49 out of western UP’s 136 assembly seats have a Muslim population of 30 per cent or more. In 25 seats, Jats and Muslims form more than half the population.

It is these Jats and Muslims whom the BKU is now seeking to unite. National president Naresh Tikait and national spokesperson Rakesh Tikait are enlisting the support of the khap panchayats of the Jats; Naresh, who belongs to the Baliyan khap, is, in fact, the head of the Sarvakhap panchayat, a collective of all the khaps of UP. The September 5 kisan mahapanchayat was supported by all the major khaps of western UP. The Gathwala khap, which had stayed away from the farmers’ movement, was won over when its thanbedar (head) Shyam Singh was entrusted with the responsibility of presiding over the mahapanchayat.

Simultaneously, the BKU is activating the organisation from the state to the village level. Rajveer Singh Jadaun has been made state president. He has been given four vice-presidents to assist him. A president has been appointed for every mandal, district, block and village. The contours of the wider movement are decided on the basis of feedback from village committee meetings. 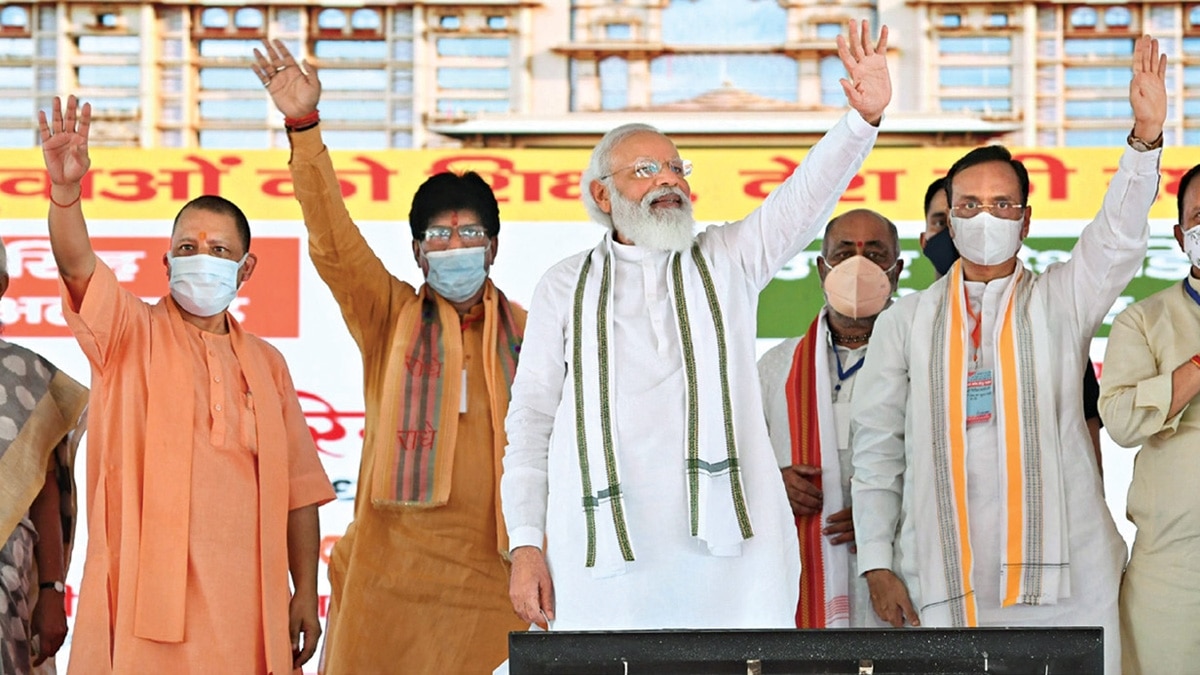 However, while all this may help the BKU successfully mobilise an anti-BJP vote, how does it propose to persuade its supporters to elect parties other than the BJP, especially given that it has so far kept away from all of them?

On their part, all anti-BJP parties have pledged support to the farmers’ cause. Congratulating farmers a day after the mahapanchayat, Samajwadi Party leader and former UP chief minister Akhilesh Yadav said the BJP should show respect for the farmers’ struggles and repeal the farm laws. Bahujan Samaj Party leader Mayawati lauded the spirit of Hindu-Muslim unity at the mahapanchayat while Congress general secretary Priyanka Gandhi Vadra castigated the “arrogance of the government”. Rashtriya Lok Dal chief Jayant Chaudhary, son of Jat icon Chaudhary Charan Singh, also said the government instead of resolving farmers’ issues, has chosen to browbeat them.

The problem, as Dr Baburam Malik, who has been running a clinic for the past 43 years in the Jat-dominated Sisauli town of Muzaffarnagar, points out, is that “the anti-BJP parties in UP are not active on the ground”, making BKU the chief opponent of the BJP’s farm policies. Not only that, the BKU, says Dr Kalam Singh, former head of the sociology department at DAV College, Muzaffarnagar, “will have to integrate forward castes like Tyagi with the backward Saini, Kashyap and Gurjar castes, besides uniting Jats and Muslims to make the farmers’ movement effective in western UP. By joining the forward castes, these backward castes can make a difference in 60 assembly seats in western UP. In 2017, these small castes had rallied in favour of the BJP.”

Aware of the shifting ground, the BJP has begun damage control. On Sep­tember 14, Prime Minister Narendra Modi laid the foundation stone of a state university in Aligarh named after Jat king Raja Mahendra Pratap Singh. He also used the occasion to invoke other Jat leaders such as Chotu Ram and Charan Singh, saying how the latter, too, cared for the small farmer. The PM said all the Centre’s efforts, be it MSP, kisan credit cards, crop insurance or pension scheme, are directed at empowering small farmers. By focusing on the small farmer, the BJP is trying to engineer another split in the farmers’ movement and rob it of its ballast.

Chief Minister Yogi Adityanath, too, has been meeting with farmers’ bodies every month to assess their grievances. He has also withdrawn the cases filed against the farmers arrested for burning stubble. The Yogi government also says it is implementing development schemes worth more than Rs 10,000 crore in western UP. “These development plans,” says state BJP minister and Saharanpur district in-charge Chandramohan, “have been made keeping farmers in mind.”

The Adityanath government is also contemplating an increase in sugarcane prices, which UP’s 4.5 million sugarcane farmers have been demanding for the past three years. The state advisory price of sugarcane was increased only once, that too by Rs 10, after the BJP came to power in UP in 2017. It may be time to sweeten the deal again.

Why farmers are angry

No fair price for produce

Corruption in government procurement process of the crop due to big farmers-officials nexus. Small farmers compelled to sell crop in open market at prices lower than MSP

Electricity rates in rural areas have increased by 40 per cent in the past four years. In 2017, cost of elec­tricity went up from Rs 900 a month to Rs 1,850 a month for running a 10 HP tubewell. Non-payment attracted surcharge and penalty. All this has added to crop cost. Farmers have also received arbitrary power bills

With their land being procured for large-scale development works in UP, farmers in many districts, including Shamli, Ghaziabad, Bulandshahr and Bareilly, are protesting and alleging less than the prescribed land compensation

Some 750,000 people in UP, who are not small or marginal farmers, are alleged to have availed of the scheme’s benefits. The state government has ordered that such people be identified and action taken against them.

In what could provide relief to more than 10,000 farmers in western UP, the chief minister has ordered the withdrawal of cases registered for burning of crop stubble

A one-time settlement (OTS) scheme for interest subvention on old power bills will be implemented. Power connections will not be cut even is a bill is outstanding

UP farmers will be given a grant of Rs 250 per quintal on paddy and Rs 400 per quintal on wheat seeds. This proposal was approved in a cabinet meeting held on August 16 under the chief minister’s chairmanship

27 modern mandis are in the works so that farmers get a fair price for their produce. In the past four years, 20 agriculture centres have been set up along with 220 new agriculture marketplaces

Cooperative societies and village panchayats will get grants for setting up farm machinery banks. The grant by the agriculture department will cover 80 per cent of the fixed price up to Rs 5 lakh for the purchase of agriculture machinery

To promote the use of solar pumps as an alternative to electricity- and diesel-based irrigation, farmers will be given a 40-70 per cent subsidy on the fixed price of solar pumps

Russia’s Sergey Lavrov is pariah at Group of 20 event, but...